No. 9 Illinois travels to Minnesota, Northwestern in weekend doubleheader 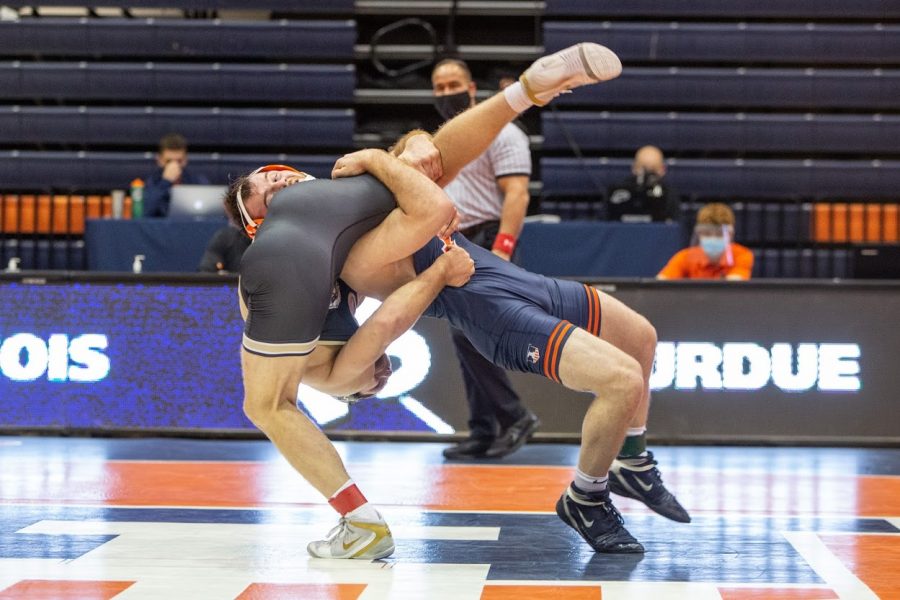 Sophomore Zac Braunagel works to flip his opponent during the meet against Purdue on Jan. 22. The Illini will face off against Minnesota tonight in Minneapolis.

The Illinois men’s wrestling team has a busy weekend, as they will travel to Minneapolis to take on the Minnesota Golden Gophers on Friday, followed by a matchup against the Northwestern Wildcats on Sunday in Evanston.

The 4-1 Illini will look to bounce back this weekend after their first loss last weekend to the No. 1-ranked Iowa Hawkeyes. Friday’s meet will begin at 5 p.m. Central Time and Sunday’s will start at noon.

The Illini are 24-32-2 all-time against Minnesota, and they will face off for the 59th time in school history. They are 49-33-2 against Northwestern, as they match up for the 89th time.

Illinois won two out of the ten bouts last weekend against the Hawkeyes. They were defeated 36-6 in Iowa City.

Freshman Luke Odom picked up his first victory of the season last week after he defeated his opponent in a 10-6 decision.

Redshirt sophomore Zac Braunagel picked up another win last weekend against the Hawkeyes. Competing in the 184-pound bout, Braunagel and Iowa’s Nelson Brands’ thrilling match went into overtime. With a takedown in the first period, Braunagel earned a 3-1 decision victory.

The Golden Gophers are coming off a close victory against Rutgers and will try to build on their recent success. The Wildcats are trying to regroup after falling 29-13 to the Penn State Nittany Lions.

The Big Ten Conference currently has seven ranked teams in the top 25. Minnesota is 4-2 to start the season and is ranked No. 13. The Northwestern Wildcats are 1-4 and are unranked.

The No. 9-ranked Illini are in the top 10 for the third consecutive week, and they have seven wrestlers ranked inside the top 25.

Redshirt sophomore Danny Braunagel is the only starter for the Illini who remains undefeated. Braunagel has been out the past two weeks due to injury and is questionable for both matches this weekend.

“My game plan is just to keep scoring and finding different ways to put points on the board,” said Danny Braunagel on Jan. 10. “If I can keep doing that, I will be satisfied with the way I played personally.”

Both meets will be streamed on Big Ten Network +.