Illini look to carry momentum into tri-meet against Wisconsin, Northwestern 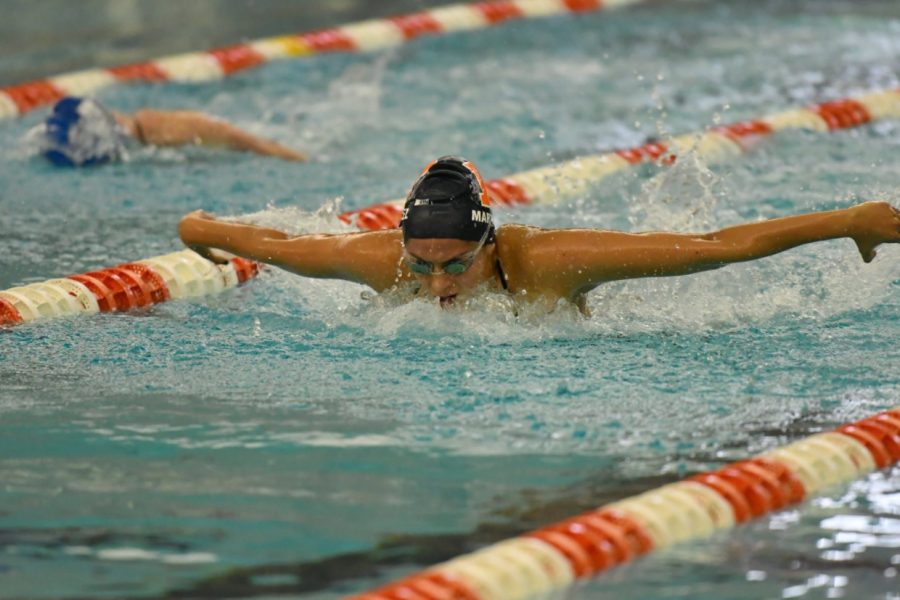 Senior Jimena Martinez performs the butterfly stroke during competition. The Illinois swim and dive team will travel to Madison, Wisconsin this weekend to attend a tri-meet against Wisconsin and Northwestern

The Illini’s women’s swim and dive team will travel to Madison, Wisconsin, this weekend to face off against Wisconsin and Northwestern.

The Illini’s record currently stands at 1-1 after defeating another Big Ten rival, Nebraska, 164-136 on Jan. 23. This meet is gearing up for the Big Ten Championships that will take place at the end of February, which marks this meet as Illini’s final competition before the playoffs.
Wisconsin is coming off of a dual meet victory, with a current 2-0 record after beating Minnesota, 163-133, and Purdue University, 191-104.5, on Jan. 23, while Northwestern’s record currently stands at 2-2. Northwestern defeated Iowa, 225-75, and Penn State, 242-58, during their second dual meet of the season on Jan. 22 and Jan. 23.
Freshman Laurel Bludgen acknowledged the team will be facing some tough competition this weekend but is focused on trying to repeat their strong performances from their previous meet against Nebraska.
“We’re just going to have to continue to be strong competitors against them, keep the energy up as a team and keep the positive momentum from two weeks ago carried with us,” Bludgen said.
Bludgen was a key member on the 200-yard medley and 400-yard freestyle relay teams that helped the Illini seal the win against Nebraska, and she acknowledged that the team’s bye week from competition last week provided much-needed time to sharpen their technical skills.
“I’ve been working on my stroke mechanics, turns and my underwaters, so I’ve been trying to put together all the little things to put together a perfect race,” Bludgen said. “I just want to be the best that I can be in both the pool and my academics, and (I want to) keep my motivation up, so I can continue to get better and make those improvements,” she said.