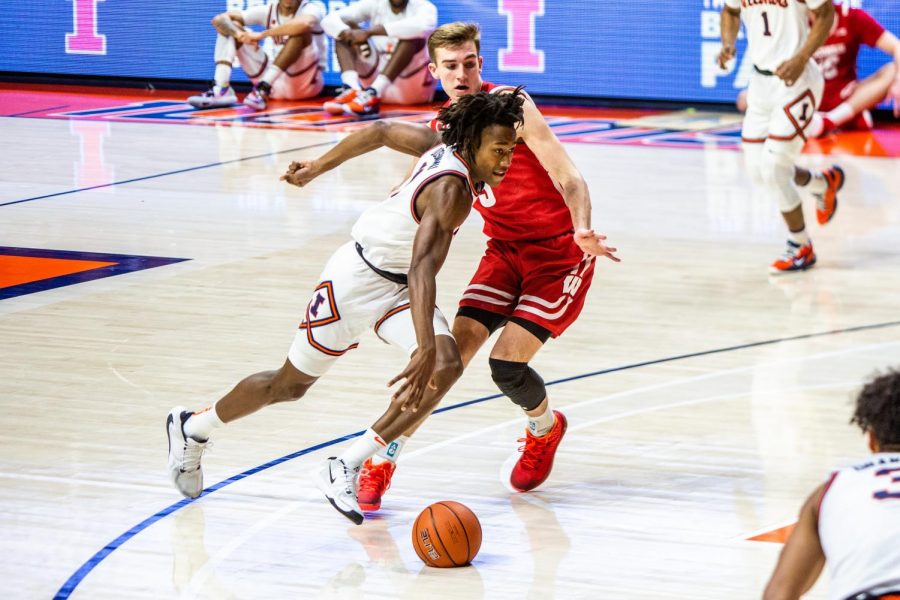 Ayo Dosunmu dribbles past a Wisconsin defender in Illinois’ game on Saturday. The Illini won 75-60.

On Tuesday night, Ayo Dosunmu could only sit and watch as his teammates were forced to play the overtime period without him  in Bloomington. It was one of the rare off-nights this season for the Chicago native.

Dosunmu showed his ability to move on, putting together one of the most complete games of his career, going for his first-ever triple-double (21 points, 12 rebounds, 12 assists) to help Illinois defeat Wisconsin 75-60.

After a slow start against the Hoosiers, the Illini brought energy early against the Badgers on Saturday. Dosunmu found Kofi Cockburn over the top and dropped a beautiful lob over the top for a Cockburn slam. The junior guard and sophomore center were in sync consistently on Saturday, and Dosunmu assisted Cockburn on five field goals.

Every time the Badgers crept in, Dosunmu or Cockburn seemingly made a play. Wisconsin cut it to five halfway through the first half, but Dosunmu came off a ball-screen, looked off Cockburn on the roll and fired a pass to Trent Frazier in the corner for three, who calmly knocked it down.

Dosunmu also showed why he’s a 20-point-per-game scorer. With the first half winding down, Dosunmu sized up Tyler Wahl, took two dribbles forward before dribbling the ball back and forth between his legs, hung the ball in his right hand before crossing over to his left. He glided to the rim and finished with his right hand, giving Illinois a 36-23 halftime lead.

Another reason the Badgers never found their rhythm was Illinois’ stingy defense. The Badgers shot 9-30 from the field in the first half and finished the game 4-24 from deep. Illinois limited Wisconsin to just two offensive rebounds while grabbing 11 themselves. Cockburn was a monster on the glass, going for 23 points and 14 rebounds. His performance was inspired by his teammates.

“My coaches and teammates got on me,” Cockburn said. “Ayo came to me and said, ‘I see you do this thing every day in practice. You dominate, you have energy and you dunk the ball. Do that same thing in the games.’ I tried to come out there and listen to my teammates.”

Dosunmu’s Illinois legacy was already a special one. His goal of bringing the program back to national relevance was completed last season. Now, anything else appears to be a cherry on top. Like the third triple-double in school history or any subsequent NCAA tournament games and wins that will come down the line. Saturday’s game was just another example of how special Dosunmu is and another place where his name will be forever etched in the record books.