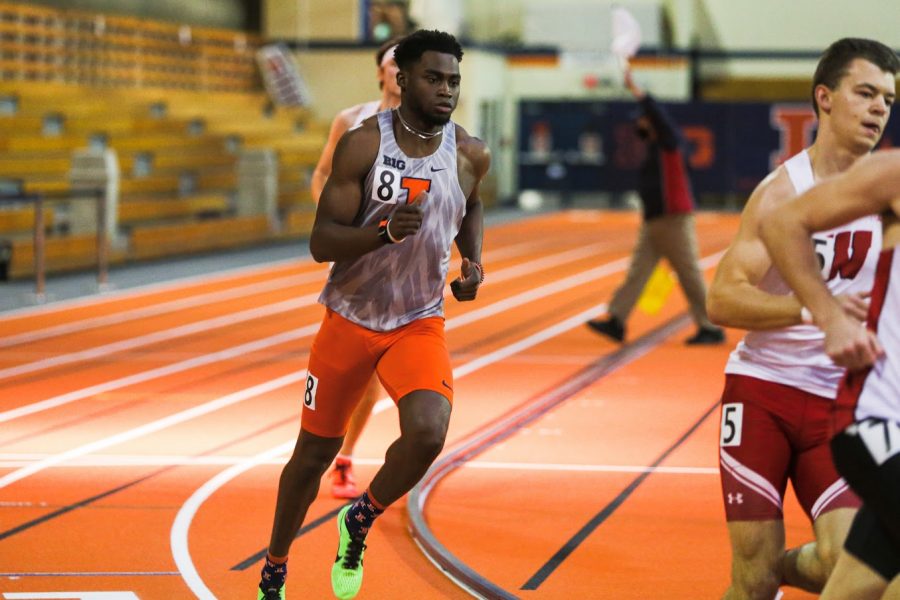 Sophomore Alexander Babbington competes in a running event during the Illini B1G Multi-Meet on Jan. 30.

After having cross country steal the show last week, the track team was back in action as a team Saturday, traveling to Lincoln, Nebraska, for the Husker quad. The Illini, combined with strong performances in both the track and the field, was able to put up a fight against their Big Ten rivals.

Manning Platter’s influence over Illinois’ success has translated quickly — and often. Platter, a senior who transferred from Michigan, continues to carry the Illini to new heights in the weight throw.

While nobody on Illinois took home top honors in the women’s long jump, the Illini showed off depth that could compete with the Cornhuskers.

Junior Amira Aduma, sophomore Nicole Ngyuen and junior Nya Carr placed in second, seventh and 10th place, respectively, keeping up with the dominant Cornshukers, who had four of the five top finishes, while easily topping the Golden Gophers.

Aduma, who had the best performance out of the bunch, finished with a jump of 5.83 meters, which fell four-tenths short of first place.

The men’s 800-meter dash was dominated by underclassmen, and the Illini were able to put up a well-rounded performance. While first place went to Iowa’s Alec Still, Illini sophomore Will O’Brien and junior Phil Hall placed second and fourth, respectively.

O’Brien finished with a time of 1:54.13, giving him a personal record in the event. Despite finishing fourth, Hall only finished .28 seconds behind his teammate.

The women’s team performed very well in the 400-meter dash, allowing the Illini to flex off versatility and speed.

Senior Felicia Phillips gave her best performance yet in an orange and blue uniform, finishing with a time of 55.04. The Tennessee native, though, fell just short of placing first in the 11 person event, with Janielle Josephs holding off her with a time of 54.93.

Phillips wasn’t the only Illini giving a great performance, though. Freshman Jessica McDowell didn’t back down from the older competition and nearly took 2nd place for herself with a time of 55.18.

While the Illini put together fine performances in most events — save from the 3,000-meter dash, which the Illini sat out of — Illinois had a monopoly in the women’s 800-meter dash, putting the Big Ten conference on notice.

Illinois not only took home first place in the event; they placed first, second and third in the event, and the closest competitor didn’t even finish within a second of them.

Spearheaded by sophomore Olivia Howell, the first place winner placed a full second ahead of her teammate with a time of 2:09.84. Howell continues to show off her wide-range of talent, as she set the school record in the 1000 meter dash earlier in the year in Madison, Wisconsin.

Next up for the Illini is a road trip to an Iowa Hawkeye event. While it seems like the season just started, next week’s road trip to Iowa City is the regular-season finale before the Big Ten Championships in three weeks.