Illinois looks to bounce back in Columbus for tri-meet with Ohio State, Michigan State 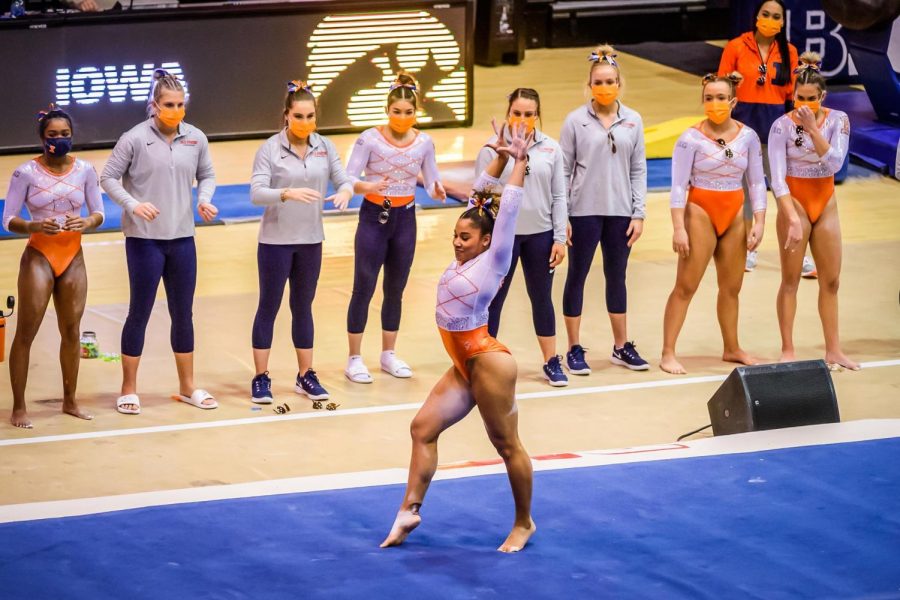 Junior Shaylah Scott performs her floor routine during competition. The Illinois women’s gymnastics team will travel to Columbus, Ohio, for a tri-meet matchup against Ohio State and Michigan State this Sunday.

This Sunday, No. 20 Illinois travels to Columbus, Ohio, for a tri-meet matchup against No. 26 Ohio State and No. 17 Michigan State.

Ohio State is 1-3 and coming off a second-place finish at a tri-meet with Michigan State and Nebraska.

“Everybody needs to have the confidence that they can do a routine at any time at any place for the team and just keep reminding each other that we’re family,” said junior Shaylah Scott. “And we’re all working towards a common goal, and we’re not going to get to that goal if we’re doubting ourselves. So, we just have to believe that we are a great team, and we’ll be a great team.”

Illinois is coming off a loss in the home opener at Huff Hall to No. 9 Iowa. The Illini started off the season red hot with a four-meet win streak to start the season undefeated. Illinois was also 2-0 in Big Ten play for the first time since the 2006-2007 season.

“It was a good performance. We all agreed, but it could have been better obviously, but we’re really proud of where we’re moving,” Scott said. “It may seem like we are not moving, but we actually had to count a fall, and we ended up getting a score that we got in our season opener. … So that in itself is just a major improvement and then going 49 plus on two events and getting the highest vault score of the season was also a plus.

“So we all definitely came away from Iowa knowing what we needed to work on, and we had full intention of fixing everything, and we were just ready to come back stronger than ever and to start a new streak out.”

Originally Illinois was supposed to host No. 7 Michigan on Saturday, but the meet was postponed because of COVID-19 issues at Michigan.

During the week, the mindset of the team was to control what you can control — stay in the moment and stay grounded, prepare as if the meet didn’t get canceled and don’t focus on whether a match is going to be scheduled or not. Focus on your gymnastics and how you can improve.

This is something head coach Nadalie Walsh has preached, as she rebuilt the culture at Illinois while also reinforcing the themes of radiating confidence and staying united as a team and family.

“Every week … it’s going to the gym … looking for small amounts that you can improve on every week,” Scott said. “You do your routine, but on every single routine, you try to find the pins off of your last score. … Every week is about growth, and everybody has an opportunity to grow every week, no matter if we did win or lose.

“Nobody’s ever perfect, and so just kind of knowing that, going into me, just knowing that you’ve been consistent with whatever you were doing is like ensuring as well.”