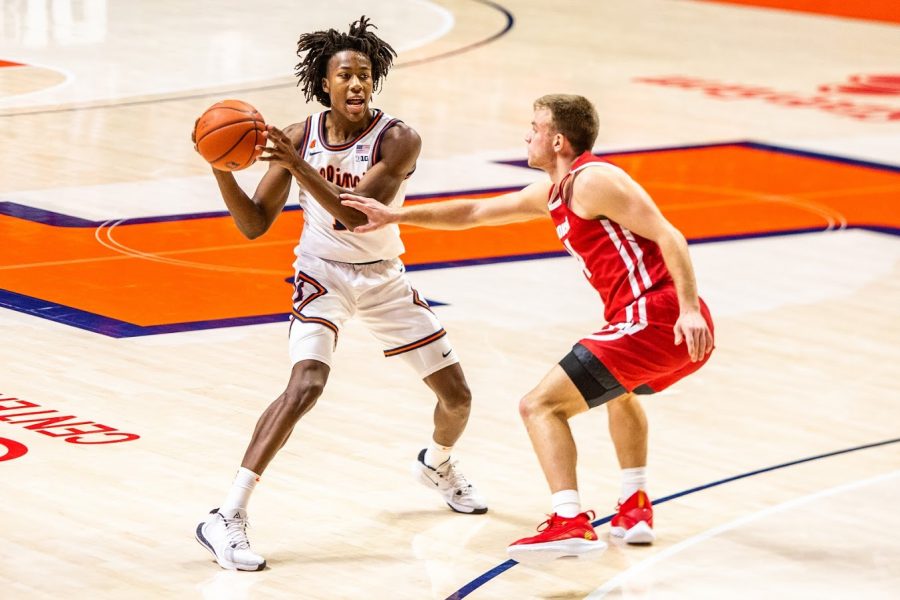 That’s probably the most fitting word for Illinois’ performance on Saturday afternoon against No. 19 Wisconsin, completely outplaying the visitors from start to finish. After an ugly, hard-fought win against an unranked Indiana Hoosier squad on Tuesday, the Illini looked like a completely different team against a Badger team that was ranked one place above them to start the season.

Games like this serve as a reminder that Illinois has a legit shot at making a deep tournament run in March, with a fast-paced offense, aggressive defense and high energy during pregame warmups to the final whistle. The Illini outmatched the Badgers in almost every facet of the game for all 40 minutes, leading to a dominant 75-60 win to extend the team’s win streak to four games.

A triple-double from junior Ayo Dosunmu and a double-double from sophomore Kofi Cockburn are easily the highlights from the Illini’s 15-point win, but let’s take a look at eight performances from Saturday afternoon’s victory.

How often does a player finish with a double-double yet isn’t the player of the game? That was the case for Cockburn on Saturday afternoon, notching a game-high 23 points and 14 rebounds for his 13th double-double of the season, which is also tied for the most in all of college basketball.

Cockburn made every Badger player look small, dominating in the paint on both offense and defense. He also took full advantage of Ayo Dosunmu’s delightful dishes in the paint, finishing with eight (yes, you read that correctly) dunks. The Jamaica native brushed aside everything Wisconsin threw this way for one of the best games of the season.

Cockburn’s size and physical presence on offense and defense is a huge plus for the Illini, and they will need the sophomore center to keep putting together dominant performances like this if they look to make a deep run in March.

This is a no-brainer.

After one his worst performances against Indiana on Tuesday, a game in which he fouled out down the stretch, Dosunmu put together a historic display against the Badgers, going for a triple-double (21 points, 12 rebounds and 12 assists), the first of his Illinois career and only the third in program history, with the last one occurring in 2001.

Everything Dosunmu did was essentially perfect, both on offense and defense. The Chicago native set the tone early with his high energy and intensity, and that certainly rubbed off on his teammates. Not only did he get things done on offense, frequently finding Cockburn in the paint for easy dunks, the junior guard got things done on defense as well, holding starting guard Brad Davison to zero points while also forcing two steals.

Dosunmu’s selflessness on and off the court shows why he’s one of the best players in all of college basketball, and performances like this should remind us how influential Dosunmu has been on this basketball program ever since first announcing his commitment to Illinois. He is a special player, and Saturday’s game was a beyond special display from the third-year Illini guard.

Three-pointers are the freshman’s specialty, though his production from beyond the arc has dried up a bit as of late. Miller’s production on Saturday, however, was much more promising, as he finished with six points, including going 2-4 from deep, and two steals.

Miller has been impressive on defense as of late, bringing high intensity and energy even when his scoring has slightly decreased. His two steals, including one where he came out of seemingly nowhere to pick redshirt junior forward Micah Potter’s pocket. This type of awareness is crucial, and his confidence in his three-point shooting is essential for both Miller and the Illini moving forward.

Another important note: the Illini are undefeated since Miller bleached his hair. That can’t be a coincidence, right?

Frazier’s last three performances have been nothing short of incredible, becoming the third piece of Illinois’ three-headed monster alongside Cockburn and Dosunmu. This afternoon, the senior guard played well once again, finishing with eight points, two rebounds and two assists, which is somehow his worst outing over the last nine days.

Typically tasked with defending the opposition’s best player, Frazier guarded Wisconsin’s star guard, D’Mitrik Trice, who finished with 22 points. But that doesn’t really tell the whole story, as the entire Badger offense ran through him, and Trice hit several tough shots with Frazier in his face and tightly contesting every shot.

Passion is the name of the game for Frazier, and that quality was obvious as the senior dove on the floor to grab a loose ball after forcing a turnover. The Florida native exemplifies everything that Brad Underwood’s team is about: energy, teamwork and passion, and the Illini will certainly face a huge loss next season without Frazier.

Since replacing Da’Monte Williams in the starting lineup, Grandison has impressed on both ends of the court, using his silky smooth shot and intensity on defense to fit right in on Illinois after sitting out last season due to NCAA transfer rules. Against Wisconsin, Grandison played well yet again, finishing with five points and four points.

Grandison is never going to put up jaw-dropping numbers, but he has found his groove as a role player, as he makes shots when he needs to yet steps aside when Dosunmu or Cockburn are playing well. The Illini know they can rely on the redshirt junior, and on Saturday he shot 40% from the field on 2-5 shooting, including 1-3 from behind the arc.

The Holy Cross transfer has solidified his place as a starter in Underwood’s team, and his solid defense and shooting display against Wisconsin further proved his value in this Illinois team.

A seven-point, two-rebound performance for the junior forward won’t turn any heads, but Bezhanishvili doesn’t necessarily need to put together high-scoring performances to have a good game. Against the Badgers, the Georgia native’s energy and tight defense was extremely important, helping the Illini get into second or third gear any time their engine seemed to slow.

You can’t teach Bezhanishvili’s passion, and his loud screams as he sprinted down the court in the second half was just one instance of the impact he has on this team. His leadership and positivity, regardless of the score or opponent, is essential to this Illini team, as he is always willing to pick his teammates up any time their heads are down.

Bezhanishvili brought the energy on offense and defense, and his 75% shooting performance was the highest over the last three games. The junior is one of the most influential player on this squad, even if he doesn’t put up double-digit points every game.

Andre Curbelo: F
It’s hard to put into words how bad Curbelo was on Saturday, but I think Brad Underwood said it best: “What the h— was that?”

After a solid 12-point performance on Tuesday, the freshman guard looked all over the place on Saturday against Wisconsin, going scoreless while picking up two fouls and four turnovers despite playing just eight minutes. Every shot Curbelo took was nowhere close to going in, and he looked indecisive every time the ball was in his hands.

Deemed a “one-man wrecking crew” following a shockingly poor run in the second half, it’s easy to understand why Curbelo didn’t step on the court again after getting subbed out with just over 13 minutes to play. Let’s hope the Puerto Rico native can put this game behind him quickly, as this was certainly his worst game in an Illini uniform by a country mile.

In the first half, Williams looked down and out, especially after he picked up a flagrant foul with just over seven minutes to play in the first half, and it seems like he was going to have another frustrating outing.

But in the second half, the Peoria native looked like a completely different player, and he ultimately finished with five points and nine rebounds. His energy significantly improved in the second half, and he hit his first three-pointer since Jan. 16 to overcome recent struggles from beyond the arc.

Williams’ defense was also much more impressive in the second half, something he’s struggled with over the last few games. Underwood and the Illini need to hope Williams can keep putting together solid outings, and he will likely see an increase in playing time.