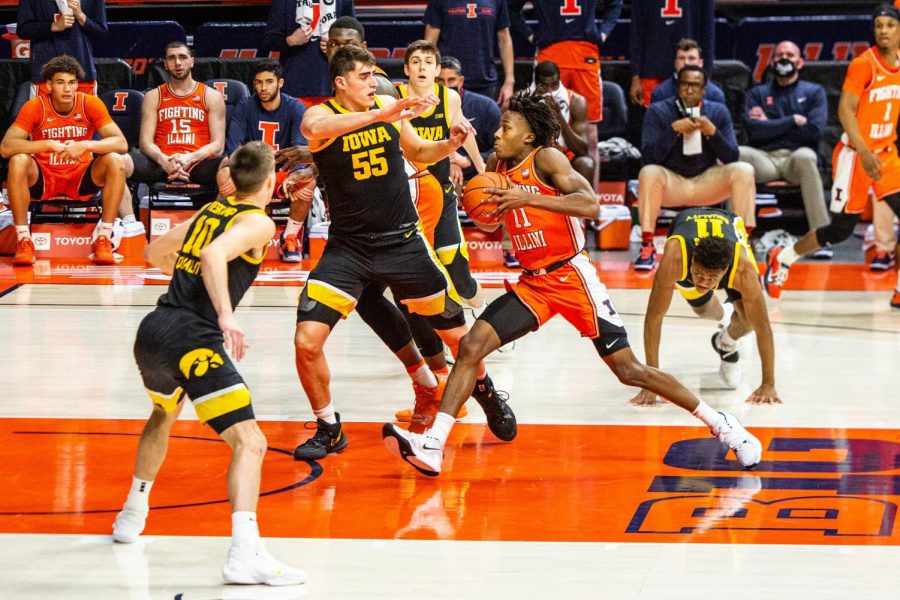 Ayo Dosunmu drives to the basket in Illinois’ game against Iowa on Jan. 29.

After three straight wins, No. 12 Illinois will look to make it four straight when the No. 19 Wisconsin Badgers come to Champaign on Saturday. Let’s break down some of the keys to Saturday’s game, the first of two match-ups between the teams this season.

Who dictates the pace?

The pace of play is always a massive key when playing the Badgers. The Badgers rank 311th in pace, averaging 68.1 possessions per game. They prefer to slow teams down and grind out possessions. They have the eighth best defensive efficiency, per KenPom.

Meanwhile, the Illini prefer to get out in transition, averaging just under 74 possessions per game. In Wisconsin’s four losses this season, opponents have scored 70 points against them. Given their stingy half-court defense, the Illini will need to make them run.

How do Illinois’ bigs guard the perimeter?

After facing more traditional back-to-the-basket forwards in Luka Garza and Trayce Jackson-Davis, the Badgers will bring a much different look. Senior Micah Potter is averaging 12.3 points per game and making 37.5% of his shots from deep.

“Good athlete length and a really good perimeter shooter,” Underwood said of Potter. “He’s a guy that stretches the floor, and he can score on the block. He’s not just a one-hit-wonder. He’s got tremendous skills.”

Senior forward Nate Reuvers has had a down year, but he still shoots two threes a game, so Illinois will need to utilize its diverse power forwards. Jacob Grandison will start, but Da’Monte Williams could be a good option when the Badgers play small. If Wisconsin plays Reuvers and Potter together, that could be a good opportunity to play Giorgi Bezhanishvili with Kofi Cockburn. Bezhanishvili was +23 in 16 minutes against Indiana, something Underwood noticed.

“We get better defensively, that’s one of the things I really like about it,” Underwood said of the pairing. “Giorgi is an unbelievable off-ball defender. He does a really good job of keeping the ball out of the post with his denials, fronts, three-quarters because he’s got great feet and he gets around people.”

Does the Morgan Park duo bounce back?

Illinois was able to withstand Indiana despite a combined 3-17 shooting from the Chicago natives, Ayo Dosunmu and Adam Miller. Against a better Wisconsin team, the Illini will need one, if not both players, to return to form. Miller has been slumping as of late, making just four of his last 17 attempts from deep and averaging 4.3 points in the past three games.

In the sole meeting between the two programs last season, Dosunmu turned in a complete game, going for 18 points and six assists. The Badgers don’t really have anybody with his length at the guard spot, so I expect another strong game from Dosunmu in this match-up.

Does Trent Frazier continue his “heater?”

While Miller has struggled, Frazier has stepped up, averaging 18 points per game over the past three. He had a season-high 24 points against Iowa, and he hit some crucial shots down the stretch against Indiana. For Illinois to win, they typically need a strong outing out of Dosunmu, Cockburn and one of the role players. Illinois is 7-1 when Frazier scores in double figures.

The game is scheduled for 1:30 p.m. Central Time and can be watched on Fox.