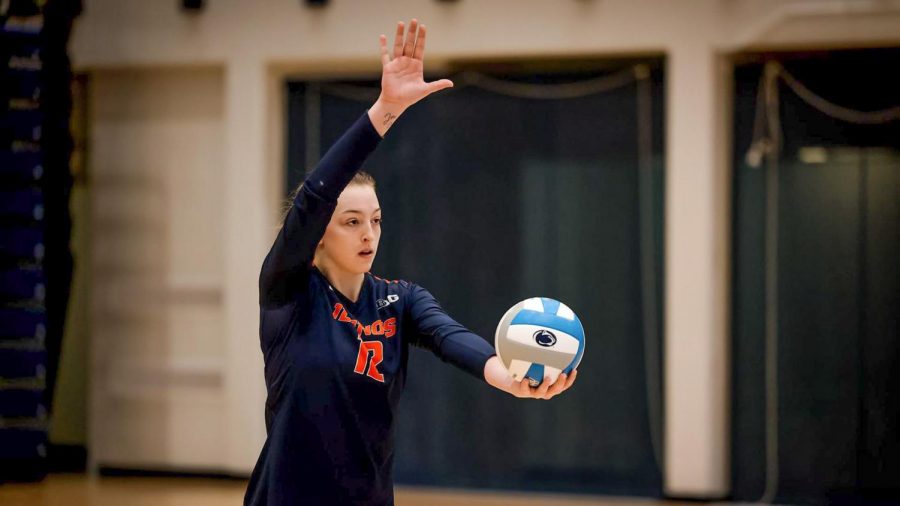 Freshman Raina Terry winds up to serve the ball during the match against Penn State on Saturday. The Illini fell to the Nittany Lions 3-1 and 3-2 in two matches.

Illinois dropped a pair of close matches to Penn State this weekend, losing 3-1 on Friday and 3-2 on Saturday. Friday was Penn State’s first match of the season, and with the team having significant roster turnover, there was little Illinois could do to prepare in the film room.

Heading into the weekend, it was announced that Ellie Holzman would be out four to six months with a torn ACL, shaking up the team’s rotations. In her absence, freshman Raina Terry and senior Emily Hollowell saw additional playing time and will likely continue to throughout the season.

“Emily’s been with us for a while and hasn’t had the chance to play,” said head coach Chris Tamas. “Raina’s of course a freshman; it’s not often you ask freshmen to take a heavy load, and especially playing six rotations, playing backcourt, playing frontcourt, taking big swings and going through the match. I’m pleased with what I see.”

Terry saw an increased workload over the weekend, with 20 attempts on Friday and 42 on Saturday. With such little notice, it’s been a bit of an adjustment for Terry.

“I was ready for the intensity of the practices, but the curveball of the competition of the Big Ten was hard to adjust to,” Terry said. “With Ellie going down last week, I had to take a six-rotation role. That was a lot of pressure at first, not going to lie. I leaned on my teammates and especially my coaches. My coaches told me that they believed in me, so with that support I was able to get through it and play like myself this week.”

The lack of film on Penn State was quickly apparent on Friday, with Illinois getting out to a slow 11-2 start before calling a timeout after which they seemed to adjust and settle in. They ultimately recovered and battled back, outscoring Penn State 18-14 the rest of the way. It wasn’t enough to win the set, but Illinois carried their momentum into a dominant second set, winning 25-17.

Afterward, Illinois remained competitive but lost the next two sets 25-20, showing symptoms of a consistent problem for Illinois this season: keeping their foot on the gas late in matches.

“You’re playing against good competition, and as the match goes on, with an inexperienced team, they just have to learn how to lock in a little bit better with focus,” Tamas said. “I told the team last week that I’m not disappointed. We’re not giving up easy points, it’s just a lack of experience. I feel that as we get more experience in those situations we’ll be better for it.”

On Friday, senior Megan Cooney was the standout contributor, putting up a career-high 20 kills and surpassing 1,000 total career kills, a major milestone. With Holzman out, Cooney’s attempts have gone through the roof, tallying 45 attempts on both Friday and Saturday.

This would be the high point of the day for the Illini, however, as they looked lethargic from that point on, losing the fourth set 25-15 and the fifth set 15-8. This was Illinois’ first time going to a fifth set this season, and the pressure and length of the match may have worn on some of the younger players.

“It can be frustrating when you are that close, but we gotta figure out how to turn the corner,” Tamas said. “Happy that we’re in battles because we’ve got to be there to get there. We’ve just gotta figure out how to turn a few more points and a few situations that I think are controllable, and I think those matches will end in our favor. We still have a young team and an inexperienced team that we’re getting to know each other. The more chances and opportunities that they have in big moments like this, the better they’ll end up getting.”

Looking forward, it seems as though Illinois may have a week off from competition with the cancellation of their two matches against Northwestern due to COVID-19 concerns. Their next scheduled match comes at home against Ohio State on Feb. 19.