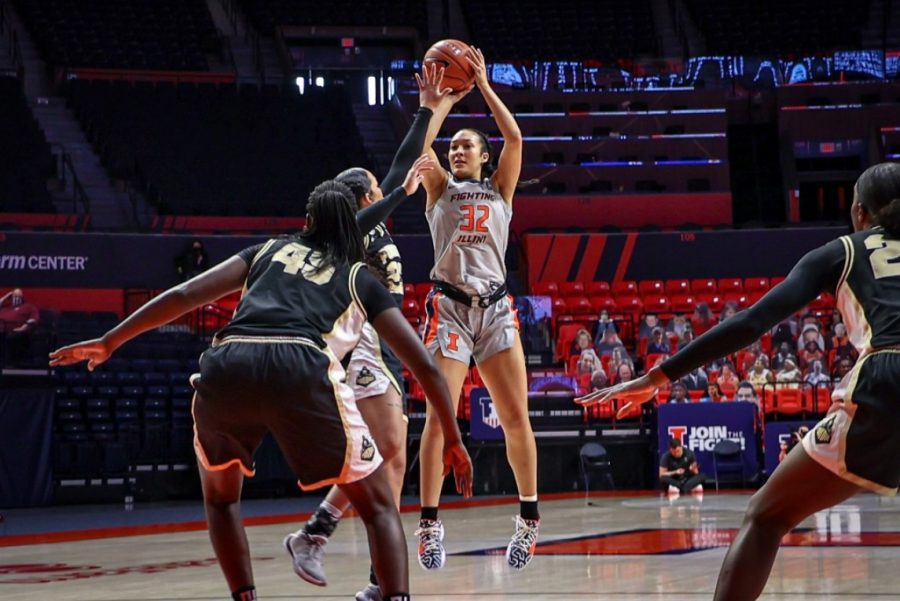 Freshman guard Aaliyah Nye shoots during the game against Purdue on Sunday. The Illini won the game 54-49.

Coming into the game, the Illini were seeking their first conference win and were the only Big Ten team without a win. Purdue has also been a difficult matchup for Illinois, with the Illini last defeating the Boilermakers in 2015. Sunday’s win was the first against Purdue in Fahey’s tenure.

“I was really happy for our team,” said head coach Nancy Fahey.

In Sunday’s game, the Illini got off to a quick start, scoring four points in the first 1:15 of the game. The Illini kept that energy up and held an 8-2 lead heading into the first media timeout. At that time, sophomore forward Kennedi Myles had 6 of the team’s 8 points.

But, after the timeout, Illinois went on an over 3-minute scoring drought before sophomore guard Jeanae Terry hit a bucket to give the Illini a 12-10 lead. A 3-pointer by junior guard J-Naya Ephraim with three seconds left in the first gave the Illini a 15-8 advantage going into the second 10 minutes of play.

The Illini didn’t get off on the right foot in the 2nd quarter, and Purdue went on a 7-0 run in the first 2 minutes of the second, forcing Illinois head coach Nancy Fahey to call a timeout. Immediately after, Ephraim hit a jumper for Purdue’s run to conclude.

A Terry 3-point play cut Purdue’s lead to eight, but the second quarter was brutal for Illinois, getting outscored 24-9.

Coming into the game, Illinois’ goal was to slow down Traylor. Traylor averaged 13.9 PPG and almost scored her average in the second quarter alone, scoring 12 of the team’s 24 points in the second 10 minutes.

Illinois held its own in the first part of the third quarter but went on an almost 3-minute field goal drought. Still down 8 at the media timeout with 3:57 left in the third, the Illini cut Purdue’s lead in half the rest of the quarter, entering the final 10 minutes down 40-36.

With a Terry layup with 9:20 to go, Purdue had a one-score, 40-38 lead. The next few minutes were back-and-forth, and freshman guard Aaliyah Nye made a 3-pointer with 5:55 to go to make it a one-point Purdue lead.

“I just told myself “I’m (going to) make ‘em,” Myles said. “Just having the confidence throughout the whole shot.”

Moore hit a jumper with 57 seconds left to give Purdue a 49-47 edge, forcing an Illinois timeout. After that, Illinois surged and held Purdue scoreless the rest of the way.

A pair of Nye free throws gave the Illini a 54-49 lead and sealed the team’s first Big Ten win. Fahey was happy her freshman guard sealed the game.

“How big was that?” Fahey said. “I’m excited for her future.”

The Illini next play at Minnesota Wednesday, but they’re savoring the moment for now.

“I’m just really excited to get this win and celebrate with my teammates,” Terry said.