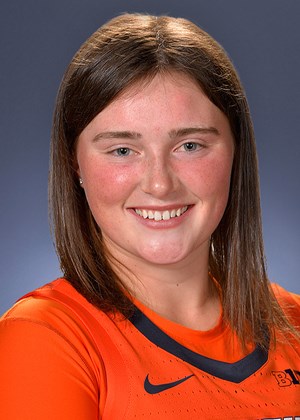 Junior guard Tara O’Malley poses for a player headshot. O’Malley recently walked-on after being a team manager for two years.

Illinois’ team this year has a face unfamiliar to fans, but she’s certainly familiar within the team. Junior guard Tara O’Malley walked onto the team this year after serving as manager for two years.

O’Malley went to high school in Chicago and at the end of her senior year, she was looking to earn a Chick Evans Scholarship, a scholarship given to golf caddies that covers housing and tuition. Illinois has an Evans Scholar house, where recipients of the scholarship live. O’Malley was also in touch with head coach Nancy Fahey but wasn’t prioritizing basketball.

“In my senior year, I kind of had placed all my energy towards obtaining (the Evans scholarship),” O’Malley said. “And then if basketball had worked out with whatever school I was ending up, that was something that I would also try to pursue.”

O’Malley got the Evans scholarship and was able to serve as manager for the women’s basketball team. While serving as team manager, she worked closely with Jenn Dynis, who played for Fahey when Fahey coached at Washington University in St. Louis and was originally the team’s intern and now serves as video director.

When O’Malley originally was a manager, she often did tasks like making sure the athletes had enough water, but over time, she got to practice with the team.

Over the past few years, Fahey got to know O’Malley and her family very well, and after having seen her in practice for a while, the thought of O’Malley joining the team crossed Fahey’s mind.

Then, the COVID-19 pandemic impacted the program, and Fahey found she could use an extra player on the team. She wanted to be sure she was bringing on someone who was a good fit for the program, who understood what it was like to be in the program and who had a strong work ethic.

She didn’t have to look too far to find the person who best met what she was looking for, and the staff knew O’Malley would be an excellent addition to the team.

“You have to have somebody that understands one, our culture and wants to add to our culture, and she (definitely) does that,” Fahey said. “She’s one of the hardest workers, and so it wasn’t really a tough decision. I was very excited when she said yes.”

Dynis got to do the honors and let O’Malley know the coaching staff wanted her to walk onto the team.

“She was ecstatic (when I) asked,” Dynis said. “I think she had always kind of had a goal of trying to walk on, and now that it happened, we are more than happy that she has. She deserved it.”

After coming back to Champaign and quarantining, O’Malley was set to join the team. It took a minute for O’Malley to adjust, and Dynis recalled having to remind O’Malley on her first day she was relieved of her managerial duties.

“She was like, dressed, in there super early … because that’s the kind of kid she is,” Dynis said. “I was bringing all the basketballs and the equipment out and she came in. She was like, ‘Oh, let me help you.’”

“I was like, ‘Tara, you’re not a manager anymore, hon. Like, get out on the court. Start shooting, like you don’t need to help me,’ you know. And she was just like, kind of laughing about it.”

Though O’Malley has only played in a handful of games this season, her teammates are happy to have her on the team.

“She’s probably literally the most positive person I’ve ever met in my life,” said junior guard J-Naya Ephraim. “Previously, when she was a manager, I mean, I seen all the hard work and the potential that she had, so I’m glad that she’s a part of this team.”