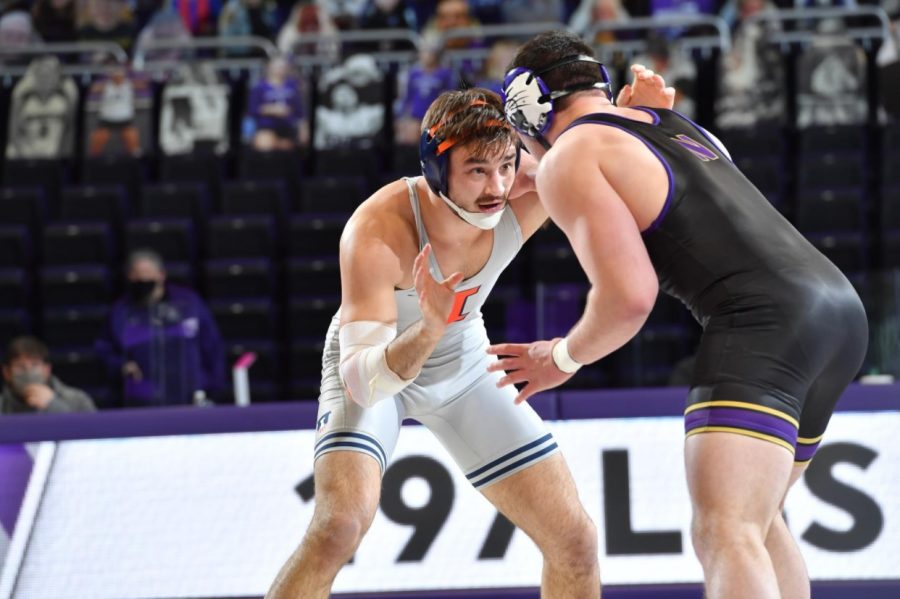 Redshirt junior Matt Wroblewski wrestles his opponent during the match against Northwestern on Sunday. Illinois won the match 31-6.

The No. 9 ranked Illini had a busy past couple of days this weekend, as they were defeated 13-25 by the Minnesota Gophers on Friday. They bounced back Sunday night, taking down the Northwestern Wildcats 31-6. Illinois now moves to 5-2 on the season.

The Illini got off to a quick start on Friday but were defeated in the end by No. 13 ranked Minnesota. The Gophers move to 5-2 on the season.

Lucas Byrd, Dylan Duncan and Mike Carr won three straight bouts for Illinois, but they would lose the next four, giving the Gophers a 19-10 lead.

Redshirt Junior Matt Wroblewski, who competed in the 197-pound bout, picked up a thrilling win in his match. A quick takedown to open up over time would give the Illini three more points to cut the lead to six.

“It’s one of those duels that we let slip away,” Wroblewski said. “There were a couple of close matches that we ended up losing, and at the end, it came down to bonus points. We came out firing, but when things started to not go our way, we let them pull ahead. Momentum is key and we lost that momentum.”

Sophomore Luke Luffman would be taken down by Minnesota’s Gable Stevenson to wrap up the evening.

The Illini were much more impressive on Sunday, defeating Northwestern in Evanston.

“It’s hard to bounce back from a tough loss,” Wroblewski said. “We didn’t have the most pleasant post-meet talk after Minnesota, but everyone responded well. We were more relentless out there and we just let it fly.”

They certainly did let it fly, winning eight out of their 10 bouts on Sunday, including five consecutive victories.

Sophomore Lucas Byrd picked up another victory, as he improves to 5-1 on the season. Redshirt Seniors Dylan Duncan and Mike Carr each picked up victories for Illinois as well.

Redshirt Sophomore Danny Braunagel made his return as he was sidelined for the past three duels due to a hand injury. Braunagel picked up a major decision victory later on which extended the Illini’s lead.

Luke Luffman would defeat his opponent in a 7-2 victory to end the match.

The 5-2 Illini will finish the regular season at the State Farm Center on Feb. 21 as they get set to take on the No. 7 Nebraska Cornhuskers. With a lot of time off the mats, Wroblewski believes the time off will be good for the team.

“We have a really good Nebraska team coming up in a few weeks,” Wroblewski said. “We’ll go over some film, and each guy will reflect on these past couple weeks. It’s a great opportunity to work on things off the mats.”

The final duel of the regular season will be aired on ESPNU, and the start time has not been announced.