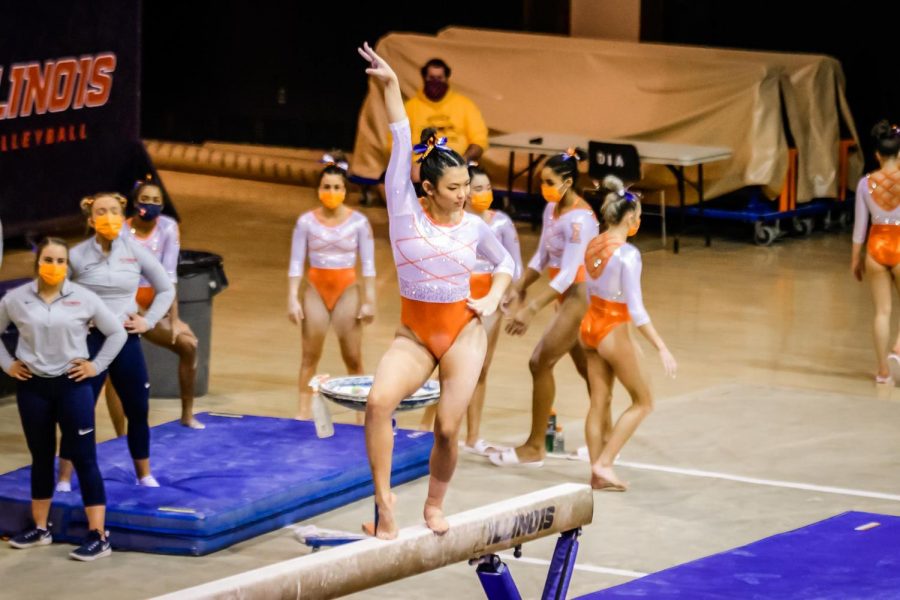 Illinois got its highest point total of the season, led by sophomore Olivia O’Donnell, sophomore Mia Takekawa and senior Kylie Noonan’s individual event titles, but placed second in the tri-meet against No. 17 Michigan State and No. 26 Ohio State on Sunday.

“We asked the athletes to dig deep this weekend and go after every little thing. We wanted to make sure they enjoy the process instead of making it work and I think they did a great job of that,” said head coach Nadalie Walsh. “We had a lot of really strong performances, and sometimes you think you might deserve to be scored a little higher, but we just have to go back and keep working.”

On beam the highest individual Illini scores were 9.875 by Noonan and Takekawa, they tied for first. On floor the highest Illini score was 9.875 by junior Mia Townes as she placed third in the event.

Tri-meets are technically two meets combined so the Illini got a win against Michigan State, bringing their record to 4-2. They are 4-1 on the road and 0-1 at Huff Hall.

This season’s results against these two teams flipped from last year. Last year the Illini beat Ohio State and lost to Michigan State.

Illinois was originally scheduled for a home meet against No. 7 Michigan but COVID issues within the athletic department caused it to be delayed. No word yet on whether it will be rescheduled.

The Illini have two more meets before the Big Five, which is a big event when considering conference title seeding.

Next, the Illini travel to University Park, Pennsylvania for a meet against No. 31 Penn State Feb. 13.