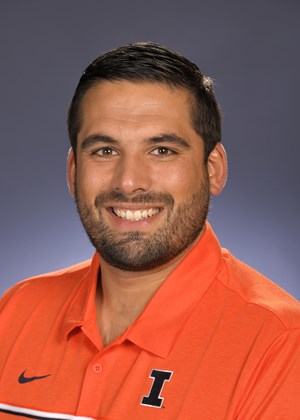 Director of football recruiting Patrick Embleton poses for a professional headshot. Embleton has been on the football team staff for over a decade.

All he wanted to do was provide for his family.

Already the father of two young children, Patrick Embleton’s wife became pregnant with their third child. Living in a smaller Champaign home, Embleton decided it was time to get a bigger house to accommodate his family while staying close to his job: director of personnel for the Illinois football program.

Granted, he made these moves while Lovie Smith was still his boss. While Smith wasn’t creating a Big Ten contender, it seemed likely his regime was here to stay.

Illinois was coming off two straight road victories in November, squeezing by Rutgers and smacking Nebraska. Lovie Smith’s seat — for the moment — cooled.

Usually, when the head coach is relieved of his duties, the rest of the staff is released, and this transition was no different. Every position coach or coordinator, aside from Cory Patterson, is gone.

The newly hired staff has gone through that, too, in the past. Current offensive coordinator Tony Petersen had seven different jobs in the previous 14 seasons. Stability isn’t associated with coaches.

But somehow, Embleton has defied common sense and has been a fixture with the Illinois football program for almost a decade, despite three head coaches being fired since he’s arrived.

“I think everybody in the coaching profession knows you will be hired and fired at some point,” Embleton said. “That’s just the nature of this business. But hard work, that’s what really helps me succeed. It’s what helped me survive the last couple coaching changes.”

Although Embleton isn’t a position coach, he’s part of the staff, as he oversees all on-campus activities of student-athletes in the Illinois football program. Whether it’s acting as a liaison to the NFL, working with academic departments, or coordinating traveling for recruiting, Embleton’s communication skills have played a huge role in helping his athletes develop.

But despite his decade long commitment to a struggling program, his future was dependent on whether Bielema decided to carry over a Smith staff member. Bielema decided whether Embleton would have to relocate his two children and pregnant wife from his newly purchased home.

“Did it cross my mind? Heck yeah,” Embleton admitted. “That stuff worries you, but at the end of the day, you figure it out.”

When Embleton met with Bielema, the personnel director didn’t know what to expect and didn’t plan on anything. He didn’t go into the meeting with the expectation of lobbying for a job. Instead, he provided Bielema a packet for his potential replacement.

“I always put together something I think the next person needs to know,” Embleton said. “Whether it’s in-state relationships, stuff about academics here, just baseline information that somebody walking in needs to know.”

While Bielema and Embleton walked through the packet, the Ohio Wesleyan graduate locked up a spot on Bielema’s staff, securing a position under his fourth Illinois head coach.

While Embleton has had a front-row seat with a rapidly changing sport and Illini coaching changes, little has changed with Illinois’ results — zero winning seasons since 2011.

For Embleton, his intention of joining a college football program was to coach. Before arriving in Illinois, Embleton was the wide receivers coach at his alma mater. His meteoric leap from Division 3 to Division 1 was supposed to just be a brief hiatus from coaching.

But Embleton adapted and grew to love his behind-the-scenes role. He has no desire to return to coaching, as he has found a passion for helping young men develop from high schoolers to college graduates. Now Embleton will try to adapt Illinois’ recruiting efforts under new management.

“We have to stay in constant contact with our high school in the state,” Embleton said. “Now that we have the areas divided up, we’re going to start attacking it by calling every high school coach in the state.”

Tim Beckham, Bill Cubit and Lovie Smith — his previous bosses went a combined 34-72. Beckham was fired for player mistreatment, Cubit was an interim coach and Smith was a straight arrow who failed to energize the program enough.

Bret Bielema is set to change up the status quo that has handcuffed the program that produced Red Grange and Dick Butkus.

“You really get to know the guy with just one conversation,” Embleton said. “He’s a fun, loveable guy to be around, and it’s infectious. When he speaks, you want to sit there and learn.”