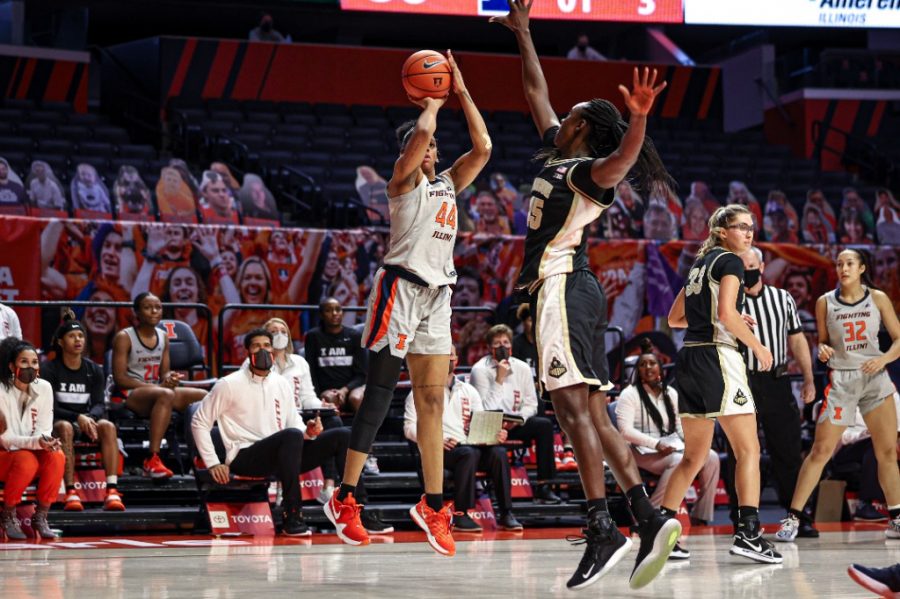 Sophomore forward Kennedi Myles shoots during the game against Purdue on Sunday. The Illini will play against Minnesota tonight in Minneapolis.

After a 10-game losing streak to start the Big Ten season, the Illinois women’s basketball team beat Purdue on Sunday, and now they’re looking to build off it against Minnesota.

Like the Illini, the Golden Gophers have struggled in Big Ten play, going 4-8 in conference play. Minnesota ranks in the bottom half of the conference in both scoring offense and scoring defense, but they have an attack that can frustrate Illinois.

Offensively, Minnesota is led by sophomore guard Jasmine Powell, who is averaging 15 points per game, but their balanced attack is much more concerning for Illinois.

“(Sara) Scalia has really deep range, Powell can be really explosive, as is (Gadiva) Hubbard, so you have to be moving on airtime,” said Illini head coach Nancy Fahey. “When you go man, you have to make sure you can take Powell off the bounce, so that’s where you have to keep your team intact, and, at the same time, keep (Minnesota) off balance.”

The Golden Gophers also like to take threes, averaging nearly 24 attempts per game, though they’re shooting just 32% on those shots as a team.

Minnesota relies mostly on Scalia, Powell and Hubbard to stretch the floor, and the trio has combined for 84 of the team’s 107 made threes. For the Illini to win this game they need to limit the Golden Gophers’ three-point production.

“We need to make them attack off the dribble, knowing that we have to close out tight and not close out short,” said sophomore guard Jada Peebles. “In transition we have to make sure we’re not getting too deep and making sure we’re getting out to the three.”

Minnesota’s real problems occur on the defensive side of the ball. They rank last in the Big Ten in defensive scoring, field goal percentage and three-point percentage. Interior defense has been a struggle for the Golden Gophers despite starting two bigs.

This could be a potential breakout game for Illini redshirt junior center Eva Rubin. At 6-foot-5, Rubin has the size advantage over Minnesota. In the Illini’s last three games, however, Rubin has only scored nine combined points, attempting just eight shots in that stretch. This would be a good time for Rubin to right the ship.

Following the win over the Boilermakers, the Illini are trying to learn and continue the positive momentum they currently have.

“When you lose, there’s constant looking at how you get better,” Fahey said. “It’s really important that when you win you do the same thing. Obviously having the win gives you a boost. We needed it emotionally. We’re people, and we’re trying to build off of that.”

Offensively the Illini still have a way to go. In the win over Purdue, Illinois was held to just 54 points. The Illinois defense led the way, and a late 7-0 run allowed the Illini to be victorious.

A key piece as of late for Illinois has been sophomore guard Jeanae Terry. Over her last four games, Terry is averaging 18.5 points, 11 rebounds, five assists and 2.5 steals per game. Her two-way ability has been essential for Illinois, and her rebounding has helped an Illini team with a depleted frontcourt throughout this season.

Tip-off is at 6 p.m. from Minneapolis, and the Illini will come back home Sunday to face the No. 15 Indiana Hoosiers.