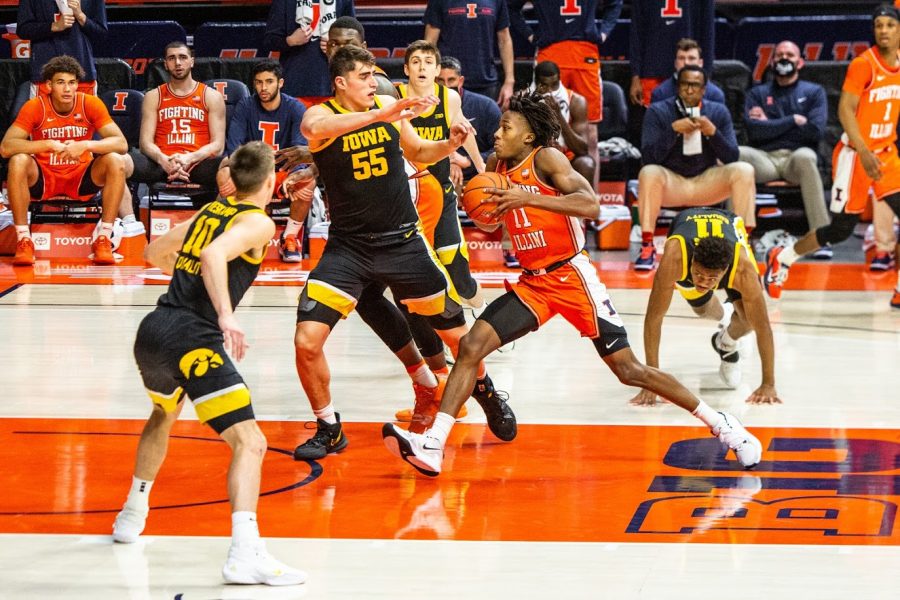 Iowa senior center Luke Garza attempts to defend as junior guard Ayo Dosunmu drives through the lane during the game between Illinois and Iowa on Jan. 29 at State Farm Center. Dosunmu and Garza are the front runners for the Big Ten Player of the Year award.

Like most things nowadays, uncertainty is the name of the game for Big Ten teams. Just over four weeks remain in the regular season until the conference tournament starts on March 10. With program pauses, upsets and rescheduled games in the headlines over the last few weeks for many conference teams, let’s take a look at some of the biggest questions and talking points ahead of the final few weeks of the regular season.

How will the Big Ten determine its regular season winner?

As seen with Ohio State in the college football season, the Big Ten has not set a firm stance with how it will deal with Michigan, a team that will likely not play all of its scheduled games this season. The entire Wolverines athletic program was forced to halt operations after the B.1.1.7 COVID-19 variant detected in several individuals linked to the department, and Michigan’s basketball team has not competed since Jan. 22, postponing five games during that stretch.

It would take a jam-packed schedule for the Wolverines to get all their games in, creating a situation that begs the question: How will the Big Ten decide who the rightful regular-season winner is?

Michigan currently sits at 8-1 in the Big Ten, while Illinois sits 0.5 games back, with a record of 9-3. As things stand, would the Big Ten crown the Wolverines the champions since they have a higher win percentage, or would they go with the Illini due to their larger win total?

It seems inevitable that the decision will be controversial if Michigan doesn’t play all 20 of its conferences, even more so if it doesn’t reschedule its game with Illinois, a matchup that would have major implications on the final standings. Hopefully, the Big Ten comes to a decision soon, or things could get ugly as the regular season comes to a close.

Inconsistency from all the top teams, except Michigan

Everyone knew this would be one of the most unpredictable and nail-biting seasons of all time, and the Big Ten certainly hasn’t disappointed. Any team can seemingly beat any other team on any given night, leading to several upsets, including Maryland taking down Illinois, Wisconsin and Minnesota on the road; Northwestern knocking off Ohio State; and Minnesota triumphing over previously undefeated Michigan by 18 points.

This inconsistency has seen Big Ten teams ranked all across the board in the Associated Press Top 25 poll, with 10 of the 14 conference members in the rankings at some point this season. Michigan, which was ranked No. 25 in the nation after the first week of games, is now third in the country and sits atop the Big Ten standings with just one loss, while Ohio State, which came into the season at No. 23 in the rankings, is now fourth. Michigan State is the biggest shocker, however, as it was ranked fourth in the nation after four weeks of action but is now unranked and sits third to last in the Big Ten.

Michigan has put together several impressive displays this season, including a 23-point win over then-No. 9 Wisconsin and a 25-point victory over then-No. 23 Minnesota. Though the Wolverines have yet to face the Buckeyes, the Illini or the Hawkeyes this season, they look like the real deal, and it isn’t an accident they are currently first in the Big Ten.

Every top program has a few upset losses this season, yet seven Big Ten teams are ranked this week, showing how stacked and unpredictable the conference is. I wouldn’t be surprised if there are at least eight or nine teams representing the Big Ten in the NCAA tournament this year.

After watching Illinois junior Ayo Dosunmu put together a triple-double — 21 points, 12 rebounds and 12 assists — against Wisconsin on Saturday, it’s easy to understand why the Chicago native is considered one of the best players in all of college basketball.

The junior guard is currently averaging 21.2 points, 6.4 rebounds and 5.1 assists per game, all of which are career highs, and he has been named the Big Ten Player of the Week four times this season and Naismith Player of the Week last week.

Iowa senior Luka Garza already has a Big Ten Player of the Year and a Naismith Kareem Abdul-Jabbar Center of the Year Award under his belt, but he is undoubtedly hungry for more. The Washington, D.C., native is averaging 25.5 points, a current career best and the most in the Big Ten, and 8.4 rebounds per game, and he is a shooting threat from all over the court, an unusually impressive feature for a college center. At this point, the Big Ten Player of the Year is between Garza and Dosunmu, so it will be interesting to see how they finish their respective seasons, both personally and with their teams.

Illini sophomore Kofi Cockburn is probably the dark-horse candidate for Big Ten Player of the Year right now. The seven-foot center is averaging 17.2 points and 10.4 rebounds per game, the most in the Big Ten, and has amassed a double-double in 10 of Illinois’ 12 Big Ten games this season. Cockburn is also tied for the most double-doubles in all of college basketball, with 13 through 18 games this year.

The Jamaica native is probably the second-best center in the Big Ten right now, but if he can keep putting together dominant performances with Illinois, Cockburn could edge Garza for the award.

Indiana sophomore Trayce Jackson-Davis is also in the running for the best player in the conference, as he is currently averaging the third-most points and rebounds per game, with 19.9 points and 9.2 rebounds per game. Jackson-Davis has looked like the real deal in the Illini’s two meetings with the Hoosiers this season, but Cockburn has looked like the superior center due to his sheer size and strength. It looks like the Greenwood, Indiana native will miss out on the award this year, but he is certainly one of the best centers in college basketball.