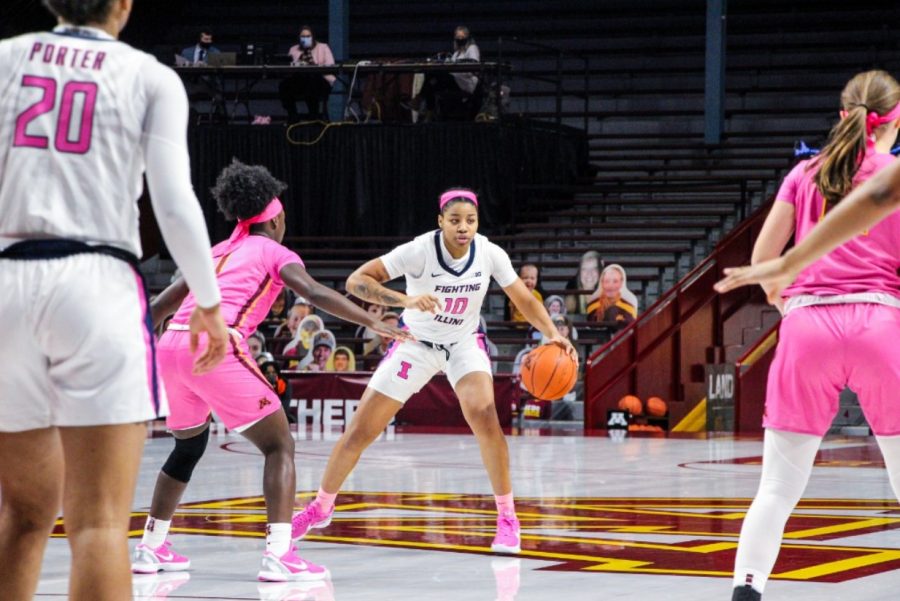 Sophomore Jeanae Terry dribbles during the game against Minnesota on Wednesday. The Illinois women’s basketball team will face Indiana on Sunday.

The Illinois women’s basketball team won their last game at the State Farm Center Sunday. They’ll have a chance to win two home games in a row this Sunday for the first time this season.

The Illini got their first Big Ten win on Feb. 7, upsetting Purdue at State Farm Center. The team was unable to capitalize on the win and go on a winning streak, losing at Minnesota, 83-73, Wednesday.

Indiana comes into the game on a three-game winning streak, most recently blowing out Penn State on Wednesday and defeating Iowa on Feb. 7. The Hoosiers have been among the strongest teams in the Big Ten this year, and they are currently outscoring opponents by an average of 17.5 points per game.

The Hoosiers have been a difficult opponent for the Illini in recent years. The Hoosiers hold a 43-30 edge in the series and have won the last 10 meetings. Illinois last defeated Indiana on Feb. 23, 2013.

For the Illini, slowing Holmes down is going to be crucial to an upset Sunday.

“When she can control that lower box area, she’s really, really effective,” said head coach Nancy Fahey. “I think it’s key that (we) keep her out of that area.”

Though Illinois hasn’t defeated Indiana in eight years, the team is eager to start a winning streak, both against Indiana and at the State Farm Center.

“I think the first game, (we) came out, and we kind of came out sluggish,” Terry said. “And then we tried to get our confidence back throughout the game, and so I feel like we start with that, we’ll be fine.”

The game tips off at 2 p.m. Sunday, and fans can tune in on Big Ten Network+.