Illinois avoids disastrous loss to Nebraska thanks to Dosunmu’s heroics 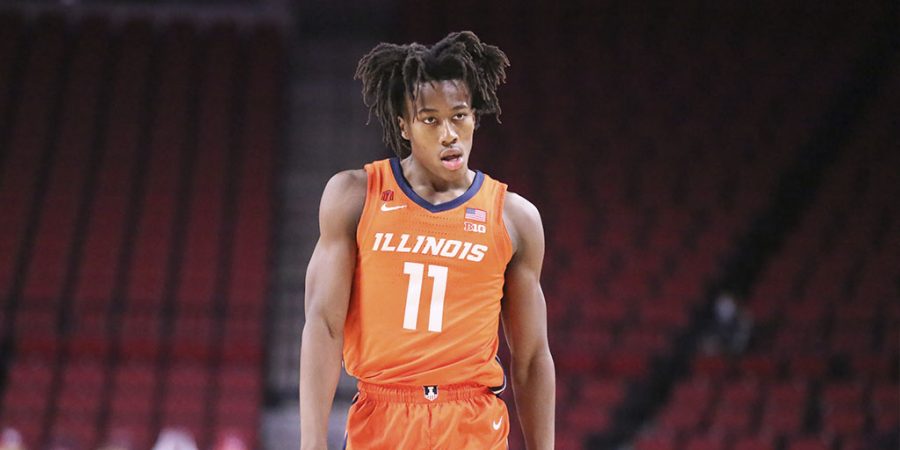 Ayo Dosunmu takes the floor in Illinois’ win against Nebraska on Friday night.

Going into its Friday night matchup at Nebraska, things were looking up for Illinois. The Illini were on a four-game winning streak, a projected No. 2 seed in the NCAA tournament, and a top-four net ranking. Another easy win was expected in Lincoln against a 4-11 team.

But nothing was easy about Friday night. Illinois had to crawl its way back at the end. Ayo Dosunmu had to have another All-American type performance, scoring the last five points of regulation to send the game to overtime. He then scored the first five points of the extra period to bury Nebraska and allow Illinois to escape with a 77-72 win.

“I drew a big T on the whiteboard,” Underwood said. “I put a W in one column and an L in the other. And then I put a mark under the W. That’s what tonight was. We escaped in an ugly fashion.”

After a six-day layoff, the Illini looked rusty to start. They had two turnovers and missed their first four shots by the under-16 media timeout as the Huskers took a 9-0 lead. The Illini would rally back behind threes from Ayo Dosunmu, Trent Frazier, and Adam Miller to cut the deficit to 11-9. The Huskers continued to make shots. A Dosunmu turnover led to a Derrick Walker and-one and the Nebraska lead stretched to 30-22. Illinois rallied to score seven straight points and make it a closer contest. A Frazier jumper rimmed out and the Cornhuskers had their first halftime lead in Big Ten play, 34-33. The Illini were plagued by nine first-half turnovers.

Illinois had struggled in first halves in previous games, but they typically pulled ahead against lesser opponents. The teams traded buckets before a 7-0 Nebraska mini-run put them up 52-46. Behind Frazier, Dosunmu and Cockburn, the Illini rallied to take a 56-52 lead and it appeared they would pull ahead. But Nebraska continued to scrap, going on a 12-2 run. A Lat Mayen three put the Cornhuskers up 64-58 with 2:55 to go. But then, Dosunmu took over. He got to the line, making both free throws, converted a transition lay-up, and made two more free throws to tie the game at 64.

“Coach called a timeout, we were down five, I’m like ‘alright, it’s time to lock in.” Dosunmu said. “‘Trust in yourself. Believe your instincts. You got this. All the work you put in. Let’s try to get a W.’”

Nebraska countered with a Dalano Banton layup and Illinois had the ball down two with 36 seconds remaining. Predictably, the ball was in Dosunmu’s hands, but it didn’t matter if Nebraska saw it coming. He drove right and finished a layup to tie the game. The Illini got a stop and the game was headed to overtime.

Dosunmu started the overtime the way he ended regulation: getting buckets. He got to the rim again and hit a pull-up three, and the Illini didn’t look back.

Despite the win, the game raised some red flags for Illinois. The Cornhuskers outrebounded the Illini and grabbed 15 offensive rebounds, which Underwood attributed to pursuing the ball better. They missed eight free throws. All players outside of Dosunmu and Cockburn scored just 25 points and only five players made baskets. These will be areas Illinois needs to clean up on, but at the end of the day, the Illini were happy to walk out of Lincoln with a victory.

“At the end of the day, that column says win,” Dosunmu said. “It’s no moral victories or almost wins. It just says win, so I’m grateful to get this win.”