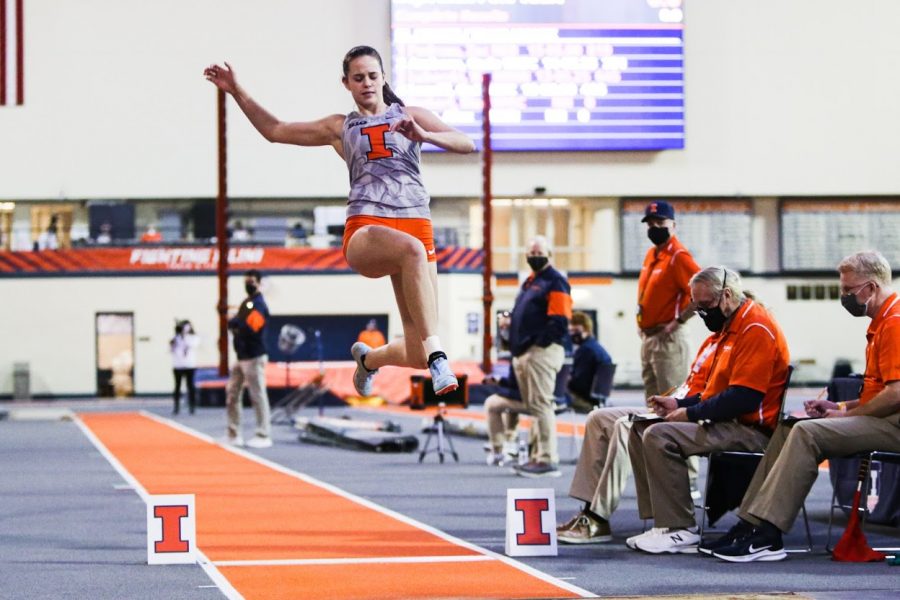 Junior Lucy Lux-Rulon competes in the long jump event during the Illini B1G Multi-Meet on Jan. 30. The Illinois track team finished the regular season on Saturday.

While college athletics programs all across the country have been consistently delayed due to coronavirus-related issues, the Illinois track program has steered clear of any delays and have finished up the regular season Saturday in Iowa City after six straight weeks of competition.

“I think tremendous credit goes to our University, who have set up a policy that we are following and the support we have,” head coach Mike Turk said. “We’ve gone above and behind the COVID test, but at the same time there is no perfect shield.”

Over the course of two days, the Illini sent out a full roster, having athletes compete in virtually every major event. While many Illini set personal records, familiar faces once again carried the torch for the orange and blue.

Although the Michigan transfer failed to live up to his own records, his off day was still enough to hold off his Big Ten rivals.

Senior Manning Platter finished with a weight throw of 70 feet and 10.5 inches, which was almost a full meter above second place finisher Tyler Lienau of Iowa. Platter has continued to be one of the most consistent winners on the roster, and Platter will be a favorite to win the Big Ten title once the championships come in a couple of weeks.

“He’s undefeated and No.5  in the country. It’s indisputable (he was the MVP),” Turk said. “It’s been a blessing in our program, not only because of his athletic skills but because of his presence that has elevated our program. He’s had a very positive impact. He’s performing at such a high level. He’s been a great fit for us.”

Sophomore Olivia Howell, who competed in multiple events, excelled in individuals and with the team, anchoring the Illini to two additional first-place victories.

In her solo event, Howell excelled in the mile, finishing with a time of 4:40.85, easily securing her first place on the day as well as her recording a personal record. But her performance wasn’t just a dime-a-dozen occurrence — it placed her in the Illini record book with the third-fastest time in school history.

Her success, though, wasn’t limited to just herself, as her performance in the distance medley premier helped secure the Illini first place over the Gophers.

Breaking the Iowa facility record by 10 seconds, the Illini’s time of 11:23.93 held off a strong performance from the Gophers, who finished 12 seconds behind.

Howell, who anchored the event, outperformed her Gopher counterpart by nine seconds, which put the event out of reach for Minnesota.

“Her performance was very impressive,” Turk said. “Everybody sees her PR in the mile. She showed outstanding ability. What you may not notice, she was a big part of our 4 by 4, and it’s quite a tool she can use.”

While the Illini only finished with three first-place finishes, Turk has liked how his athletes performed over the past six weeks.

“We have good energy and good aggressiveness,” Turk said. “I really like where we are and the improvements we are making.”

Next up for the Illini is a two-week break, its first since the season opener, before the Big Ten championship.