Player grades: Dosunmu puts team on his back late in overtime win over last-place Nebraska 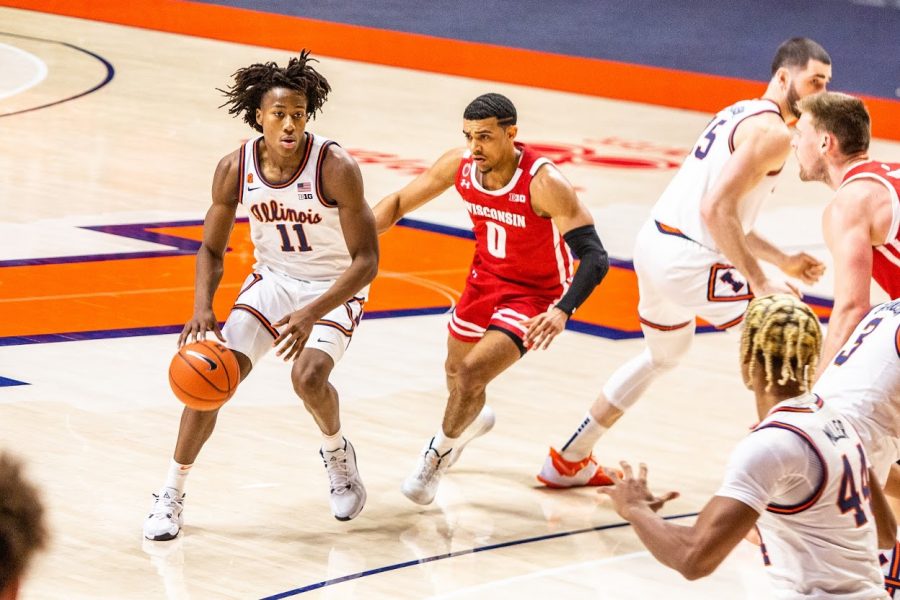 On Thursday, the Illini were supposed to be in Ann Arbor for one of their biggest games of the season: a showdown with the No. 3 Michigan Wolverines. Instead, that game got postponed for unclear reasons, and Illinois was forced to play one of its postponed games from earlier in the season and traveled to Lincoln on Friday night to face a Nebraska team that had yet to win a Big Ten game this season.

It seemed like it should’ve been a cakewalk for the Illini, but it was anything but easy for the sixth-ranked team in the country. Illinois needed a five-minute overtime period for the second time in three games to take down an energetic Nebraska team, eventually winning 77-72 for the team’s fifth straight win.

Illini fans should be thankful Thursday’s game got postponed, as the Illini looked completely out of their element for most of the game, playing sloppily on both ends of the court. If not for the late-game heroics from junior Ayo Dosunmu, the Illini might’ve been on the wrong end of one of the most shocking wins of this college basketball season.

It certainly won’t be a night to remember for Brad Underwood’s squad, but let’s take a look at seven Illini performers from Friday night’s ugly win.

Note: Despite starting the game, Jacob Grandison did not play enough for me to fairly assess his performance. Giorgi Bezhanishvili also will be omitted from these grades, as he played only six minutes. Neither player would get high marks, though, so it shouldn’t matter too much.

It’s rare for Cockburn to have an off night, and Friday was no different. The sophomore center finished with 21 points and 13 rebounds, which is his 11th double-double through 13 Big Ten games this season.

Early in the game, it seemed like the Cornhuskers figured out how to contain the Illini big man, often putting two defenders on him in the paint to eliminate the feed pass. It didn’t last long for Cockburn to find his groove, however, as the Jamaica native put up video game-like numbers once again, using his size and strength to brush off weaker Nebraska defenders.

On the defensive end, though, Cockburn didn’t look very comfortable, and Nebraska took advantage of that, converting several easy layups. He also failed to get his hands on missed Cornhusker shot attempts, which almost came back to haunt the Illini late in the game.

In overtime, Cockburn found himself at the free throw line often, though he made just two of his six attempts. Thankfully, Dosunmu bailed him out, but Cockburn needs to get his free throw situation sorted out. A 57.6% free throw percentage isn’t good enough for someone who gets to the free throw line as often as Cockburn does, and that free throw issue almost cost the Illini on Friday night.

Coming off his first career triple-double on Saturday against Wisconsin, Dosunmu put the team on his back once again on Friday night. The Chicago native scored the Illini’s final 10 points in regulation before scoring seven of the team’s 11 points in overtime, finishing with 31 points, a career-high for him in a Big Ten game, six assists and four steals.

It looked like it was going to be a stunning, disastrous loss for No. 6 Illinois, just days after taking down Wisconsin at home in one of the team’s best performances of the season. Early tonight, Dosunmu looked off his game, as he repeatedly looked slow and tired and turned the ball over carelessly multiple times.

But as we’ve seen on countless occasions in Dosunmu’s career, he is one of the best closers in college basketball and rarely misses late in close games. Friday night was no different, as Dosunmu single-handedly carried the Illini, both offensively and defensively, to avoid the catastrophic upset, adding another jaw-dropping performance to his already impressive resume in Champaign. Josh Whitman should already be working on getting Dosunmu’s name in the rafters at State Farm Center.

Following a slow start to the season, Frazier has found his groove lately, both on offense and defense. Friday was no different, as the senior guard went for 10 points in the win.

The Florida native looked solid once again on the offensive end, and his veteran presence helped calm the nerves of younger teammates with the game on the line. Though he had a good shooting performance, Frazier’s defensive showing was where he truly stood out.

Frazier looked confident and reliable on defense, playing tight defense throughout the game which forced the Cornhuskers into tough contested shots. One play in particular that illustrates how vital Frazier is to this Illini team was when he forced a steal and took the ball coast to coast for an easy layup, showcasing his abilities on both ends of the court. The senior guard’s energetic presence on defense is essential to this Illini team’s success going forward, something that proved pivotal for Brad Underwood’s squad on Friday.

After a rough start to the season offensively, Miller seems to have found his shooting touch over the last few games. That was no different on Friday night, as the Chicago native finished with 10 points and seven rebounds, making his presence felt on offense and defense.

Late in the game, though, Miller stepped up defensively, forcing Nebraska to take tough shots and run down the clock with the game on the line. This intensity on the defensive end is crucial for this team to win games, and the Illini easily could’ve taken the loss if it hadn’t been for the freshman’s efforts on defense.

Miller still has to work on his maturity in terms of his shot selection, but he will certainly be a huge asset for the Illini in the postseason and beyond during his time in Champaign.

Saturday’s game with Wisconsin was the worst of Curbelo’s short Illini career. The Puerto Rico native easily could’ve come out tonight with that performance still on his mind and played poorly, but it looked like he put that game behind him. Though he didn’t score any points, the freshman racked up four assists in the win.

With the Illini struggling to get shots to fall early in the first half, Curbelo was a spark off the bench, setting up two wide-open three-pointers to get the offense going. His energy and selfless passing are what make him such a promising prospect for the Illini, and those qualities were on full display on Friday night.

Though he helped jumpstart a static Illinois offense, his impact wore off as the game went on, and turnover issues plagued the freshman once again. Once Curbelo gains some maturity, especially in terms of his overly ambitious drives to the basket, he has the potential to become an Illini great.

Wow. I did not see this performance coming.

After seeing limited minutes over Illinois’ last few games, Hawkins got 10 minutes of playing time on Friday, and he was put in to get the offense going. He certainly made his impact known, getting a circus shot two-pointer to fall before drilling a three, which is only his third triple since joining the Illini this season.

Hawkins isn’t going to be a game changer for the Illini this season, but he can certainly be a spark off the bench when the team is struggling to get shots to fall. Though he seemed to get a bit overly confident after scoring five quick points, the California native can provide depth and energy off the bench whenever he’s needed.

It’s hard to say much about Williams’ performances these days. On Friday night, however, the Peoria native was a liability on defense, consistently getting caught out of position and flat-footed which led to Cornhusker baskets. His inability to grab defensive rebounds was also a major cause for concern, including a missed rebound that led to a wide-open Nebraska three to widen Illinois’ deficit to six with just under three minutes left.

On the offensive end, Williams didn’t do much, as he didn’t take any shots, a surprising phenomenon for one of the most successful three-point shooters in the country. The Illini need the senior guard to get back into his rhythm from beyond the arc moving forward, especially when the offense struggles to get going.