Illinois comes up short against Iowa in last-ever dual meet 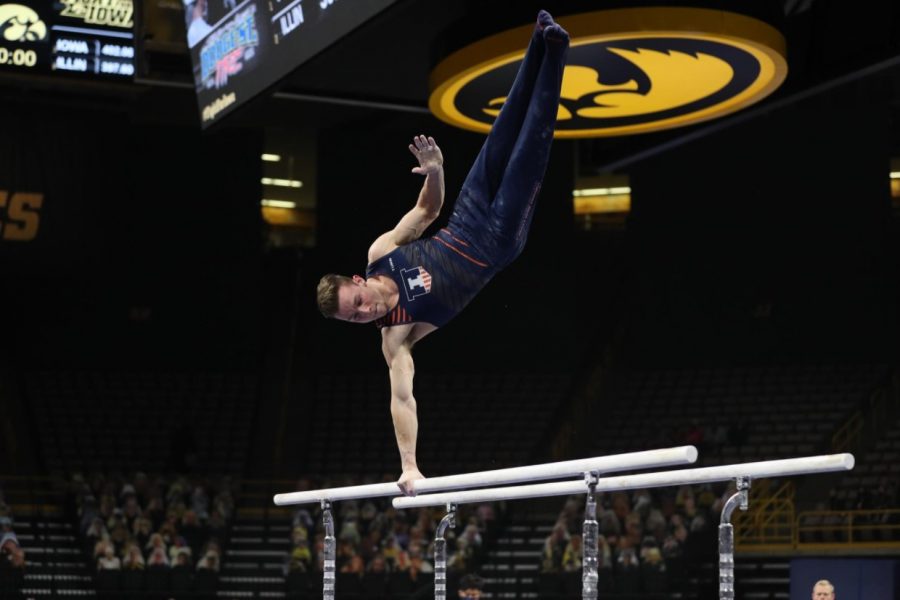 Junior Michael Fletcher performs his parallel bars routine during the meet against Iowa on Saturday. Illinois fell to Iowa 402 to 400.5.

The No. 4 Illinois men’s gymnastics team traveled to Iowa City, Iowa, over the weekend to face the Iowa Hawkeyes for the 250th time in their all-time series. This meet, however, will be remembered more for being the final regular season meet in which the Illini competed against the Hawkeyes.

Even if Iowa’s team was returning next season, Illinois was hoping to rebound from a narrow loss to Penn State two weeks ago. But a good performance by the Hawkeyes and errors across the board for the Illini gave the Hawkeyes a 402.000-400.500 win.

After starting its season 2-0, Illinois has fallen to 2-2 overall and 1-2 in Big Ten competition.

“We got outperformed, straight up,” said Illinois head coach Justin Spring. “Iowa came and had a very good meet. They hit, they stuck a lot of landings.”

The Hawkeyes outscored the Illini in three out of six events and tied the Illini in a fourth. The Illini did outscore the Hawkeyes on still rings and parallel bars but not by a wide enough margin to pull off the win. Illinois gymnasts claimed three event titles: Connor McCool on floor exercise, his first of the season; Danny Graham on still rings, who has won that event in every meet the Illini have competed in this season; and Ian Skirkey on pommel horse, who split the title with Iowa’s Bennet Huang.

“That’s just not acceptable,” Spring said. “Those are huge misses. That’s like seven points alone on landings. That was a big one for us this meet.”

While most landings required a few additional steps for Illinois’ gymnasts to balance themselves, a few couldn’t stay on their feet; those falls deducted a full point from their routines. The Illini had several falls on apparatuses where they’re prone for them, including pommel horse and high bar, but they also had a few falls on apparatuses where they’re pretty solid, like floor exercise and vault.

“They were pretty uncharacteristic,” said all-arounder Michael Fletcher, who had one fall of his own on vault. “We never have any troubles on vault, but we had two falls, which is really unfortunate, and we didn’t have as clean of a floor as we normally have. That accounted for a good amount of points (that we lost). It was a pretty big reason why we didn’t walk away with the win.”

The Illini were also dealing with injuries going into this meet, which also contributed to point loss. Junior Léo Valentin and freshman Will Hauke suffered season-ending injuries the week prior to the meet. Right before the meet started, Clay Mason Stephens, slated to compete in three events, rolled his ankle in warmups and was removed from the lineup. Stephens, capable of scoring a 14.000 or higher on high bar, was replaced by Dylan Kolak, who scored 12.450. Spring likened this to a starting quarterback being replaced by his less-than-ideal backup.

While the Illini were focused on the competition itself and were aiming for the win, Spring couldn’t ignore the fact that this was the last meet of its kind for the Illinois-Iowa series, and he addressed it in the pre-meet huddle.

“He said, ‘Don’t take things for granted because things can get taken away very easily,’” Fletcher said. “We’re very fortunate to still have a (men’s gymnastics) program at Illinois, so I think we have to be grateful that we’re here doing what we love to do and not getting cut. I feel for those guys (on Iowa’s team). They’re all really good guys, and I wish them the best in the future.”