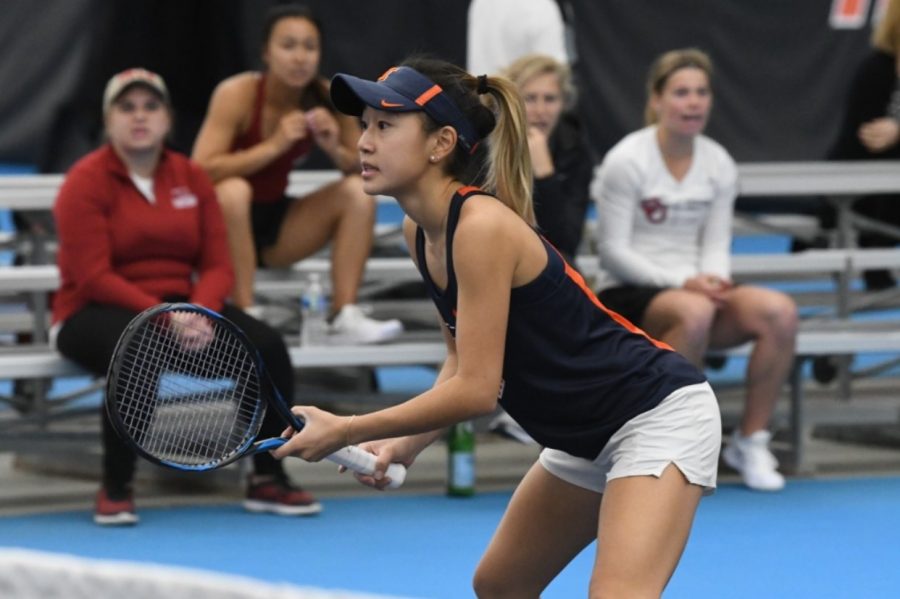 Senior Emilee Duong competes during the meet against Oklahoma on March 3, 2020. The Illini fell to Nebraska on Sunday by a score of 5-2.

After over 11 months of waiting, the Illinois women’s tennis team finally took part in competitive matches this weekend, though they ultimately fell to Iowa on Friday and Nebraska on Sunday.

The Illini opened up the weekend in Iowa City, Iowa, where they took on the Iowa Hawkeyes to open up their Big Ten campaign on Friday. This was the first regular season meeting between the two conference rivals since 2018.

Head coach Evan Clark opted to go with doubles pairings of seniors Emilee Duong and Asuka Kawai; senior Sasha Belaya and sophomore Josie Frazier; and sophomore Ashley Yeah and freshman Kate Duong, the same partnerships Illinois used in their final preseason meet with Purdue. The Illini struggled in doubles play, with Duong/Kawai and Belaya/Frazier both falling 6-1 to give the Hawkeyes the doubles point.

Singles play was a bit more favorable for the Illini, as Kate Duong and Frazier both picked up their first regular-season singles wins of the year, but three singles wins for the Hawkeyes gave them the 4-2 win.

Though the Illini weren’t able to get the team victory, Kate Duong’s win was her first competitive singles victory, one of the few bright spots from an otherwise tough start to the season.

The team then traveled to Lincoln to take on a Nebraska team that was coming off a road loss to No. 8 Northwestern. The meet was also the first between the two teams in Lincoln since 2017.

After losing the doubles point to Iowa on Friday, Clark decided to change things up against Nebraska, opting to go with Kawai/Frazier and Emilee Duong/Belaya while keeping Yeah and Kate Duong together. The move ultimately proved unsuccessful, as Emilee Duong and Belaya fell in their match, 6-0, while Kawai and Frazier lost, 6-2.

Despite losing the doubles point for the second consecutive meet, the Illini were able to pick up a doubles victory for the first time in 2021, as Yeah and Kate Duong won their match, 6-3.

In singles play, Kate Duong and Kawai each picked up wins, though the Illini fell in the other four matches, giving the Cornhuskers a 5-2 victory.

The Illini have a six-day break before their next meet, as their next competition will be a road test against the Northwestern Wildcats on Feb. 21. The meet is scheduled to begin at 3 p.m. central time.