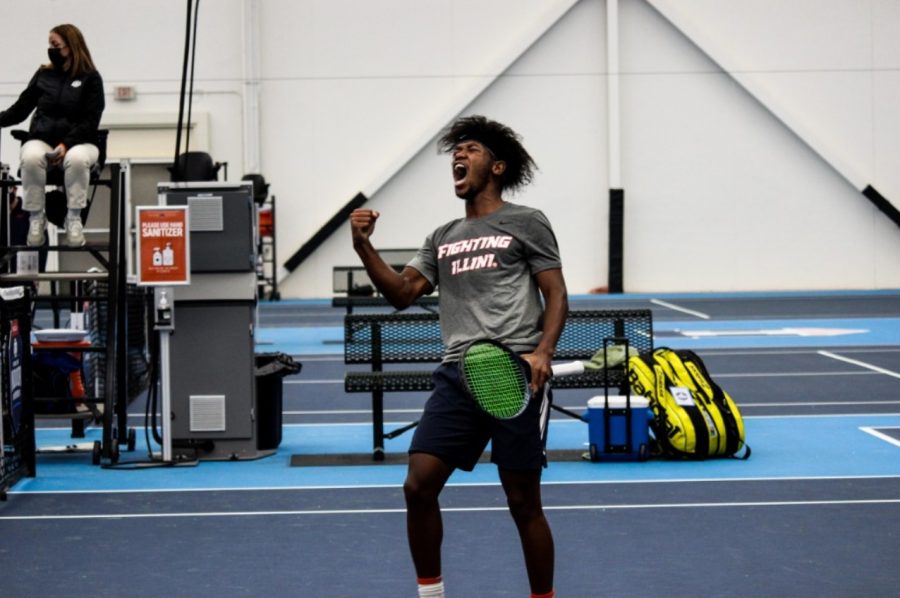 Redshirt sophomore Siphosothando Montsi celebrates after scoring a point during the match against Virginia on Sunday.

Talk about starting the season off with a bang.

After months of inactivity, the Illini opened their season with a dominant 6-1 win over the Wisconsin Badgers on Tuesday. But with just one dual meet under their belt, the Illini sent shock waves through the college tennis world this weekend in the Intercollegiate Tennis Association National Team Indoor Championships, finishing in third place among eight teams.

The tournament featured Illinois, which hosted the tournament at Atkins Tennis Center in Urbana and entered the weekend unranked, and seven ranked programs: No. 1 Southern California, No. 2 North Carolina, No. 3 Texas Christian, No. 4 Baylor, No. 5 Texas, No. 7 Virginia and No. 10 Tennessee.

Few people would have expected the Illini to pose any challenge to the top-ranked Trojans, who also boast the highest-ranked singles player, senior Daniel Cukierman, and the best doubles pair in the country, Cukierman and redshirt senior Riley Smith. Yet, Illinois proved all the doubters wrong.

In doubles play, redshirt freshman Alex Bancila and senior Aleks Kovacevic got an early win for the Illini, winning their match, 6-4. Redshirt sophomore Siphosothando Montsi and junior Kweisi Kenyatte would clinch the doubles point for Illinois, taking down Cukierman and Smith, 7-5, to give the team a 1-0 lead going into singles matches.

Kenyatte kept the momentum in Illinois’ favor in singles play, winning his match in straight sets, before Montsi got the job done in his match to give the Illini a 3-0 lead, just one point from sealing the upset.

The Trojans weren’t going down without a fight, however, as Illini freshman Hunter Heck fell in his match to cut the score to 3-1. It was too little, too late for top-ranked USC, as senior Zeke Clark ultimately sealed the unexpected win for Illinois with a win in straight sets. The win was also the Illini’s first victory over a top-ranked program since 2006.

DOWN GOES USC!@ZekeClark secures the win for the #Illini! pic.twitter.com/woY3NLRkvu

Coming into Saturday’s semifinal showdown with No. 4 Baylor, Illinois had momentum on its side, looking to take down a top-five opponent for the second consecutive day. The Bears had other ideas, however, cruising to a dominant 4-0 victory.

The Illini struggled from the start, losing the doubles point due to losses in two of the three doubles matches. Singles play was also a challenge for the unranked Illini, as Heck, Kenyatte and redshirt junior Alex Brown all fell in their respective matches to seal the team’s fate.

Despite losing, Illinois still had the chance to finish the weekend on a high note, and they faced No. 7 Virginia in the third-place meet on Sunday. After upsetting the No. 3 Texas Christian Horned Frogs in the opening round, the Cavaliers lost to the No. 2 North Carolina Tar Heels in the semifinals, setting up a meeting with the Illini in the consolation bracket.

For the second consecutive meet, the Illini struggled in doubles play, leading to a 1-0 deficit prior to singles matches. Unfazed, unranked Illinois fought back and ultimately completed its second upset of the weekend.

Bancila, Brown and Heck all picked up singles victories, meaning Clark’s match would decide the meet.

Following an impressive showing against ranked opposition this weekend, Illinois will welcome Penn State on Friday to open the Big Ten competition. The meet will start at 6 p.m. central time.