Ahead of rematch with Northwestern, No. 5 Illinois learns how deep Big Ten really is 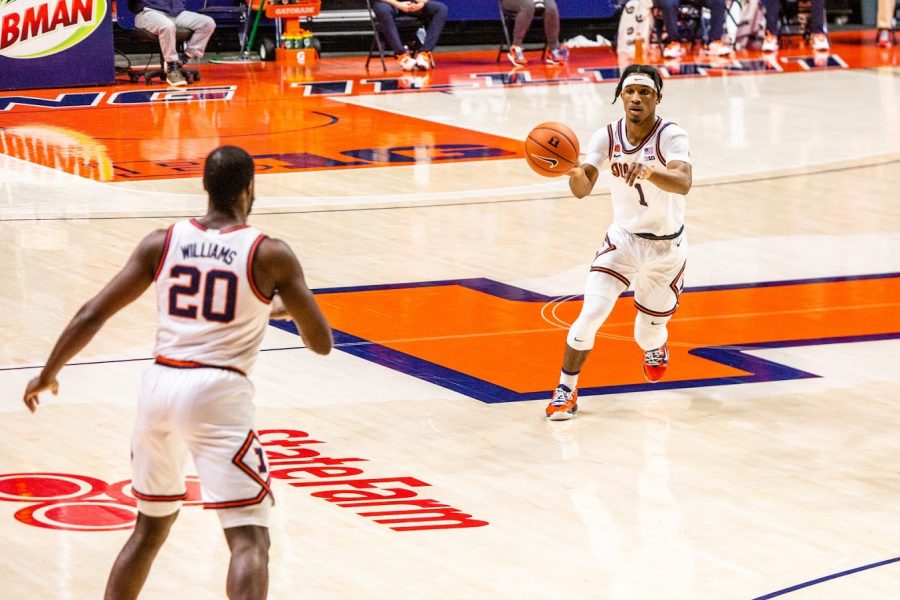 Senior Trent Frazier passes to senior Da’Monte Williams during the game against Wisconsin on Feb. 6. The Illinois basketball team will face off against Northwestern tonight.

Going into Friday night’s matchup against Nebraska, Illinois was expecting a relatively easy win. The Illini were trending in the right direction after winning four straight games.

The Cornhuskers were trending in the opposite direction, losing nine straight games, but that didn’t matter once the game started. The Huskers jumped out to a 9-0 lead, led at halftime and led by six with under four minutes to play. The Illini needed a heroic effort from Ayo Dosunmu to prevent the biggest upset of not only the Big Ten season, but the entire college basketball season.

To some, that close game may have come as a surprise. But to Brad Underwood, it’s just the nature of the Big Ten. This year’s Big Ten recently overtook the 2017 Big 12 teams as the second-best league ever, per KenPom, trailing only the 2004 ACC squads.

Nebraska would turn around and beat Penn State on Sunday, completing the Big Ten circle of transitive victories.

Congrats to Nebraska, and welcome to the circle! Everyone's a Big Ten transitive champion! pic.twitter.com/tUbsNfztR5

Illinois will face another lesser Big Ten opponent in Northwestern on Tuesday. This time, Illinois will know what to expect. In the first matchup, which took place in Evanston, the Wildcats appeared like they were going to pull off the upset, leading the Illini, 43-28, at halftime.

Underwood’s group woke up and played their most dominant half of the season, slaughtering Northwestern by 40 points to win comfortably. Things have not gone better since then, as Northwestern has lost eight straight since the Illinois game, making it 11 straight defeats in total.

As Underwood mentioned, there are no guaranteed wins in this league, and not all of the Wildcats’ losses have been bad. Just last week, they took Indiana to double overtime before losing by three. They managed to hang around at Purdue, only losing by five points, and they had the ball with a chance to tie in an 81-78 loss at Penn State.

Chris Collins’ lineups look a little different since the last time these two teams played. The Wildcats are playing bigger as of late, moving 6-foot 10-inch sophomore Ryan Young into the starting lineup in place of 6-foot 2-inch Boo Buie. This will help combat Illinois’ size, which killed Northwestern in the first meeting. Rebounding will also be an emphasis for the Illini, who were outboarded by the Cornhuskers on Friday.

“We’ve got to finish plays with a rebound,” Underwood said. “I thought we stood around. … We’ve gotta get more from everybody in that area. We’re elite when we rebound because we can run, and our guards rebound. We’ve gotta get Trent getting back in and getting rebounds.”

The game is scheduled for 8 p.m. Central Time on Tuesday night and can be watched on the Big Ten Network.