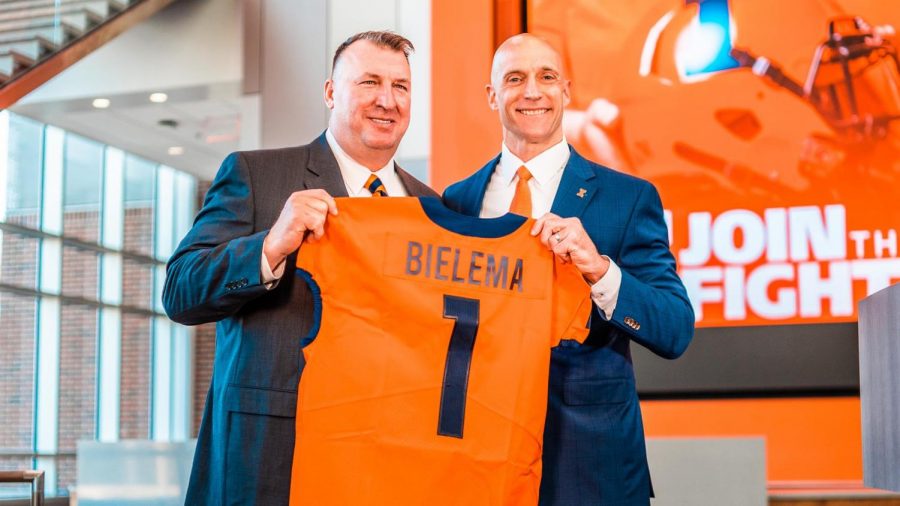 The biggest factor that determines whether a budding program is a sleeping giant: a fertile recruiting base.

Illinois basketball has always garnered more respect than its football counterpart over the past 30 years due to its ability to recruit the state better. The 1980s era of Illini basketball were dominated by Lou Henson and Jimmy Collins’ abilities to build a diverse coalition of homegrown talent.

They were able to pick off athletes from Chicago powerhouse Simeon, Chicago suburbs Aurora and Matteson and deep south Carbondale. The statewide roster led to arguably Illinois’ most talented, successful season — leading to a 1989 Final Four appearance.

Illinois has since struggled to consistently live up to those expectations of recruiting Illinois’ best high school talent, though there has been an awakening since the arrival of Morgan Park graduates Ayo Dosunmu and Adam Miller.

While Illinois basketball has found success in recruiting, parlaying it into a strong foundation for the future, the football team hasn’t had the same good fortune. If a program’s own in-state talent doesn’t respect you, other states probably won’t either. Bielema has a plan for his program to reignite past struggles defending their own turf.

After billing up a new, innovative plan to recruit the state, Bielema and the program have revealed each Illinois recruiting territory the 10 coaches on the staff are responsible for, signaling a direct response to one of the Lovie Smith tenure’s biggest flaws. At the same time, Bielema plans to continue Smith’s success with bringing in graduate transfers.

“To be able to build relationships, that’s why we divided up the state into 10 different segments,” Bielema said. “Our coaches will begin to contact these (high school) coaches now and just say, ‘Hey, is there anybody that’s popping up?’ Sometimes, even those coaches won’t, even though they have a Division I prospect right in front of their face.”

Illinois’ high school football talent has never been able to compete with the likes of Ohio, Georgia, Texas or even Pennsylvania. Compared to the Lone Star State or the Sunshine State, Illinois produces a fraction of four stars or five stars.

Despite having less high-end caliber high school athletes, the state isn’t completely bare of talent. The state produced several four-star players this past recruiting class, and Minnesota and Iowa picked apart the state even though Illinois employed a former Chicago Bears coach.

If a program can’t convince top talent from its state to come to its school, it’s unlikely four stars from neighboring states will come, too.

To put it into context, Wisconsin high school football is not California. However, Wisconsin is still able to keep its best players at home, which has helped Wisconsin transition from a middling program to the most consistent one in the conference, aside from Ohio State.

Bielema, who was the former head football coach at Wisconsin, understands the path to success will need to have a touch — or a major part — come from high schools in Illinois.

“In the state, we have made several outreaches early on in the first two weeks, and that’s to build and grow,” Bielema said. “We will definitely make a thorough evaluation of every program in the state that’s playing football.”

With each coach — even coordinators — having a slice of the pie, Illinois will have a full, 360-degree scope on the state’s high school talent.

Offensive line coach Bart Miller will lead the attack in the Chicagoland suburbs, with a focus on Naperville and Aurora, which has slipped in recent years.

Offensive coordinator Tony Petersen will lead two different regions in Illinois, with him having oversight in the Quad region near Iowa and Wisconsin and the Champaign area.

Defensive coordinator Ryan Walters will oversee the Peoria and Bloomington region, though he doesn’t have immediate connections to the cities.

But while recruiting the state of Illinois needs to improve to create a consistent bowl contender, the Illini still need to have a national recruiting presence. While the Illini may not be able to pluck five-stars from Texas, there’s one avenue Smith proved was successful: the transfer portal.

Illinois’ most recent bowl team was built by the portal with Brandon Peters, Josh Imatorbhebhe and Milo Eifler transferring from blue blood programs to Illinois, which gave them the opportunity to receive playing time while Illinois acquired more talent.

Though Lovie Smith was famous for the practice, one could argue Bielema was a pioneer with the portal. In fact, Bielema brought in both Russell Wilson and J.J. Watt from other schools, which helped lead the Badgers to back-to-back Rose Bowl appearances in 2011 and 2012.

Just a few months into his tenure, Bielema has acquired transfers from across the nation, including North Carolina State linebacker Calvin Hart and East Carolina running back Chase Hayden.

In Bielema’s view, transfers who come from a flashier program to Illinois will be seasoned athletes who know the ropes better than high schoolers and are game ready by day one.

“This whole graduate transfer is something I’ve been intrigued with for a long time,” Bielema said. “Graduate transfers make educational and business decisions. They’re going to make decisions on a smaller window. They’ve already seen the glitz and glamour; now, they want the meat and potatoes.”