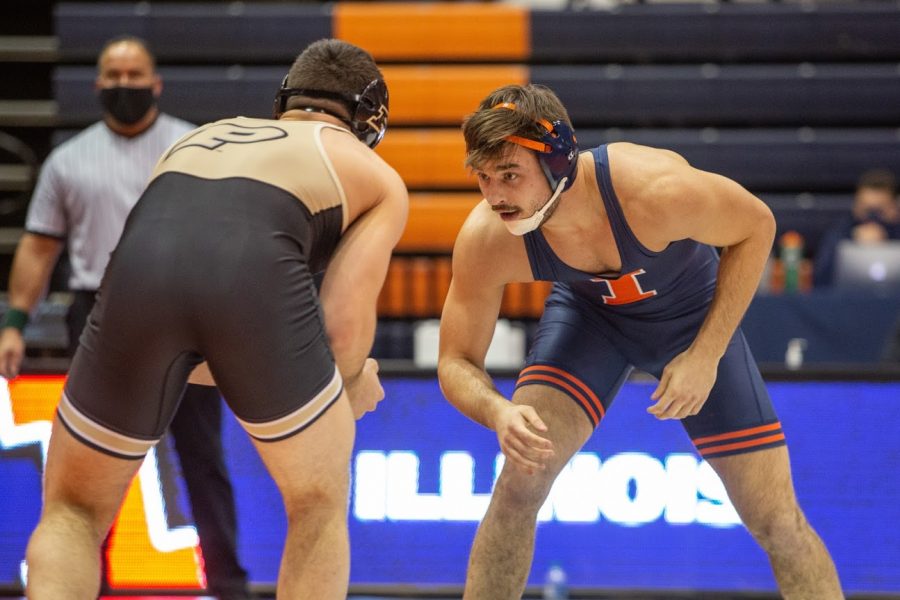 Illini wrestler Matt Wroblewski begins a match against Purdue on Jan. 24 at Huff Hall. Wroblewski has taken advantage of COVID-19 by working on his strength as the playoffs approach.

It’s no secret that the Illini wrestling team is currently one of the best in the country. They are 5-2 and have numerous athletes on the team who have shined all season. With the Big Ten Championships right around the corner, Illinois will try and secure a title for the first time since 2005.

A big part of the Illini’s success has been their intelligence off the mats. Redshirt junior Matt Wroblewski believes not getting shut down due to COVID-19 has had a great impact on the team.

“We gotta keep being smart,” Wroblewski said. “Our biggest thing was that we didn’t get shut down this season. You see these big programs getting shut down for two weeks, whether it was in December or now, but we’ve done a really good job staying disciplined.”

Wroblewski is proud of the way everyone has been competing. He knows people did not expect them to be this good at the beginning of the season.

After a disappointing end to last season, Wroblewski made it his goal to improve. He took full advantage of the COVID-19 situation and worked hard.

“I think I made a big jump from last year to this year,” Wroblewski said. “I took advantage of the COVID situation and made the best out of what I had. I didn’t have the best season last year, and it left a little sick feeling in my stomach that I didn’t like. I worked really hard in quarantine, and it’s finally starting to translate.”

Though it wasn’t easy to practice during quarantine, Wroblewski found ways to get better during the tough times.

“With everything shut down, it was a big challenge,” Wroblewski said. “It started off with running, jumping rope and biking. I did pull-ups and push-ups in my basement. One of the biggest problems last year was my strength, so staying consistent with lifting and working out was the biggest thing for me.”

The Big Ten Championships are only three weeks away. Wroblewski and the Illini know they have to go out there and get the job done to move on.

“We have to just go out there and win,” Wroblewski said. “It’s the Big Ten Tournament. Anything can happen. Like you see in March Madness basketball, teams get upset all the time when the pressure is on. There are people who have decent regular seasons but have a breakout national tournament. We’ll see what happens.”

The No. 11 Illini will face the No. 8 Nebraska Cornhuskers on Sunday. With only one regular-season match remaining, Illinois will try to end the season on a high note before the Big Ten Championships begin on March 6.