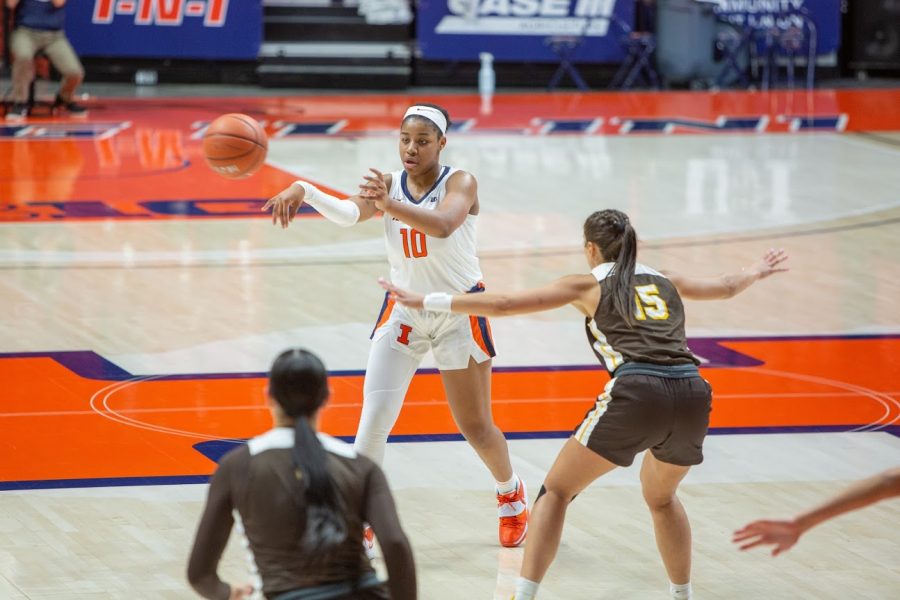 Sophomore guard Jeanae Terry passes during a game against Valparaiso at State Farm Center on Dec. 2. Terry’s confidence on the court and great leadership are for to the team this year.

Flint, Michigan, is no stranger to basketball talent. Just look at the NBA and WNBA, where Flint is represented by players like Draymond Green, Miles Bridges and Deanna Nolan.

Illinois sophomore guard Jeanae Terry is trying to write her own path as the next great Flint player. Despite some struggles as a team, Terry has exploded for the Illini recently. In her last five games, Terry is averaging 18 points, 10.4 rebounds and six assists per game while shooting an efficient 46.8% from the floor.

Terry has developed immensely in her short time at Illinois. In just her second year with the team, Terry has shaken off a middle of the season lull and is playing like a superstar.

“In the beginning of the season, I had a lot of ups and downs being aggressive,” Terry said. “These five games (have) been about being confident and aggressive and looking inside. I think these games have just been me using my IQ against other players and knowing what spots are good for me on the floor.”

Finding her spots on offense has been key for Terry, and her scoring jumps out as a result. She has broken double digits in each of the last five games, but she’s not just taking high volume-shots. Terry is scoring from three levels and forcing the defense to stay honest.

Rebounding is a big part of Terry’s success. She is averaging a team-high nine rebounds per game, but her rebounds impact the game in a different way. When Terry gets a defensive rebound, she’s looking to push the ball and create transition opportunities.

Terry is a decision-maker who makes plays when she has the ball in her hands, so the Illini benefit from her getting those rebounds and making decisions.

Terry is also the team leader in assists. She’s always been a great passer, but this skillset only adds to her ability to change the game in a multitude of ways. It allows Illini head coach Nancy Fahey to change up lineups.

“It’s kind of game to game. We need her in the backcourt as much as we need her in the four spot,” Fahey said. “We’re trying to use her to her best ability knowing that she’s that versatile, and we can use that in a lot of different areas.”

Terry’s defense has also been stout in this run. It’s easy to see the Wisconsin and Purdue games and think five steals in each of those games is what tells the story, but that only scratches the surface. Her off-ball defense is improving, and she is playing quality team defense all the way around.

Her game has developed beyond statistics. A year ago, she was still learning to be a college basketball player. Now, she’s learning how to lead a team.

Her voice has grown, and it shows through her communication on the court. When Terry draws a charge, she will let out a primal scream. When a teammate makes an and-one, Terry will clap and cheer on her teammates.

“She’s taken a leadership role, and she’s taken the shots she’s needed to take. She’s leading the team, showing that this is what we need to do to score,” said sophomore guard Jada Peebles. “She’s doing what she needs to do on the court for us to get a win.”

Terry is still not the extravert one might think. When talking with the media, she’s quiet and shy, but the best comes out of her when playing with her teammates on the court.

The Illini have needed this outburst from Terry. Last year, Illinois had great perimeter play from players like Petra Holešínská and Ali Andrews, but they lacked size inside. Fahey thought she might have solved the problem by bringing in transfer center Eva Rubin. Instead, it created a whole new problem.

The departures of Holešínská and Andrews created a scoring gap the Illini have not made up. They currently rank last in the Big Ten in scoring, but the Illini’s numbers have been increasing.

The Illini still have a way to go, but with Terry emerging as the next Illini great, she’s on track to reach stardom like many of her Flint predecessors.