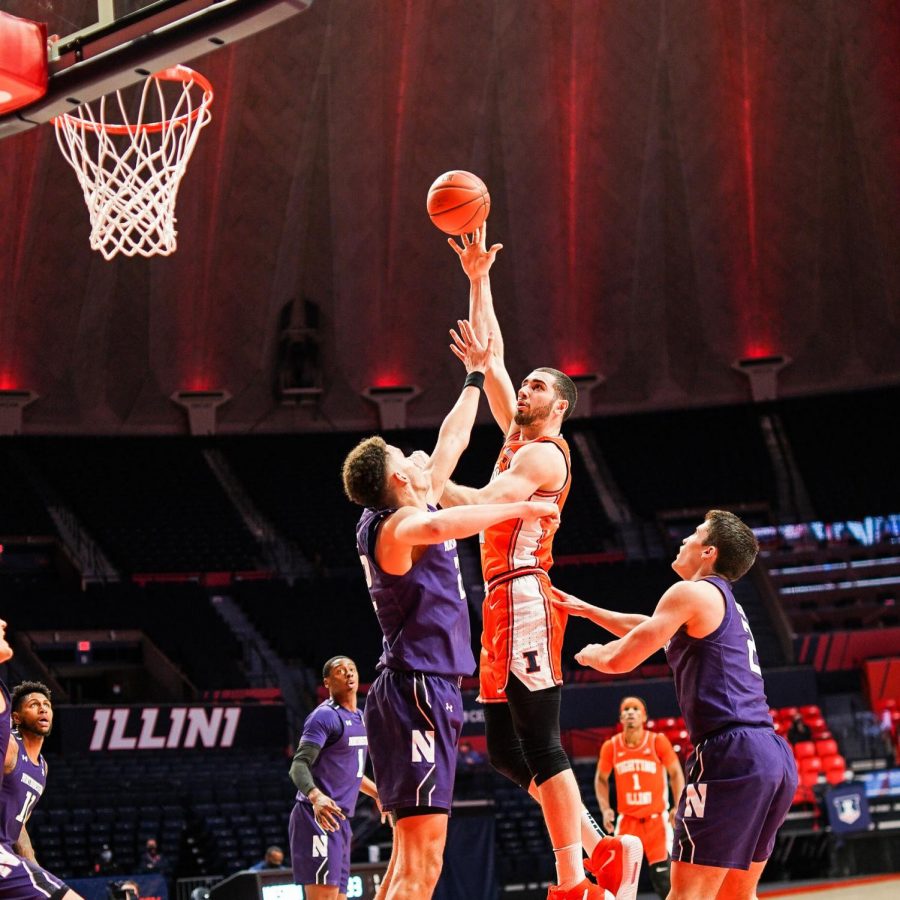 Giorgi Bezhanishvili puts up a shot in Illinois’ game against Northwestern Tuesday night. The Illini won 73-66.

With his team winning by just three points late, Da’Monte Williams knew Illinois needed a stop. The Northwestern Wildcats had all the momentum and seemed to be one big shot away from having a real shot at upsetting the No. 5 Illini on Tuesday night.

Williams picked up Northwestern’s point guard Boo Buie and cut off his drive. Buie retreated with his right hand but left his dribble too high. Williams snuck his hand in and tapped the ball away, leading to a Buie foul on the loose ball.

Williams would sink one of two free throws, making it a two-possession game and giving Illinois the cushion to sneak away from Northwestern 73-66.

“He plays the game for everybody else and he plays the right way,” Kofi Cockburn said of his teammate. “So when he gets steals like those, we expect it. And we just applaud him for being the player.”

Unlike the Nebraska game, Illinois got out to an early lead. They were on fire early, making nine of their first 13 shots. Eight of those makes were assisted. The Illini started 4-4 from deep, aided by consecutive makes from Adam Miller. At the under-eight media timeout, the Illini led 25-9.

Kofi Cockburn picked up his second foul with 11:24 left in the half, but the team didn’t miss a beat. Giorgi Bezhanishvili used his size and strength to power his way to a team-high 10 first-half points and showed he can be a viable option if the All-Big Ten center gets into foul trouble.

“Our guys know Giorgi can really really score it, “ Underwood said. “We got him the ball and he had a really really nice first half.”

Despite leading by 18 at one point, the Wildcats made some buckets down the end of the first stanza to cut the deficit to 12. The Illini turned the ball over eight times in the final eight minutes of the first. Chris Collins went to a 3-2 zone and the Illini seemed stifled. The Illini went 2-9 to start the second half as the Wildcats started to come back. A Miller Kopp one-dribble pull-up over Trent Frazier rattled in, and the Wildcats trailed by just four, their closest margin since 17:40 remaining in the first half.

Illinois regained a double-digit lead through the play of Cockburn, who punished Northwestern inside for 13 second-half points. But the Wildcats wouldn’t die. An 11-0 run capped by a Pete Nance running hook shot over Bezhanishvili, made it a one-point game with just over four minutes remaining.

Most teams might fold under the pressure of a potential home upset as a top-five team to an unranked in-state rival. But Ayo Dosunmu, who had three points at the time, dug into his bag of tricks for another late-game bucket display. First, he calmly stepped up and drained a one-dribble pull-up two from the right-wing. Northwestern would again make it a two-point game, but Dosunmu buried consecutive deep threes to finally put the Wildcats to rest. The first make coming from well-beyond the three-point line, but Dosunmu knew it felt good the second it left his hands.

“I just believed in my shot and dropped the follow-through,” Dosunmu said. “I work on those shots every day. My teammates joke at me and I be saying ‘Logo Dos’…I just believe it’s going in.”

The Illini again struggled to put together 40 consecutive standout minutes but were still able to walk away with the win, the team’s sixth straight. But Underwood knows they’ll need to bring it for some of their tougher road games down the stretch of the regular season and in March.