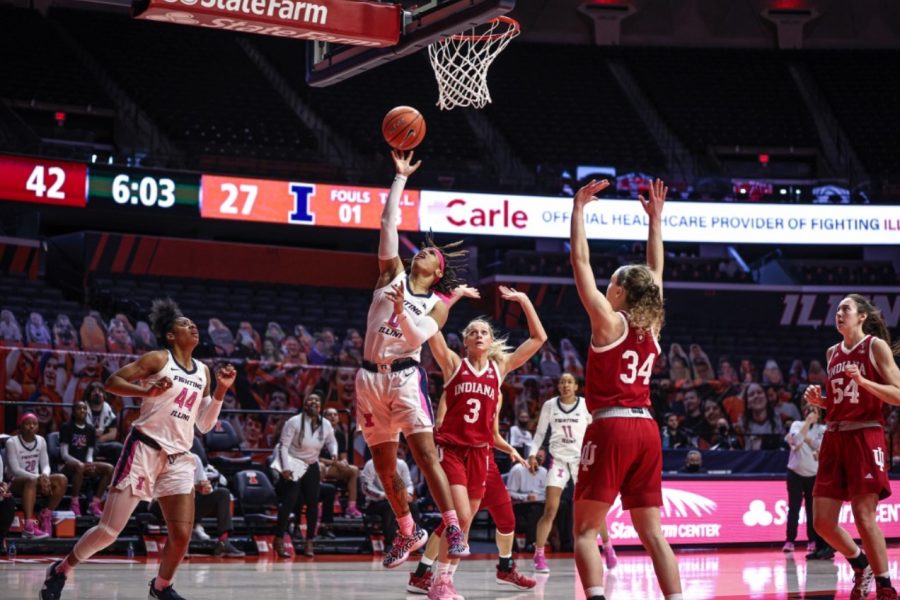 Junior J-Naya Ephraim goes for a layup during the game against Indiana on Sunday. The Illinois women’s basketball team will face Maryland tonight.

The Terrapins sit atop the conference and are outscoring opponents by an average of 18.4 points per game. Just under 30% of the team’s points come from 3-pointers, so shots from behind the arc are something Illinois will need to be mindful of.

About 17.6% of the team’s points are scored at the charity stripe, and the team average is 16.1 free throws per game.

“16 points from the free-throw line are free,” head coach Nancy Fahey said. “You have to go with the analytics and try to play the game that way.”

Illinois sometimes gets in foul trouble, and the Terrapins’ ability to get to the free-throw line might pose a problem for the Illini. The Illini have an average of almost 18.4 fouls per game, and 19.6% of opponents’ points come from the free-throw line this season. In the second quarter of Sunday’s game alone, Indiana hit nine free throws, one point more than their margin of victory of eight points.

Maryland has dominated in the Big Ten this season and has blown out its last three opponents by over 20 points after losing to Ohio State by two points on Jan. 25. Maryland sophomore guard Ashley Owusu leads the Terrapins with 19.3 points per game, which is more than the Terrapins’ average margin of victory. Making sure Maryland doesn’t get many 3-pointers will be key to an Illini win, but that’s a tall order given the versatility of Maryland’s offense.

“There’s a reason … every one of their players can hit threes,” Fahey said. “Get back on defense and … play a lot of team D.”

The odds are not in Illinois’ favor to defeat Maryland, but heading out of College Park with a win would be a historic first for the Illini. The programs have met 11 times in their history, and Illinois hasn’t won a single matchup. A 71-62 Illinois loss in 2019 — the Illini’s last visit to College Park — was the only game Maryland did not win by double digits.

Tip-off is currently set for 12 p.m. central time, and fans can catch the game on the Big Ten Network. Most Illinois games air on BTN+, which requires a subscription for fans tuning in off-campus, but with the game airing on BTN, the team is eager to take on Maryland.

“They like to keep it down to play fast,” said junior center Eva Rubin. “We’re gonna try to slow them down and control the pace of the game a little bit more on our end, but we’re excited for the challenge for sure.”