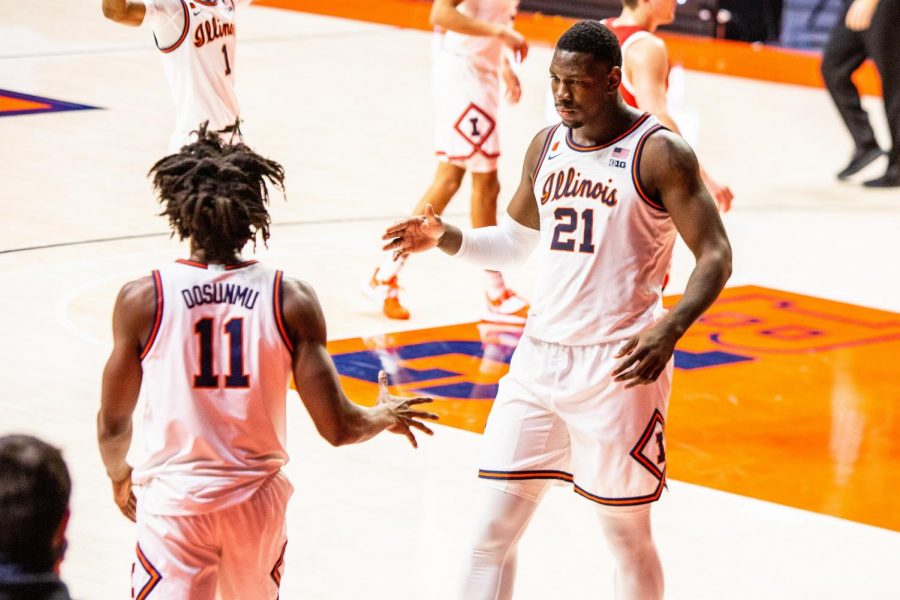 Ayo Dosunmu and Kofi Cockburn go to high five each other in a game against Wisconsin on Feb. 6.

Once again, Illinois found itself in a too-close-for-comfort game against a bottom-of-the-Big Ten opponent. While never trailing against Northwestern, the Illini let the Wildcats hang around all game, with their lead shrinking to just one late in the second half.

But, the Illini have Ayo Dosunmu on their team, so it’s no surprise they pulled away with the late-game win. After scoring just three points in the first half, Dosunmu’s superhero persona appeared, and he scored 10 points in the final seven and a half minutes of the game.

Like Scott Van Pelt discussed on SportsCenter Tuesday night, Dosunmu is a legitimate frontrunner for the Naismith Player of the Year award. Although impressive, it’s not even surprising anymore when Dosunmu pulls out consecutive daggers when the Illini need it most. On Tuesday, those were back-to-back three-pointers to increase Illinois’ lead from two points to eight points with 39 seconds left in regulation.

Finishing the night with 13 points, Dosunmu had a shaky first half around the rim, shooting 1-3 from the field while playing all but one minute. However, the Illini junior has continued to prove his worth off the ball, as he dished out five assists during the first half, a team-high.

While Dosunmu saved the game with his shot once again, his value this season has been highlighted by his all-around abilities. The Chicago native has excelled in every single aspect of the game, whether it’s locking down his assignment on defense, grabbing defensive rebounds, making swift passes to the big men or finding his fellow guards open for threes.

Miller has yet to find a consistent groove this season, as he struggles to stay hot through 40 minutes. The freshman opened up Tuesday night strong, hitting back-to-back three-pointers about six minutes into the first half. Miller went on to miss his next seven shot attempts before hitting another three about eight minutes into the second half.

The freshman showed up on defense, though, grabbing three rebounds and notching two steals. Miller’s defense has looked stellar through the majority of the Big Ten season, and even when his shot isn’t going in, it still looks good coming out of his hands. If Miller can get hot and stay that way once the NCAA tournament rolls around, his value will skyrocket.

Frazier is another guard who has struggled with offensive consistency this season, but the senior put up a quiet nine points, including three free throws and two three-pointers. The best part about Frazier is he knows how to turn it on at the right moments. Late in the second half when Northwestern was hunting for the comeback, Frazier drained a deep ball to push the Illini lead from four to seven points.

While Frazier was still strong on defense, Northwestern’s Chase Audige did put pressure on the Illini senior. Audige went for a game-high 22 points compared to his usual 12.8 points per game, but it did take 21 shot attempts to get to that point, as Frazier kept him honest.

Grandison started the game hot, scoring five points in the first three minutes of the game. However, that would be the end of his production for the night, as the junior attempted just one more shot the rest of the game.

The starting forward played just 12 minutes against Northwestern, adding a few rebounds and a pair of assists to his stat line. While Grandison hasn’t been super efficient recently, his addition to the starting lineup sparked the Illini’s current six-game win streak.

Along with Dosunmu, Cockburn also came alive late in the game, scoring 13 of his 17 total points in the second half. Illinois outscored Northwestern 34-30 in the paint on Tuesday, and Cockburn helped dominate in that area, grabbing 10 rebounds and adding one block. Cockburn notched his 15th double-double this season and his 12th through 14 Big Ten games.

Cockburn’s start to the game, however, wasn’t as pretty, as he played just under five minutes in the first half after getting into foul trouble. However, the Illini big highlighted his maturity and growth, as he didn’t let his emotions carry onto the court in the second half.

The sophomore center also showcased his vast improvements on defense, moving quicker along the perimeter and even locking down Northwestern’s star guard Chase Audige near the three-point line in the second half. Cockburn also helped hold Miller Kopp to six points, as he averages 12.4 points per game.

Typically when Cockburn gets into foul trouble early in the game, as he did on Tuesday, the Illini begin to crumble. Instead, Bezhanishvili subbed in for the sophomore and picked up right where Cockburn left off, leading the Illini with 10 first-half points.

Bezhanishvili looked energized in the paint, taking a page out of Cockburn’s book with an explosive dunk in the first half. While Bezhanishvili can get in a habit of shooting untimely shots, he was efficient on Tuesday, going 5-7 from the field. The Illini junior only played two minutes in the second half, but it would’ve been a disservice to bench Cockburn, as he was rolling from the jump.

While Williams has come off the bench in Illinois’ last six games, that hasn’t hindered his title of being one of the best glue guys in college basketball. When the Illini needed someone to step up on defense on Tuesday, Williams was there to pick Boo Buie’s pocket and draw a foul to extend Illinois’ lead to two possessions with four minutes to play.

Dosunmu made the closing shots, but without Williams’ extending the Illini lead when it seemed the Wildcats were gaining momentum, I could be writing an entirely different story right now. While Williams scored just five points, he tied Dosunmu for a team-high five assists, and his passing inside looked elite.

Williams didn’t just play aggressive defense at the end of the game but throughout the entire 40 minutes. In the first half, Williams had one of the most beautiful defensive sequences — calling out a ball screen, fronting Pete Nance, denying a pass then finishing with a block-off help defense. Williams may not score as much as Dosunmu or Cockburn, but he sure earned himself a comparable grade.

While Curbelo was aggressive on the boards against Northwestern, grabbing seven rebounds, the freshman has continued his sloppy play of recent, combining for just two points and nine turnovers over the last three games. Curbelo struggled a bit to find a rhythm in transition and couldn’t find his bigs for any more than two assists.

Curbelo’s defense has been steadily improving this season, but it hasn’t been enough to overcome his offensive woes. The freshman also struggled to get easy points on Tuesday, missing all three free-throw attempts and making just one of three shots, including two rough three-point attempts.