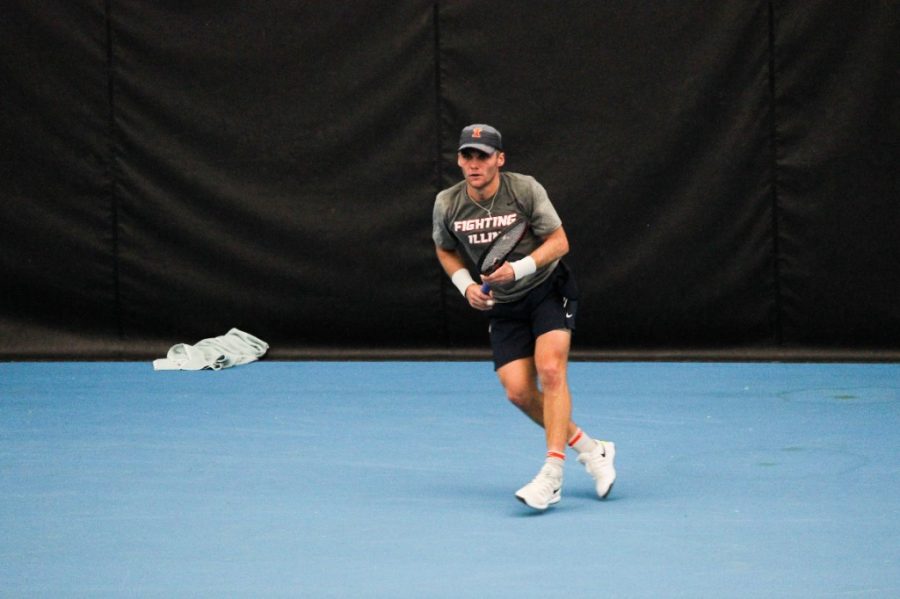 Senior Zeke Clark competes in the match against Virginia on Sunday. Clark is the Illini of the Week.

Like many spring sports athletes, Zeke Clark grappled with a tough decision after his senior season was cut short: should he return to Illinois for a fifth season and take advantage of the extra year of eligibility granted to spring sport athletes, or should he depart the program after four years in Champaign-Urbana following a disappointing season that was shortened due to the COVID-19 pandemic?

Ultimately, the decision wasn’t tough, and the Tulsa, Oklahoma native opted to represent the Illini for a fifth year. Clark wasn’t the only senior to return for an extra season, as Vuk Budic, Noe Khlif and Aleks Kovacevic also chose to use the extra year of eligibility.

Having a veteran presence is always important, but it’s even more of an advantage in tight matches. This weekend, Clark made that presence felt, helping Illinois clinch upset wins over No. 1 Southern California and No. 7 Virginia in the Intercollegiate Tennis Association National Team Indoor Championships.

After taking the doubles points against the top-ranked Trojans on Friday, the Illini jumped out to a 3-0 lead via singles wins from redshirt sophomore Siphosothando Montsi and junior Kweisi Kenyatte, and the team was just one point away from sealing a historic victory.

Knowing his team was on the brink of an upset, Clark locked in. The senior dominated in his match, winning 7-5, 7-5, to knock the defending tournament champions out of the competition in the first round. The win was also Illinois’ first victory over a top-ranked program since 2006.

“There’s really no better feeling than coming through for your teammates, for your coaches, for a program that I care so much about and invested so much into,” Clark said. “It’s the best feeling in the world.”

Clark wasn’t satisfied just yet, as he was called upon once again on Sunday in the third-place game against the seventh-ranked Cavaliers.

This time, the Illini weren’t able to pick up the doubles point, meaning they would need to win four of their six singles matches to pull off their second upset of the weekend. Head coach Brad Dancer knew the team could get the job done.

“Even if we win the doubles, it’s only one point,” Dancer said. “Win or lose, you gotta be ready to play singles, no matter what.”

It wasn’t smooth sailing in singles play, and the Illini found themselves in a 3-1 hole with three matches yet to finish. Montsi and freshman Hunter Heck pulled out close victories, and Clark’s match was the only one still in progress.

After eking out a victory in the first set against Jeffrey von der Schulenburg, the third-ranked player on the ITA’s top-10 newcomers list, Clark lost in the second frame. Undeterred, the fifth-year senior understood that his teammates and coaches were counting on him to get the job done, and he used their energy to keep himself going.

“The guys not playing took it as a challenge to be even more animated than they already were with fans,” Clark said. “They made sure to create that chaotic atmosphere that we thrive in, especially inside Atkins … we gotta do everything we can to make as much noise and uplift our guys as much as possible.”

After battling hard all day, Clark came through for the Illini, winning the final set, 6-3, to clinch the team’s second upset victory of the weekend.

Clark wasn’t always able to get the job done in tight matches, especially early in his college career. In his sophomore season, he lost twice in situations where the match was tied 3-3.

“That was something I struggled with early on in my career,” Clark said. “I struggled in some of those big moments because I wanted it so bad for the team. I put so much pressure on myself in some of those tight situations during a match tied at 3-3, and I would crumble because of all that pressure I was putting on myself.

“I’m so thankful that I have coaches and teammates that continue to have trust in me … I’ve done it enough where I now have confidence in the big moments.”

Dancer says Clark’s growth has been significant, as the fifth-year senior is now visibly calmer on the court. Clark has fine-tuned other weapons, including better transition play, a confident first serve and a more versatile forehand, but the intangible qualities he possesses stand out the most.

“He’s just an incredible young man with a lot of empathy for others,” Dancer said. “He cares about his teammates more than you can imagine. He’s just a contagious person to be around … he’s just a phenomenal person, and I feel lucky to coach him.”

With the win, the Illini jumped up to No. 6 in this week’s rankings, while Clark was named the Big Ten’s men’s tennis athlete of the week for the first time in his career.

Though Clark was able to seal the upsets, he doesn’t want to take too much credit.

“This year, all I’ve been focused on is wherever I play in the lineup, going out and winning my match. That’s my one and only focus,” Clark said. “To be honest, I’m at the point where all I care about is winning for the team, and I could care less about my individual rankings or whatever comes with that.

“I’m confident in our guys and myself to go out and beat anyone in the country.”