Illini to kick off All-Big Ten schedule in Florida bubble 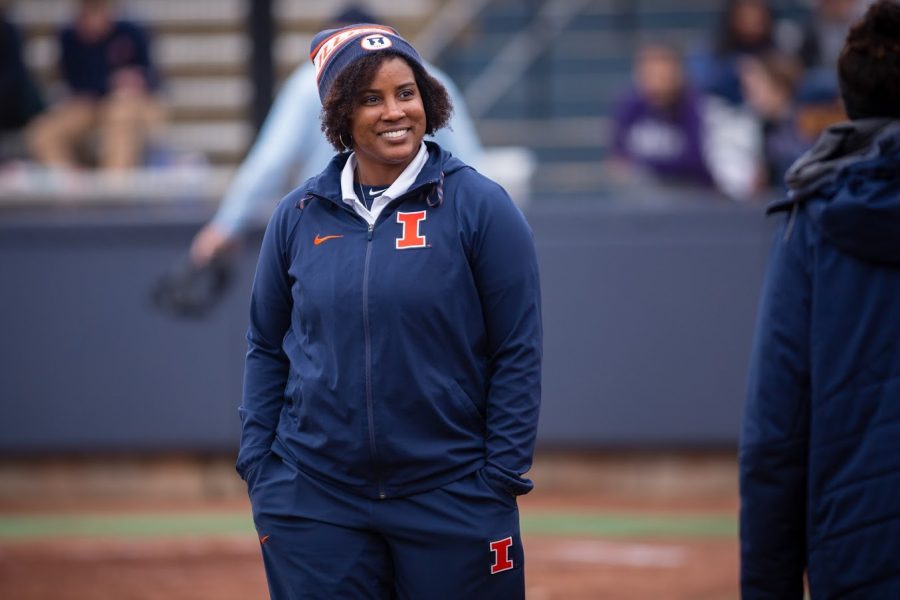 Illinois head coach Tyra Perry smiles as she walks past the Illinois dugout during the game against Northwestern at Eichelberger Field on Mar. 28, 2018. Perry is excited for her team to begin play soon.

Disappointment was the theme of last season, as an incredibly young softball team lost the opportunity to get their feet wet in one of the strongest softball conferences.

After months of practice, a more-seasoned, pitcher-led team is set to kick off an All-Big Ten season, starting with a 12-game set in the Sunshine State.

“It will be nice to play,” said head coach Tyra Perry. “It’s tough watching others play. To have the opportunity to play means everything, especially after 2020.”

To contain the spread of coronavirus and protect its athletes, the Big Ten released a 44-game regular-season schedule that goes into mid-May for the 2021 season. With the weather being too cold in the north, however, the conference booked a neutral-site stadium in Leesburg, Florida, for the Big Ten programs to compete in until mid-March.

While 70- and 80-degree days on the diamond in Florida sounds nicer than staying up north in Urbana, Illinois’ trip down south is not a vacation. The conference has bubbled off the Orlando suburb, so the Illini don’t expect to go out swimming or visiting Disney World.

“You are always worried about getting sick or something, but the Big Ten has done a great job making sure we are safe in the bubble,” Perry said. “The Florida part is just for the weather.”

While the site is open for fans, they’re limited to four blood relatives for every athlete. Once their game is over, the Illini will return to the hotel, as they aren’t allowed to stay at the site to watch conference rivals play.

While every Big Ten program is competing in Leesburg, the Illini will only face a handful of teams. After opening up the season with a two-game series with Rutgers, Illinois will have ten more combined games against Maryland, Michigan, Michigan State and Penn State, respectively.

Last season, pitchers Addy Jarvis and Sidney Sickels dominated the headlines and carried the team, as they pitched nearly every inning for the offensively-challenged team. The two both had earned run averages below 2.50, while Sickels added another dimension, as she was also the closing pitcher.

While the two aces should still expect to have a major impact on the program, Perry plans on getting more pitchers involved in the rotation, including freshman Tori McQueen.

“We have a great pitching staff. I’m excited to see what they do on the mound this year,” Perry said.

Hitting was the team’s Achilles’ heel last season, as the Illini batted only .226 as a team. Last season’s team was very young, and Perry has liked what she has seen from her sophomores, especially from third baseman Delaney Rummel.

“Everyone has worked extremely hard, but the freshman group last year has had the most growth,” Perry said. “We are excited about (Rummel’s) bat and leadership. She is just an all-around player.”

Though Rummel finished the year on a cold streak — which plummeted her batting average below .200 — she still showcased a lot of potential, especially with her power hitting. She led the team with five home runs in only 62 at-bats. Now, with Perry having Rummel get to experience playing catcher this off-season, the sophomore will be able to help out the team on the field.

With a conference-only schedule, Illinois will miss out on the opportunity to secure likely wins against smaller conferences. Though there’s a good chance the Illini’s record will suffer, Perry thinks it won’t hurt them come NCAA tournament time due to the conference’s reputation.

“The Big Ten is always one of the most dominant conferences every year,” Perry said. “We generally send six teams into the postseason, and we’re hoping to send more. We are going to be beating up on each other, (but the NCAA) has loosened some of the perimeters.”