Illinois falls back into losing streak with loss to Maryland 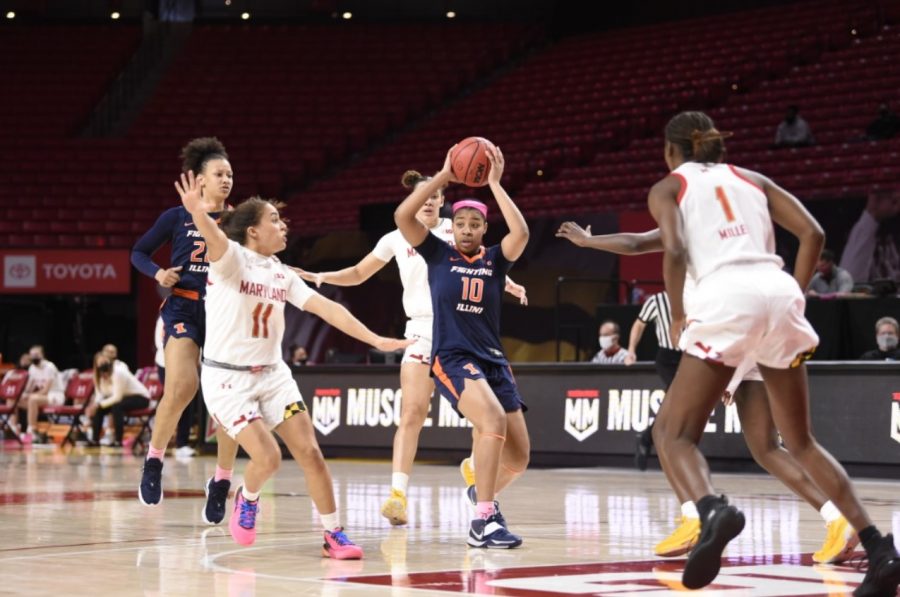 Sophomore Jeanae Terry looks to pass during the game against Maryland on Wednesday. The Illini fell 103-58.

“It’s disappointing,” said head coach Nancy Fahey. “When you play a team of that caliber, you can’t put yourself in that kind of hole early.”

Maryland got off to a fast start, taking a 10-0 lead in the first 2.5 minutes of play. The Terrapins led by double digits the rest of the way.

Illinois’ deficit only grew as the first quarter progressed, finding themselves down 15-2 halfway through the first. Junior center Eva Rubin picked up a technical foul with just under five minutes left in the first. It would be Rubin’s only foul of the game, and Benzan made the free throws.

Maryland’s dominance continued through the first. By the eight-minute mark in the game, Maryland had climbed to a 20-point, 27-7 lead.

“That first quarter really killed us because we just, we adjusted too late to the pressure,” Peebles said. “I think we just have to learn how to get our offense moving, learn how to break the press better with that, just not let the pressure get to us and just play our own game.”

Coming into the game, curbing turnovers was going to be important for Illinois. That didn’t happen — the team had 11 turnovers in the first 10 minutes as Maryland climbed to a double-digit lead. The team curbed it to four turnovers in the second 10 minutes after adjusting to Maryland’s press.

The second period was pretty rocky for Illinois. Myles got into foul trouble and had three fouls by the 7:30 mark. Head coach Nancy Fahey subbed in junior forward Geovana Lopes at that point, who played the rest of the half.

“(Myles is) such a force in the boards,” Fahey said. “When we lose her, it just kind of changes some of the ability for us to take care of our (rebounding).”

Halfway through the second, Illinois was down 43-20. Freshman guard Aaliyah McQueen was leading Illinois with five points and Benzan was leading Maryland with 16 points at that point.

The Illini’s scoring offense was somewhat evenly distributed in the first half. Peebles led the Illini with nine points, but freshman guard Aaliyah Nye, Myles, junior guard J-Naya Ephraim and McQueen each had five in the first 20 minutes.

Illinois was outscored 25-22 in the second, which was the only time Maryland didn’t outscore them by 5+ points.

Myles picked up her fourth foul with 6:35 left in the third and Lopes played the rest of the third quarter, scoring two points in the third 10 minutes.

Entering the fourth quarter with a 77-50 Maryland lead, the game had long been decided. Maryland, a team that averages 91.7 points per game, scored its 92nd point of the afternoon on a 3-pointer by forward Faith Masonius with about five minutes left in the game.

As the quarter progressed, Fahey emptied the bench, and players who seldom see the court, including redshirt junior forward Nancy Panagiotopoulou Andritsopoulou, junior guard Tara O’Malley and sophomore forward Solape Amusan, got in the game.

A pair of free throws by Styles put Maryland over the 100 point mark and Illinois closed out the game on a 2:58 scoring drought.

Illinois next plays at Rutgers University on Saturday.