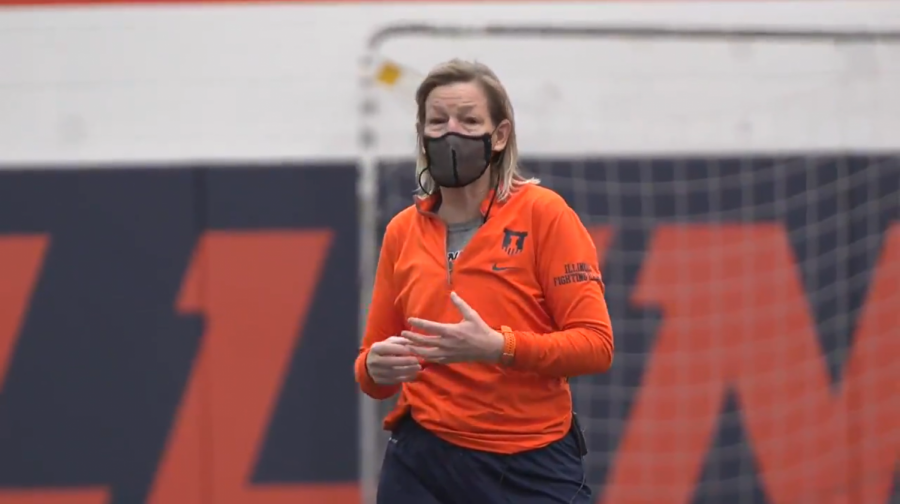 Illinois head soccer coach Janet Rayfield instructs her team during a recent practice. The team will play their first game today against Purdue.

It has been 480 days since the Illinois Women’s soccer team stepped on the field in full uniform to face an opponent. On Thursday, they are set to go against Purdue at Grand Park Complex in Westfield, Indiana.

Due to Demirjian Park not being ready for play and weather not suitable for outdoor play, head coach Janet Rayfield and Purdue head coach Drew Roff explored other options such as the Activities and Recreation Center turf fields. Rayfield credits Roff for the idea of pushing the game to Thursday in order to use Grand Park Complex.

This year marks Rayfield’s 19th season with the Illini. With a unique season about to start, she said that the 480 days might have been the most she has gone without playing or coaching.

The Illini lost five players due to graduation, most notably goalkeeper Jaelyn Cunningham. Currently, the Illini have a four-way race between seniors Sami Sample and Elizabeth Cablk and freshmen Julia Cili and Natalie Phelps to replace Cunningham. The canceled fall season allowed all four to get a lot of training in, as well as play full 90 minutes during the Friday Night Light series.

Cablk and Sample might not have many minutes under their belt, but they know and have faced Big Ten opponents over the last four years.

“They are more than ready to step in and hold down the fort,” Rayfield said. “I think those two will be who we look to lead our defense.”

For the first time in over a year, the Illini will be playing against an opponent and not their teammates. There are no clear expectations for Purdue because just like the Illini, they have been with their teammates practicing for months. One thing Rayfield can expect is the energy that every Big Ten team will have.

Right now the focus is on themselves because, with the first couple of games, information on their opponents is limited. So they just have to make sure they come out to play and are strong in their matches.

“There obviously are going to be a lot of unknowns and not one team playing a game in over a year, we just don’t know anything about our opponent,” senior midfielder Hope Breslin said. “So learning as we go is going to be something that’s a little bit of a challenge, but I think it will also be fun because there won’t be that much pressure of knowing what teams are going to come out and do. So we’re able to play our own game and see how that matches up.”

Energy and excitement are high among the Illini, and they’re ready to get on the field. It’s like a breath of fresh air because they will finally face someone else besides themselves.

“I think if I told them on Monday that they’d play Monday night, they would be ready to play,” Rayfield said. “I think they’re ready to put their uniforms and look across and see someone besides a teammate and somebody that doesn’t know everything they’re about to do.”

Illinois and Purdue will face off at 1 p.m. CT, but there will be no live stream. However, live stats via fightingillini.com will be accessible.