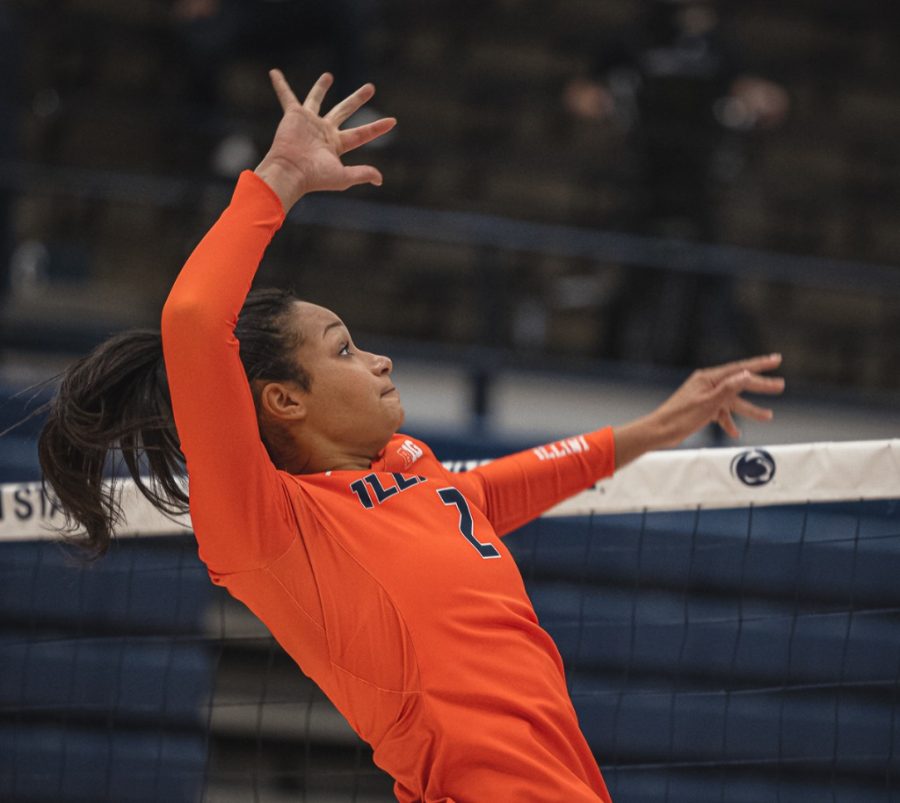 Sophomore Rylee Hinton jumps to spike the ball during the match against Penn State on Feb. 7. The Illinois volleyball team will face Ohio State this weekend.

Illinois will host Ohio State on Friday and Saturday at 5 p.m. and 3 p.m., respectively. So far, the Buckeyes are 7-0 and currently ranked just outside the top 25, receiving votes this past week but not enough to earn a ranking.

While Ohio State may seem like a bit of a juggernaut with its 7-0 record, four of its wins have gone five sets. While the team has been winning, it has not been dominant, so the Illini may have a good opportunity to hand them their first loss of the season.

The Illini didn’t compete this past week due to COVID-19 concerns with Northwestern, so they’ve had extra time to tune up and prepare for the Buckeyes. According to head coach Chris Tamas, there’s been a lot of debriefing from the team’s past two doubleheaders, as the team has found themselves in a bit of a rut with a four-match losing streak.

“I think we’re at a phase right now where we just played two top-ten teams,” Tamas said. “(The losses) definitely weren’t for our lack of effort. I think it’s more just that the team wants it so bad that we really have to hone in and learn. I call it learning how to play free, and that’s difficult to do when they have all these pressures and they’re competitive.”

It seems most of the changes Illinois has been working on internally have been mentality-focused. Illinois has struggled mightily in the first set of matches, something Tamas attributes to butterflies. Beyond just that, however, many of the younger players seem to tighten up when a match gets close.

Illinois has been dealt a tough hand these past few weeks, with the schedule assigning two consecutive top-10 opponents and redshirt freshman Ellie Holzman tearing her ACL. Despite the turbulence, Tamas believes Illinois is on the cusp of being a very good team if they can iron out their inefficiencies that are seemingly due to their youth.

“We’re within five points, or we’re taking sets off big-time teams,” Tamas said. “Not that we’re going to talk about moral victory here, but we have our chances. There’s 10-15 plays per match that we’ve identified that are within our control, and now can you convert maybe half of those. You’re not going to convert every single one, but if you can convert half, it’s just that much better of a chance to score more points and hopefully a chance at winning games.”

The biggest matchups to look out for will be with Ohio State’s hitters. At outside hitter, Ohio State has been starting freshman Emily Londot, who was an Under Armor All-American her senior year in high school. She’s coming fresh off of a 20-kill performance in a win over No. 8 Penn State.

At outside hitter, Ohio State has another talented player in sophomore Jenaisya Moore, who was a Big Ten All-Freshman last year. This year, Moore is averaging 3.04 kills per set, good for second on the team, only to Londot’s 3.79.

Illinois will get to see a familiar face on the opposing sideline in Ohio State’s newly minted head coach, Jen Flynn Oldenburg. Oldenburg spent 9 years at Illinois as an assistant coach between 2003-2012.