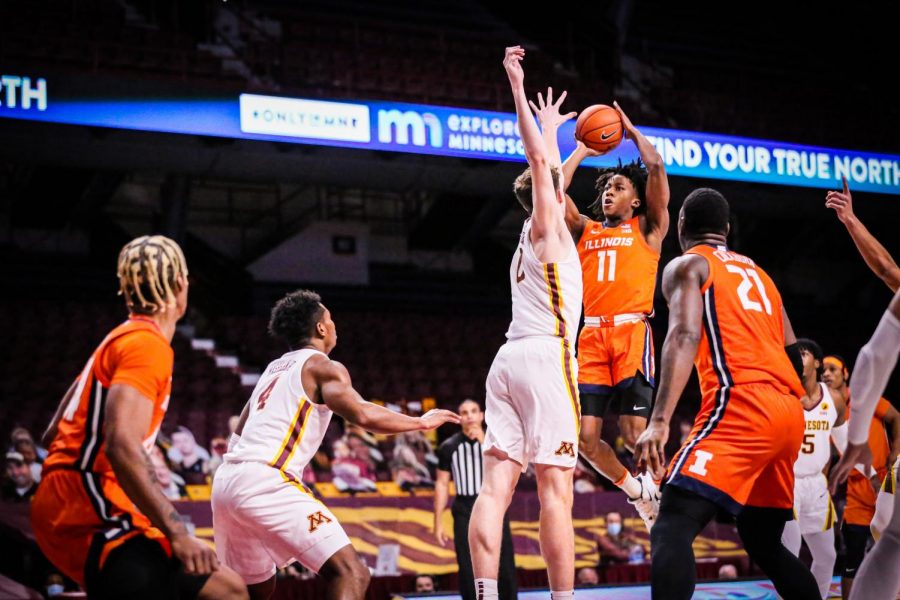 Junior Ayo Dosunmu shoots the ball in the first half against Minnesota on Feb. 20. Dosunmu notched his second triple-double of the season in the 94-63 win.

With the first half winding down, Trent Frazier knew Minnesota wanted to get the ball to its lead guard, Marcus Carr.

The Golden Gophers tried to reverse the ball to Carr, but like a defensive back, Frazier swooped in and stole the ball, took one dribble and hoisted a heave from the half-court line. The ball swished through the net, as Frazier’s momentum carried him below the basket. He then chest-bumped Andre Curbelo, as the Illini completed a 10-0 run and took a 48-33 lead into halftime. This was a sight Frazier’s teammates had seen before.

“I’m telling you, every damn practice before we huddle in, Trent catches the ball and shoots it from half court,” Ayo Dosunmu said. “Make or miss, we end practice like that, so when I seen it out of his hands, I’m like ‘that’s cash.’”

The Illini would continue to dominate the Golden Gophers in the second half, going on to win 94-63.

Minnesota entered the game 13-1 at home and jumped out to a 16-11 lead after consecutive threes from Carr, but Illinois countered with its first run of the game, a quick eight points capped by a corner three from Jacob Grandison.

The Golden Gophers would hang around until the Illini pulled away at the end of the half. They used six first-half steals to score 13 points off turnovers, including Frazier’s trey to end the half.

The second half was much of the same for the Illini. Kofi Cockburn continued to pound the Golden Gophers inside, finishing with 22 points and six rebounds.

Scoring was balanced and plentiful for the Illini, as the 94 points were Illinois’ second-most in conference play this season. The 27 assists were also the team’s most in a game since late November. Illinois started the second half shooting 18 for 22. They exploded in transition, going for 31 points in that regard. Underwood attributed the stern defense leading into easy offense.

“It was our ability to go rebound,” Underwood said. “When our guards have big rebounding nights, usually our numbers in transition are good. Here’s a team in Minnesota that averages 80 (points) at home, and we had them in the mid-60s, and that turned into easy offense.”

Another storyline was Dosunmu’s hunt for his second triple-double of the season. Dosunmu had just eight points, four assists and two rebounds at halftime, but he started to turn it up in the second half. He found his bigs in the paint, shooters on the wings and guards in transition. Underwood even left him in at the end despite a huge lead. Dosunmu snagged his 10th rebound with under two minutes left, securing that second triple-double of the season and the first road triple-double in Illinois history. It was another impressive feat for the guard who’s chasing end-of-the-season honors.

“I don’t know who’s any better?” Underwood asked rhetorically to media members after the game. “I have no idea who in the hell anyone thinks is better than him right now.”