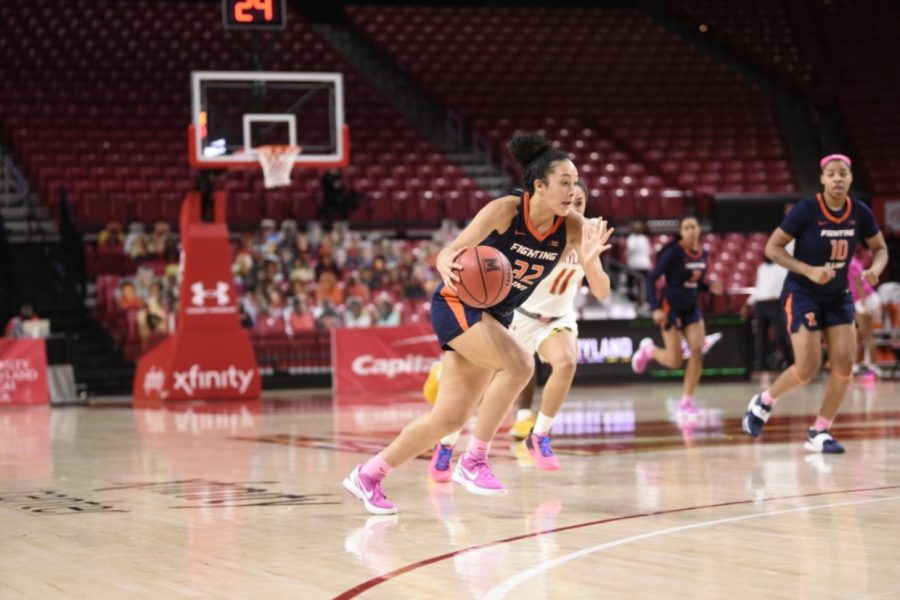 Freshman Aaliyah Nye pushes forward during the game against Maryland on Wednesday. The women’s basketball team will face Rutgers today.

Coming off a blowout loss to Maryland, the Illinois women’s basketball team will look to get a win against Rutgers.

In their last outing, the Illini struggled early in large part because of Maryland’s full court press, and they will have to play a similar type of defense against Rutgers.

“One of the good things is that (Rutgers) play a little bit like Maryland with their press,” said sophomore forward Kennedi Myles. “We’ve already seen how that full-court pressure is with getting the ball up the court, which is something that we struggled with in the beginning of our game against Maryland.”

The Scarlet Knights have had a roller coaster of a season. They won five of their first six games to start the season, blowing out opponents by 40 points in four of those games.

Back-to-back losses toward the turn of the calendar, and Rutgers was reeling. A long COVID shutdown ensued, and the Scarlet Knights missed their next eight games and took off for over a month.

Ever since they came back, Rutgers has been rolling, winning its last four games and just barely missing out on being ranked. The Scarlet Knights currently lead the Big Ten in scoring margin in large part because of their backcourt of redshirt senior guard Arella Guirantes and freshman guard Diamond Johnson.

“Guirantes is a special player, and (Rutgers) does a good job of setting her up in different positions,” said head coach Nancy Fahey. “(Guirantes) looks to score one on one, and they do a good job of isolating her, and Diamond Johnson, her ability to shoot from the perimeter makes it one of the more powerful backcourts in terms of scoring.”

The duo is combining for over 40 points per game together, and they do it by taking threes. Guirantes is currently shooting 39% from long range, while Johnson leads the Big Ten with a clip of 53.7%.

It’s going to be an uphill battle for the Illini. Following their first Big Ten win, the Illini have struggled to put together a complete game, though it hasn’t helped that some of their best players have struggled lately.

A five-game stretch at the end of January into the beginning of February saw sophomore guard Jeanae Terry look like one of the best in the Big Ten, but she has put up back-to-back duds.

It doesn’t end there. Myles had high expectations coming into the year, but of late she has regressed offensively. Myles has broken double-digit points just once in her last six games, but she doesn’t seem too concerned.

“There’s really nothing to say, the ball hasn’t been going in,” Myles said. “A lot of my shots have been hard recently.”

The Illini have an interesting matchup in their frontcourt. At 6-foot 5-inches, redshirt junior center Eva Rubin has the ability to get easy buckets in the paint, but since the Scarlet Knights like to press, Fahey will likely opt for more ball handling.

If this game becomes a half-court slugfest, Rubin could have a big impact, as Rutgers does not start anyone over 6-foot-1.

Tipoff is at 11 a.m. from Piscataway, New Jersey.