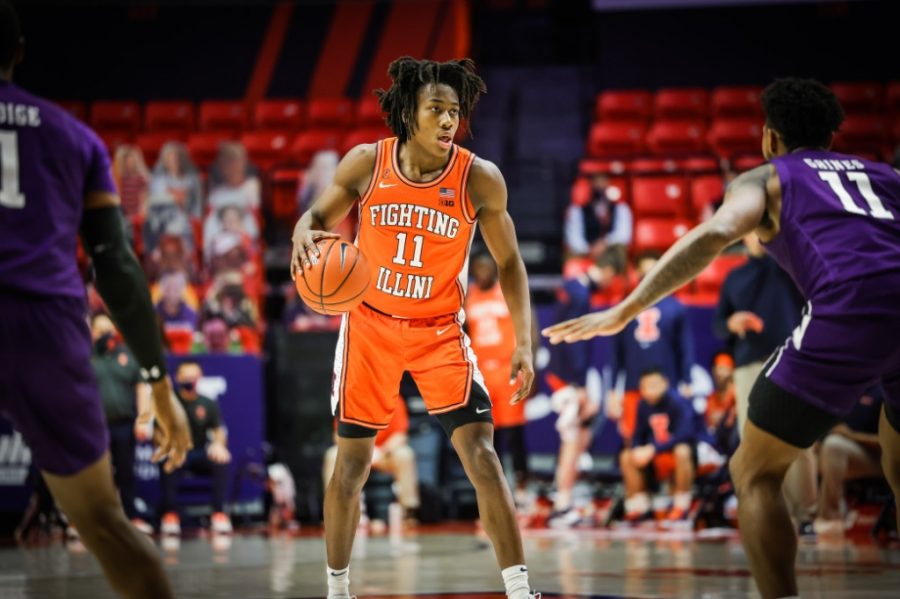 Junior Ayo Dosunmu looks downcourt during the game against Northwestern on Tuesday. The Illini will face Minnesota tonight.

When Illinois heads to Minnesota on Saturday for a game against the Golden Gophers, the Illini will be looking for their seventh straight win and fourth sweep against a Big Ten team this season. A large part of that is due to Illinois’ success against teams when playing them for a second time.

This season, the Illini are 3-0 when playing a team they’ve previously beaten. Brad Underwood’s team had success in that regard last season, going 3-1 against teams they had beaten the first time. The lone loss came at Rutgers without star guard Ayo Dosunmu.

This is a noticeable improvement for Illinois, as they swept just one team in Underwood’s first two seasons — 2017-2018 Rutgers, who finished just 3-15 in conference. Underwood credits this change to his coaching staff and how they prepare his team for games.

“It’s always a little more comfortable as a player. … You know exactly what you’re getting playing against player X is and what he does, and that’s a little comforting,” Underwood said. “The first time you go out there, it takes time to get into the flow of a game. You have a better idea of how teams try to scheme you and what they want to do, and you can prepare for those.”

“That ties into us being connected even more and sacrificing even more so we can get that win,” said senior guard Da’Monte Williams.

On Saturday, the Illini will be faced with a Golden Gopher team that excels in their home gym. They are 13-1 at “The Barn” and 0-8 on the road. Minnesota is one of three gyms that neither Underwood nor Williams have won at in their four years at Illinois (Michigan State and Maryland being the other two).

In Illinois’ first matchup against Minnesota, they held Richard Pitino’s star guard, Marcus Carr, to just 3-13 shooting. Kofi Cockburn dominated on the other end, going for a career-high 33 points and 13 rebounds. Underwood emphasized slowing Carr down will again be an emphasis.

For Underwood and Williams, a win at Minnesota may not seem significant, but it’s another check mark on their four-year voyage. A voyage that started with them going 14-18 and winning just one road game. Now, they’re looking for their twelfth conference win for the second consecutive season and looking to add another clean sweep of a quality Big Ten team to that resume.

The game is scheduled to tip off at 2:30 p.m. Central Time and can be watched on Fox.