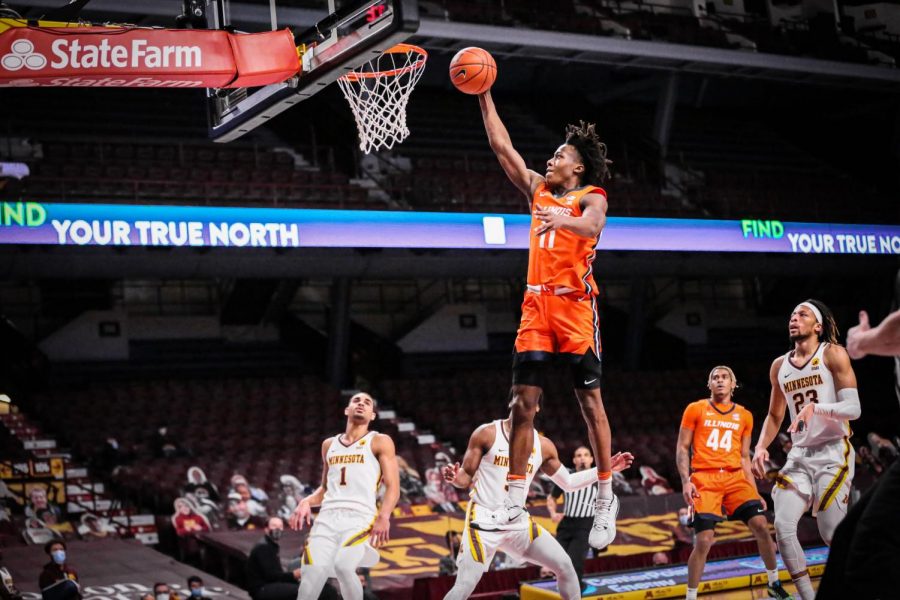 Ayo Dosunmu goes for a dunk against Minnesota on Feb. 20. Dosunmu notched his second triple-double of the season in a 94-63 win over the Golden Gophers.

After narrow wins over Indiana, Northwestern and Nebraska over the last two weeks, Illinois traveled to “The Barn” to take on Minnesota. The Golden Gophers are dominant on their home court, where they have defeated the Hawkeyes, Wolverines and Buckeyes by an average of 14 points. They also entered the matchup with a 13-1 home record, the second-best home win percentage in the Big Ten.

Despite recent disappointing performances, the Illini came out firing on all cylinders, dominating for most of the game due to their efficient shooting, intense defense and a significant size advantage, leading to a 94-63 win that extended the team’s win streak to seven games.

It’s pretty easy to say that the Illini put together their best game of the season, but let’s take a more in-depth look at eight performances from the win.

Note: Coleman Hawkins (two points), Benjamin Bosmans-Verdonk (two points), Jermaine Hamlin (one point), Tyler Underwood, Connor Serven and Brandon Lieb all got playing time on Saturday, though they did not play enough for me to fairly assess their performances.

Dosunmu’s decision to withdraw his name from the NBA draft and return to Champaign for a third season was already enough for many Illini fans, but the Chicago native continues to dazzle and rewrite history. On Saturday, Dosunmu notched his second-career triple-double after getting his first just two weeks ago, putting up 19 points, 10 rebounds and 10 assists in the dominant win.

After scoring eight points in the first half, Dosunmu kicked into second gear in the second half, but it was his vision that impressed the most. The junior guard frequently found teammates for dunks, including junior Giorgi Bezhanishvili and sophomore Kofi Cockburn. This selflessness is one of the reasons why Dosunmu is one of the best players in all of college basketball, and it’s easy to understand why he’s in the conversation for the Naismith and Big Ten Player of the Year awards.

Performances like this are essential if the Illini want to make a deep postseason run in March, while it also shows why Dosunmu is such a unique player and one of the best to ever don the orange and blue of Illinois.

It’s hard to describe how important Frazier is to this Illini team. His defensive dominance and determination, combined with his efficient scoring, were on full display on Saturday, and the senior guard finished with 15 points, four assists and six steals, the most steals by an Illini player since Luther Head had six in 2005.

It’s no surprise to see such impressive defensive displays from Frazier, as he is typically tasked with guarding the opposition’s best scorers. Saturday was no different, as the Florida native guarded star guard Marcus Carr for most of the afternoon. Frazier held Carr, who averages 19.4 points per game, to just 12 points on 3-11 shooting, including just four points in the second half.

Frazier is known for his 3-point shooting, and after getting an early trey to fall, the senior gained confidence in his shooting from everywhere on the court, as he went 5-9 on all field goal attempts. After scoring a 70-footer to beat the buzzer against Nebraska last season, Frazier took another attempt from deep on Saturday, this time from just behind the half-court line to beat the buzzer at the end of the first half.

After an all-around complete performance, Frazier will need to continue his hot streak over the next few weeks, especially since the Illini will be on the road for four of their next five games.

“Dominant” is the best way to describe the seven-foot sophomore, and Cockburn used his size and strength to overpower Golden Gopher defenders all afternoon. Despite another impressive display, the Jamaica native snapped his four-game double-double streak, finishing with 22 points and six rebounds.

Cockburn was a beast in the paint and shot efficiently all afternoon, shooting 75% on 12 shots. His free throw shooting also drastically improved, as he converted all four of his free throws. His partnership with Dosunmu is one of the best in college basketball, and Cockburn finished multiple lobs from his partner in crime for rim-rattling dunks.

Defensively, the sophomore center didn’t allow any easy baskets, and his grit and toughness when Golden Gopher shooters back into him proved how far he’s come in his second year under Brad Underwood. Cockburn’s energy on both ends of the court will be vital for the Illini during the Big Ten and NCAA tournaments.

Following a mediocre performance against Northwestern on Tuesday, Grandison came out with a chip on his shoulder on Saturday, putting together one of his brightest performances in an Illini uniform. The Oakland, California native finished with 12 points, his highest total since coming to Champaign, four assists, three rebounds and one steal.

Grandison looked confident in his shot early, as he got to the free-throw line early before drilling two 3-pointers before halftime. His energy on the defensive end was also much improved from his performance on Tuesday, as he forced shooters into tough contested shots on multiple occasions.

His passing was also rather impressive, especially on a slick pass to Bezhanishvili in the paint. Like Frazier, Grandison’s all-around performance was a major boost for the Illini, and they will need solid performances from him moving forward, especially when his teammates are struggling offensively.

Miller has struggled with his consistency on offense this season, and his five points on Saturday once again proved this point, as he shot just 2-7 from the field, including 1-4 from behind the arc.

Though he has struggled to get his shots to fall, Miller has made up for his offensive woes with his high-tempo defense, which was on full display on Saturday afternoon. His intelligence and intensity on the defensive end is extremely important for the Illini, and it’s one of the biggest reasons why Miller has retained his spot in the starting lineup.

Despite his impressive defense, Miller had a few lapses in concentration on offense, including on a mishandled pass on a three-on-one fast break, though he quickly made up for it by feeding Dosunmu for an easy dunk. Miller’s emphatic dunk in the second half highlighted the Peoria native’s afternoon, and it showed what he’s capable of once he gets more confidence in his offensive abilities.

Tuesday was a night to forget for the freshman, but on Saturday, Curbelo looked like a completely different player, as he was confident with both his passing and his shooting. The Puerto Rico native finished with four points and four assists in the commanding win.

After an early turnover on a preventable travel, Curbelo settled in and found his groove. In the first half, the freshman guard took an inbound pass coast to coast, finishing the play with a clean layup. Just over a minute later, Curbelo grabbed a defensive rebound, spun 360 degrees and made a cross-court pass to Grandison, who was wide open in the corner, for three, which he buried.

In the second half, Curbelo made a crafty behind-the-back, no-look pass to Cockburn in the paint to set up one of his many dunks of the afternoon, though he didn’t see much playing time after falling off the court in a scary sequence midway through the second half.

Curbelo is known for his nifty passing and play-making abilities, and Saturday’s game was no different. This was one of his best performances of the season, but the freshman has yet to string together several solid games this year. Brad Underwood will be pleased with Curbelo’s showing on Saturday, but consistency is key for him moving forward.

Bezhanishvili followed up an impressive showing on Tuesday with a solid performance on Saturday, as the junior forward finished with nine points and three rebounds in the win.

The six-foot-nine-inches junior picked up right where he left off, as he looked confident on offense and settled in on defense after picking up an early foul. Bezhanishvili drew an and-one after good team passing in the first half, and he capped off his afternoon with a monster dunk in the second half. This aggression on offense is always important for the Illini, and it’s always good to get scoring off the bench and from people other than just Dosunmu and Cockburn.

After an underwhelming sophomore season, the Georgia native has bounced back this year, and he added to his impressive resume with a determined display on Saturday. If Cockburn gets into foul trouble going forward, Bezhanishvili proved he can fill in that gap off the bench when called upon.

Williams hasn’t had the strongest senior season thus far, but he has significantly improved on both sides of the ball over the last two weeks. On Saturday, the Peoria native scored three points, grabbed two rebounds and picked up two assists in the impressive win.

Over the last few games, Williams hasn’t been as confident with his three-point shooting, but he got good looks on Saturday and took two shots from deep, converting one of them. His ball distribution has also been a huge boost for the Illini, especially on Saturday.

Defensively, the senior guard looked superb, and his willingness to put his body on the line and take a charge allowed Williams to make his presence felt on the court. Despite losing his spot in the starting lineup, Williams has looked solid offensively and defensively, and the Illini haven’t lost a game since he was moved to a bench role.