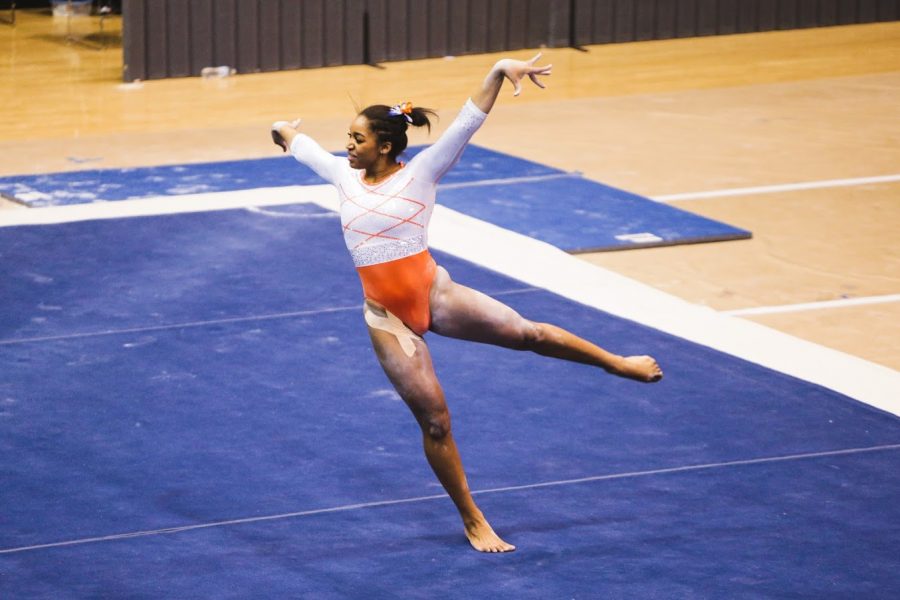 Junior Shaylah Scott performs her floor exercise routine during the meet against Iowa on Jan. 31. The Illini will face Michigan at Huff Hall today.

No. 20 Illinois finally hosts No. 7 Michigan this weekend after weeks of wondering when the postponed matchup was going to be rescheduled.

Originally, the Illini and the Wolverines were scheduled to face off on Feb. 6 but COVID-19 issues within the Michigan athletic department caused it to be delayed. Nearly two weeks later, 5-2 Illinois welcomes powerhouse Michigan.

If anything can be said about the Illinois women’s gymnastics team this season, it’s their only worry about what they can do. They don’t stress over what is out of their control, and their focus is on themselves and how they perform, not about others.

They improve every week, and it shows on the mat, as they have established a new season high in points over the last two weeks. Even with a perennial contender like Michigan visiting Huff Hall, they will be ready.

It also helps to have a gymnast in peak form like sophomore Arayah Simons. Against Penn State, she scored a 9.950 on floor, which ties for the second-highest in program history and the most since Lizzy Leduc in 2016.

Just based on Michigan’s record, it’s not known how legit they are this year. If the past is any indication, however, this is the biggest test for Illinois.

According to the Illinois record book, Michigan has won the Big Ten Championship 25 times since 1983, including the last six. The next closest competitor is Minnesota and Ohio State with five. Illinois only has one, as they won in 1990.

Since head coach Nadalie Walsh was hired in 2017, they have never beaten Michigan.