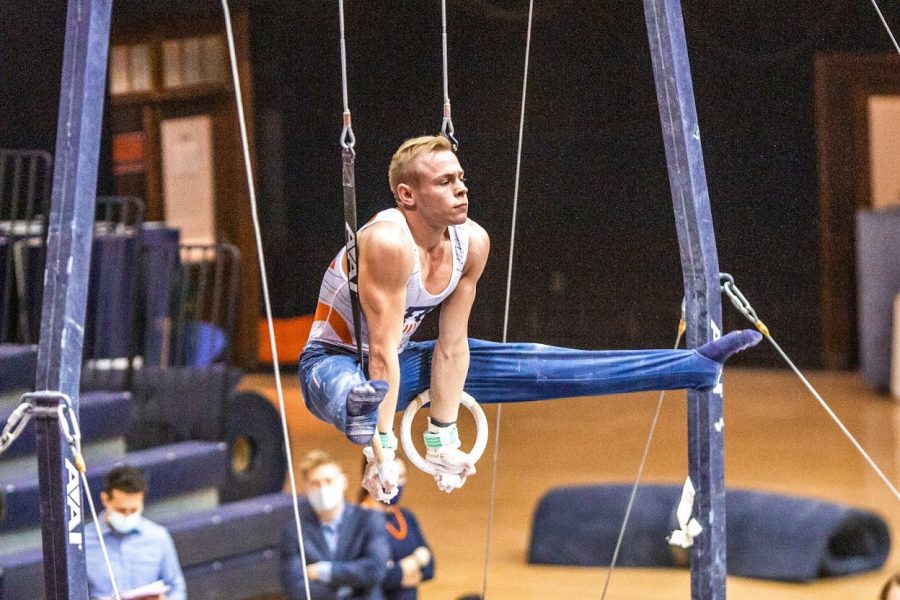 Junior Hamish Carter competes in the rings event during the meet against Ohio State on Jan. 23. The Illini will face off in a tri-meet against Michigan and Nebraska today.

After losing its last two dual meets, the Illinois men’s gymnastics team is in desperate need of a victory to turn its season around. Once ranked No. 3 in the nation based on average team score, Illinois has fallen to No. 7 in the rankings, behind every Big Ten team except Minnesota while standing at 1-2 against Big Ten opponents halfway through the season.

Things are not going to get any easier for the Illini when they face No. 2 Michigan and No. 3 Nebraska – the top teams in the Big Ten – in a tri-meet at Huff Hall on Sunday.

Illinois head coach Justin Spring acknowledges the challenge his team is facing to earn even one win against either Michigan or Nebraska, but he isn’t counting out his team just yet.

“It is not going to be easy against these teams. These teams are very good,” Spring said. “I think this could be anyone’s meet. You could argue one way or another that there’s a favorite, but I think it’s going to be a really close meet between three great teams.”

Nebraska is ranked in the top five on every apparatus except parallel bars, and Nebraska also outranks Illinois on every apparatus except still rings. The Cornhuskers lead the country on pommel horse, boasting four of the top 10 individuals in that event, and freshman Taylor Christopulos is only five one-thousandths of a point out of the No. 1 ranking on vault. Nebraska has split their two meets this season so far, losing to Penn State but defeating Minnesota with scores of 403.050 and 407.700, respectively.

“Nebraska has some big-hitting potential,” Spring said. “They’ve been a little shaky consistency-wise, but they put up big scores. They’ve got some powerhouse guys on their team.”

On the other hand, Michigan was unanimously selected No. 1 in the preseason Big Ten coaches poll and is favored to win the Big Ten team championship in April. The Wolverines are ranked in the top-5 of every apparatus except vault and lead the nation on high bar; the only apparatus on which Illinois outranks them is vault.

Senior Cameron Bock and sophomore Paul Juda are easily Michigan’s best gymnasts; they combine individually for five No. 1 event rankings, and on pommel horse, still rings and in all around, they are the top two gymnasts in the country

And all of that is after just one meet this season: a 409.000-328.100 blowout of UIC on Jan. 17. In just one meet, Michigan and its gymnasts set scores that most teams couldn’t top in two, three or even four meets.

“This is their big comeback. They didn’t do anything for those two weeks they were shut down,” Spring said of Michigan’s month-long break due to COVID-19. “They’ve had a week to prepare for this. They might be a little rusty. They might not be in the best shape, but they are, in my opinion, the strongest team in the Big Ten.”

The highest score Illinois has been able to achieve this season is 402.550, which it set against Ohio State on Jan. 23. In all of their meets this season, Michigan and Nebraska easily outscored that high point from Illinois. The 400.050 points that Illinois put up against Iowa a week ago is by no means a winning score against Nebraska nor Michigan, according to Spring. Defeating them would require a score that pushes 410.000.

While a ten-point gain may seem like a lot in gymnastics, it’s actually quite feasible.

“The fact is that you’re counting five scores on six events, that’s 30 counting routines. Do the math, it’s only three-tenths per routine,” Spring said. “On Monday, we went through every single athlete’s routine and identified where we can find three-tenths (to be made up). I think that they all did the work to get those three-tenths back. Will it show up in the meet? I hope it does, and if it does, that’s a ten-point gain.”

Students with a paid subscription, or whose device is connected to IllinoisNet wifi, can stream the meet on Big Ten Network + on Sunday at 4 p.m. Central Time.