lllinois falls to No. 7 Northwestern despite winning doubles point for first time 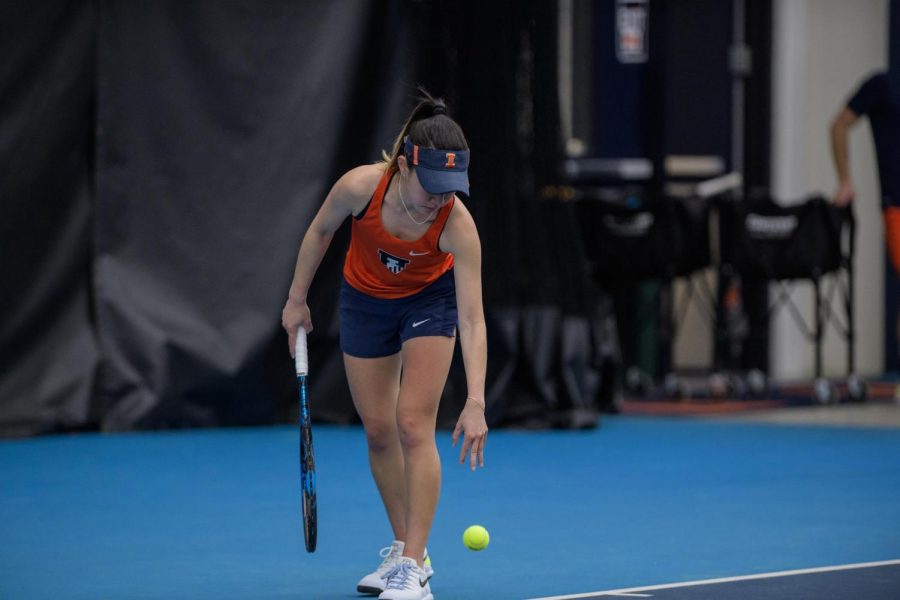 An Illinois women’s tennis player bounces the ball before serving during competition. The team fell to Northwestern 6-1 on Sunday.

The doubles point is just one point. Singles matches make up a majority of the meet’s score, but winning the doubles point gives the team momentum and brings them one step closer to picking up a dual-meet win.

On Sunday, the Illinois women’s tennis team wasn’t able to build off its doubles point victory, falling in all six of its singles matches against No. 7 Northwestern on the road and ultimately losing 6-1.

In its opening two matches against Iowa and Nebraska, Illinois lost the doubles point, eventually losing both meets. This match, the Illini set the tone early and looked eager to pull off the upset after winning the doubles point, but they ultimately ran out of steam.

After picking up the doubles point, the Illini looked like they could pull off one of the upsets of the season, as Duong, Frazier and Kawai all won the first sets in their respective singles matches. With the momentum in its favor, Illinois looked like it was on the brink of one of its biggest wins of the season.

The Wildcats had other ideas, however, as Yeah and Illini seniors Emilee Duong and Sasha Belaya lost in straight sets to give the Wildcats a 3-1 advantage with three matches still in progress.

Kate Duong couldn’t close out her match, falling in the second and third sets for her first Big Ten singles loss of the season. Frazier and Kawai also let their one-set leads slip through their fingers, and the Illini lost 6-1.

With the loss, Illinois is now 0-3 this season. The team will return to action next weekend with two home matches, as they host Wisconsin on Friday before welcoming Minnesota to town on Sunday. The Badgers are 1-2 this season, while the Golden Gophers are 0-3.