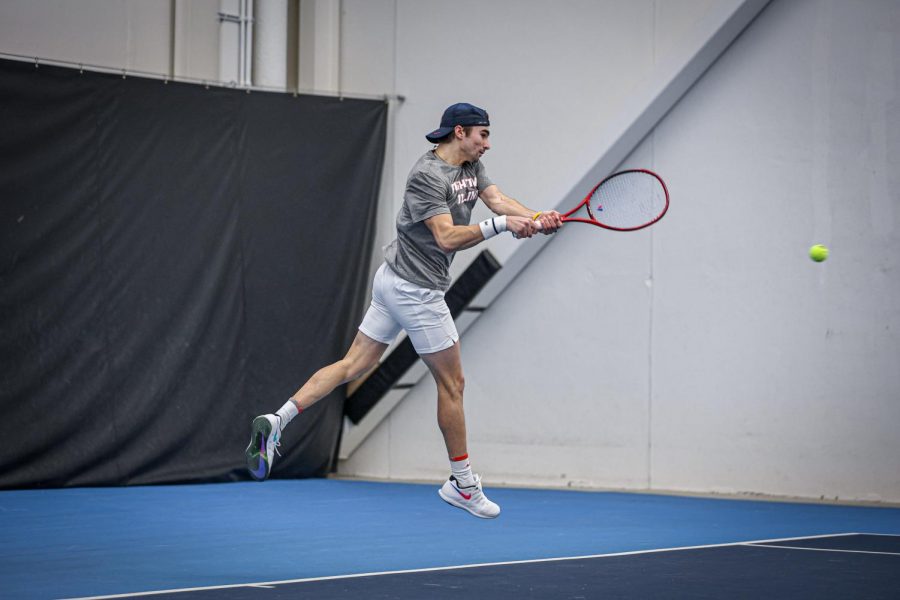 After unexpectedly placing third last weekend in the Intercollegiate Tennis Association National Team Indoor Championships, Illinois kicked off its Big Ten campaign this weekend with dual meets against Penn State and Ohio State. The Illini got the job done against the Nittany Lions on Friday, though they were handed a reality check on Sunday following a loss to the ninth-ranked Buckeyes.

The Illini struggled with doubles play last weekend, only winning one of three doubles points across three days of competition. Friday’s meet was a different story, as the team picked up the doubles point against the Nittany Lions. Freshman Hunter Heck and redshirt junior Alex Brown won their match, and senior Zeke Clark and redshirt freshman Alex Bancila clinched the doubles point to give the Illini a 1-0 lead heading into singles play.

Clark hadn’t lost a singles match yet this season, and that streak continued on Friday, giving Illinois a quick 2-0 lead after he won in straight sets. Heck, who has had an up and down start to the season with a record of 2-2 in singles matches, also won his match in straight sets to extend the Illini’s lead to 3-0.

After posting a 10-13 record in singles matches last season, Bancila picked up his second singles win of the year to seal the win for Illinois.

Redshirt sophomore Siphosothando Montsi also continued his undefeated start to the season in singles play, while Brown and junior Kweisi Kenyatte fell in their respective matches to send the final score to 5-2.

On Sunday, the Illini didn’t have the same success in doubles play, as they fell in two of the three matches. Bancila and senior Aleks Kovacevic were the only Illinois pair to get a doubles win against Ohio State.

Singles play also proved to be a challenge for the sixth-ranked Illini, as Brown, Heck and Kenyatte all fell in their respective matches to seal the win for the Buckeyes. Kovacevic picked up the lone singles win for Illinois, as Clark and Montsi’s matches were both unfinished in the 4-1 loss.

With their results this weekend, the Illini are now 4-2 overall and 1-1 in Big Ten meets this season. The team will look to right the ship next weekend, as they have their first two away matches of the season. They will first travel to Madison on Friday to take on Wisconsin, who Illinois beat in a preseason friendly on Feb. 9, before heading to Minneapolis to take on Minnesota on Sunday.