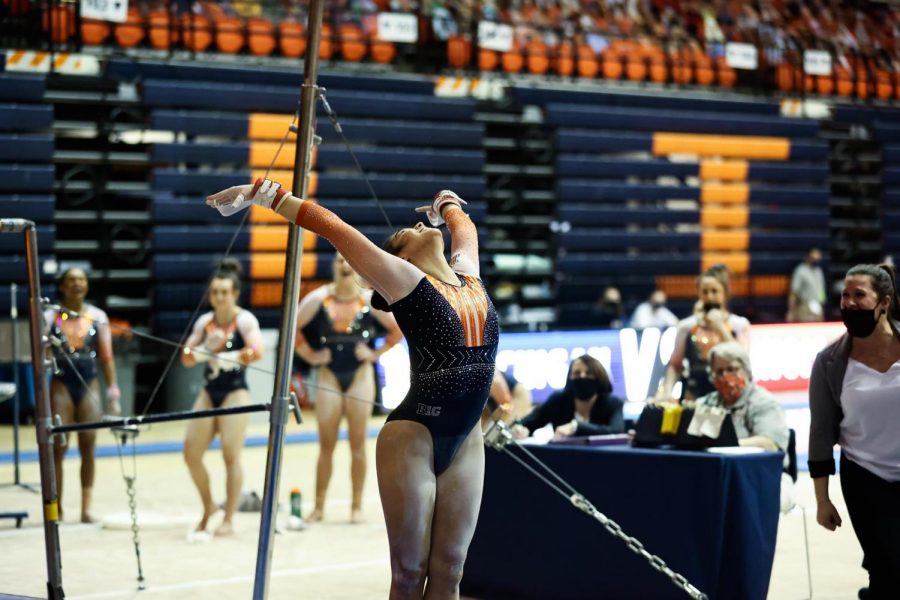 Sophomore Mia Takekawa poses after finishing a routine during the meet against Michigan on Sunday. Illinois lost the meet 197.375-196.650.

“The team did an outstanding job staying really focused and unified,” said head coach Nadalie Walsh. “I love their confidence, I think they did a really great job and I’m really proud.”

Senior Nicole Biondi also competed in the all-around competition. She scored a 39.325 but came in third place against Michigan’s junior Natalie Wojcik and sophomores Sierra Brooks and Gabby Wilson. Her score was lower than last week’s 39.350 but a senior can be trusted to bounce back.

All of those records were impressive but none more than Mizuki’s. Her beam title winning 9.900 was her personal best on the event and this was in her first meet back since her injuries.

“To have her come back from two separate ACL tears and to be completely ready to go is just amazing,” Walsh said. “It’s one of the greatest victories and feelings as a coach to know she has battled back from so much. I’m so proud of her, and she deserves it; she worked really, really hard.”

This loss comes off last week’s win against No. 31 Penn State where they had gotten a season-high of 196.300.

With an 0-2 home record, it’s the worst start at Huff during coach Walsh’s tenure and the worst home start since the 2015-2016 season.

However, it’s not often a team can have its two home losses be on days where they broke their season-high.

The potential is there and their 5-1 road record is as good as it gets. They are excited for the Big Five Meet and won’t let this loss stick with them for very long.

“Even though this was our season-high there are some things they [the gymnasts] are going to want to fix and improve. We are going to continue working and continue to dig deep,” said coach Walsh.

Next, the Illini travel to College Park, Maryland. for the Big Five meet against four other teams. This mini-tournament is a great indicator for the seeds for the Big Ten tournament in March.