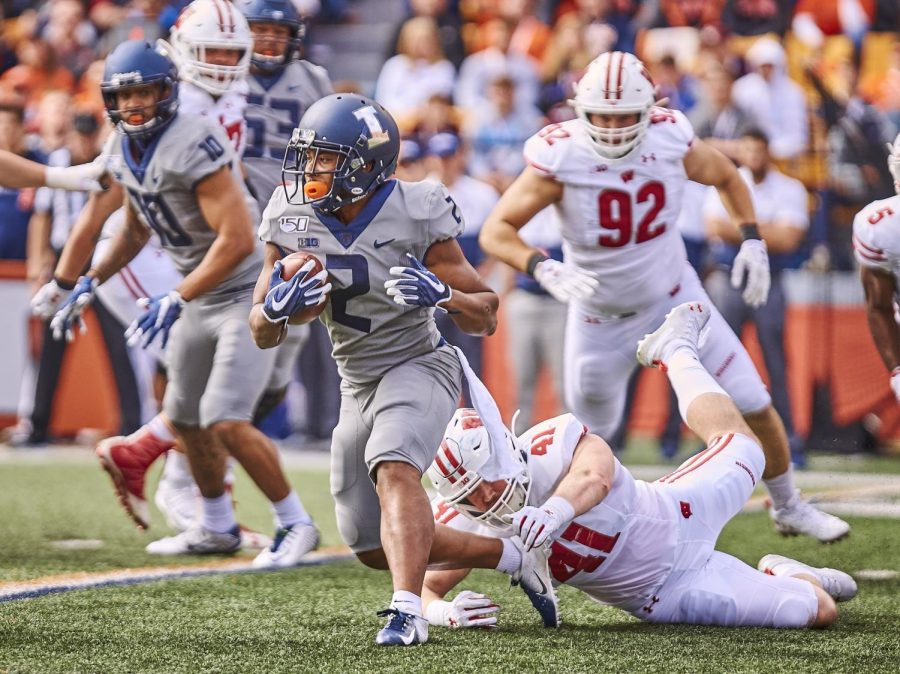 Former Illini running back Reggie Corbin rushes the ball during a game against Wisconsin at Memorial Stadium on Oct. 19, 2019. Corbin signed a deal with the BC Lions in Canada to continue his playing career.

But with his college days over a year past him now, the All-Academic Big Ten tailback isn’t ready to hang up the pads just yet; Corbin is going over the northern border, signing a deal to play for the BC Lions, a former Canadian power that’s hungry for a return to prominence.

“I couldn’t have picked a better team, especially with the indoor (stadium) and the great city of Vancouver,” Corbin said. “The orange (team color) runs through my blood a lot since being at Illinois.”

Corbin, who stands at 5-foot-10 and 200 pounds, never had a quarterback at Illinois who could consistently keep defenses honest at the line of scrimmage. With the American structured style of play, running backs could sometimes be like sitting ducks, ready to get swarmed by the front seven.

But Canada plays it differently than its southern neighbors. Skilled players don’t sit in one place, as any kind of motion is all right as long as enough players are on the line. Corbin, who plays shifty, will be able to have a head start this time around.

Corbin’s career with Illinois marked a time of stagnation within the program, though that was by no means his fault.

Signed by Tim Beckman, redshirted under Bill Cubit and given the starting position by Lovie Smith, Corbin was a steady presence for a program dying for any sort of success.

But Corbin had his own problems to worry about, too, dealing with two injuries in three seasons that robbed him of valuable playing time. While Corbin had a productive freshman season, he was still an unknown quantity heading into his explosive junior season.

Hiring a run-heavy, spread option pioneer — Rod Smith — definitely helped Corbin put up video-game numbers, but the tailback’s ability to finally stay on the field was the top factor. Playing in all 12 games, Corbin ran for over 1,000 yards and scored nine touchdowns, while averaging 8.6 yards per carry.

After helping lead the Illini to relevance, Corbin expected the next chapter of his life to start in the National Football League. But the NFL is cutthroat, and the Washington D.C. native never really got a shot — though it’s still on hold.

Instead of locking himself away and feasting on McDonald’s Grubhub orders, Corbin used the COVID-19 lockdowns to prepare himself for a career he’s still pursuing, as he now thinks he’s bigger, faster and stronger.

“It’s tough (training) in college because you do workouts that (are) catered towards 105 people,” Corbin said. “Now you do (workouts) every day that’s all about your strengths and weaknesses.”

With those improvements, Corbin thinks he’s ready for the Canadian Football League from a physical standpoint, as he believes his Illinois days shrink in comparison. The CFL is offering more than a paycheck; it’s offering the chance for Corbin to develop his football IQ.

“Seeing different types of coverages, especially since it’s 12 people now, it’ll expand my knowledge of the game, and it’ll teach me a little bit,” Corbin said.

Corbin’s best game at Illinois will always be the 2018 meeting against Minnesota, where the then-junior gashed the Gophers so badly — running for 213 yards on just 13 carries — P.J. Fleck fired his defensive coordinator.  His ability to be patient before running up the sidelines made him one of the most explosive running backs in a conference dominated by running games.

The NFL has not called Corbin yet, but plenty of players in the league had to start in another league before finally getting the call. Even if it’s not what he had in mind, Corbin isn’t bitter and plans to use the trip over the border as a chance to chase his dream.

“My agent called me and said, ‘This is what we are doing,’” Corbin recalled. “I had three days to decide, so I looked it up, and I fell in love with it.”