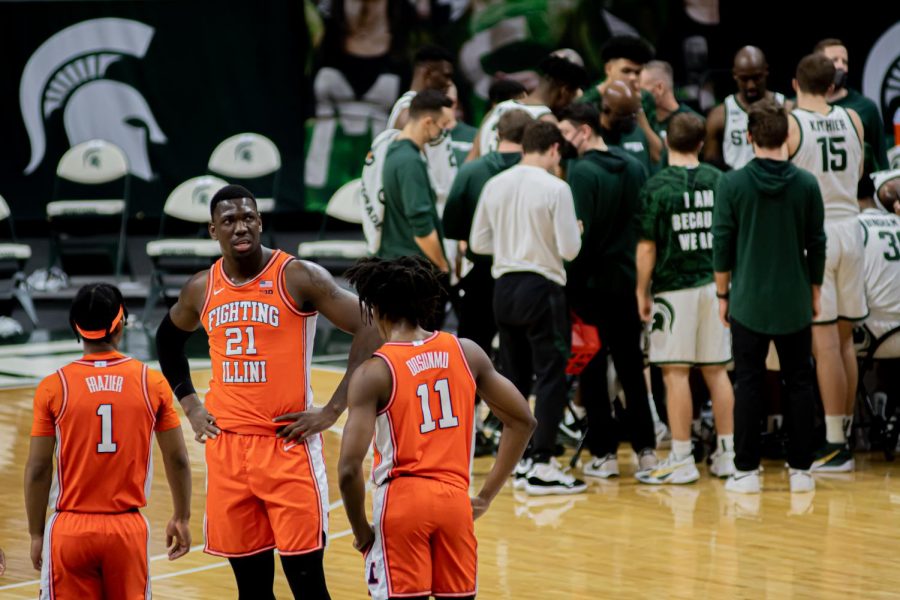 Trent Frazier, Kofi Cockburn and Ayo Dosunmu stand together on the court during Illinois’ game at Michigan State. The Illini lost 81-70.

With No. 5 Illinois making a second-half push, their star junior guard Ayo Dosunmu was at the free-throw line. Michigan State forward Mady Sissoko just committed a flagrant two foul on Dosunmu, giving Illinois two shots and the ball down 10.

“We had a chance as bad as we played, as many free throws as we missed, as many layups as we smoked,” head coach Brad Underwood said. “Our two heroes didn’t play very well in Ayo and Kofi. Yet we have a chance after a flagrant foul to cut it to six.”

The Spartans are undersized, but their big man coalition of Marcus Bingham, Mady Sissoko, and Julius Marble did a good job limiting Kofi Cockburn. Cockburn struggled, finishing with 13 points, going 3-11 from the line and 5-11 from the field. Underwood attributed Cockburn’s off night to the free-throw line.

“What does he have, 25 if he makes free throws?” Underwood said. That’s what I meant when I said they were going to muck it up. They got five guys that they can throw in there. We were trying to throw it in there and maybe a little too much and he got out of a little bit of rhythm early.”

The Illini showed some resilience at the end of the first half. Coleman Hawkins made two free throws and they cut the lead to seven. But Joey Hauser hit a three and made a free throw to end the half and get the deficit back to double digits. It was the first time Illinois trailed by 10 at the half since they lost to Ohio State.

Illinois has dug out of halftime deficits before, but the Spartans made sure early that that wouldn’t be the case. A Cockburn layup made it a 42-31 game, but then the Spartans made another push. Josh Langford got to the rim for a layup, Watts split a pair of free-throws, Henry made two free throws, Watts hit a jumper and Henry converted a layup to give Michigan State their biggest lead at 18.

Illinois would make it more competitive in the second half, implementing some full-court pressure to make the turnover-prone Spartans anxious. A Curbelo layup cut the lead back to 10, but the Dosunmu missed free throws and Watts floater put the nail in the coffin. The free-throw shooting hurt them all night, missing 15 of their 34 attempts.

“We got to the line 34 times. Let’s do that again on another night and see what the outcome is,” Underwood said.

The loss is by no means the end of the world for Illinois. They’ll likely still be a two seed in bracketology. But, their hopes of winning a Big Ten title are no longer in their hands and a potential one-seed may be out of reach. Upcoming games on the road at Wisconsin, Michigan and Ohio State will give Illinois the opportunity to correct some of the mistakes they made Tuesday.