Illini give up early lead, lose to Wildcats 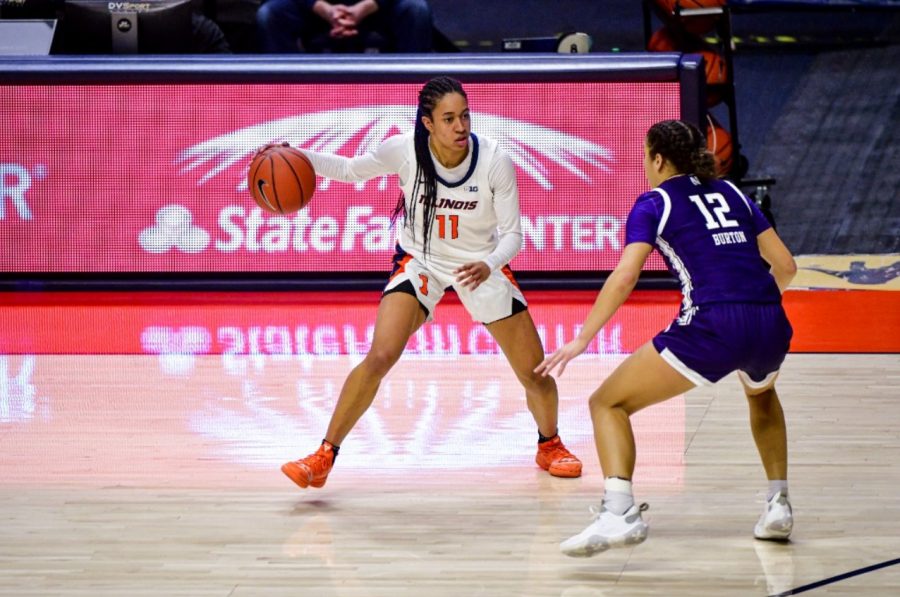 Sophomore Jada Peebles attempts to evade a defender during the game against Northwestern on Wednesday. The Illini lost the game 67-61.

The Illinois women’s basketball teams were unable to pull off the upset as they fell to Northwestern 67-61 on Wednesday night.

The Illini got off to a big start as they dominated the first quarter. Illinois’ defense played tough against Northwestern, forcing the Wildcats to shoot 13% from the floor in the period. The Illini offense was also clicking, as Illinois led 18-4 with 3 minutes left in the first.

“We worked a lot against their zone,” said head coach Nancy Fahey. “There was good ball movement, we made the extra pass which gave us open threes versus contested threes. We spent a lot of time on overloading their zone and it worked in the first quarter.”

Illinois was riding high after one, leading Northwestern by 10 points after one quarter. This was a good sign for Illinois as the first meeting saw Northwestern gain a big lead early and coast the rest of the way. Unfortunately for Illinois, that would not be reciprocated.

Northwestern came out in the second quarter firing. The Wildcats shot 55.6% in the quarter and added two threes to their total. However, the catalyst for Northwestern was its defense.

“They started applying a little more pressure and we started turning over the ball more,” said sophomore forward Solape Amusan. “They were scoring off our turnovers and I feel like we just let them speed us up a little too much.”

The Wildcats ended up outscoring Illinois by 19 points in the second quarter and went into halftime leading 31-22.

In the third quarter, Northwestern continued to add to its lead. Their senior guard, Lindsey Pulliam, started to make some tough shots and the Wildcats built their lead as high as 15 points.

It looked as though Northwestern was going to easily take the win, but the Illini put together a late fourth-quarter run to bring themselves back in the game.

A steal by freshman guard Aaliyah Nye followed by a three of her own brought Illinois within five points, but with just 30 seconds left time was running out.

Another Nye three with eight seconds left in the game cut the deficit to four, but Northwestern’s junior guard Veronica Burton iced the game away with two free throws.

Despite the Wildcats starting the game missing their first 12 shots, they turned around their offense and shot 44% in the last three quarters. The main reason behind the win was Northwestern’s ability to force 29 Illinois turnovers.

This is a recurring issue now. The Illini have now turned the ball over at least 20 times in each of their last four games, losing them all.

The Illini will head back on the road for their next game, taking on Purdue who they beat earlier this year.