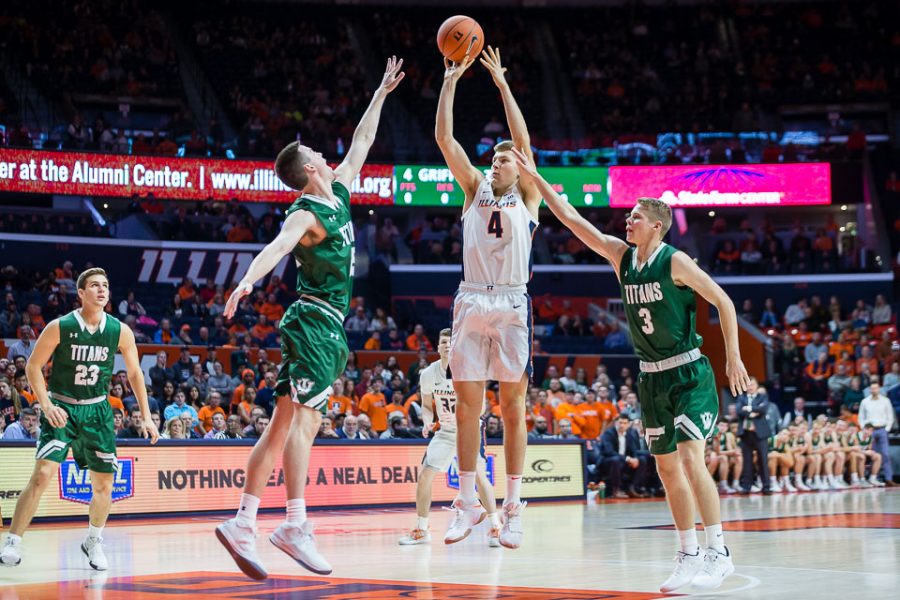 Illinois forward Zach Griffith (4) shoots the ball during the game against Illinois Wesleyan at State Farm Center on Friday, Nov. 2, 2018.

It’s rare for a mid-January practice to be considered memorable, but Brad Underwood vividly remembers one practice leading up to the Wisconsin game in 2020.

Then-junior walk-on forward Zach Griffith was assuming the role of Wisconsin forward Nate Reuvers. The scout team, which consists of walk-ons and scholarship players that are unlikely to see game action, is responsible for giving the starters a look at what the opposing team will play like. On this particular day, the 6-foot-6 Griffith was responsible for emulating the 6-foot-11 Wisconsin stretch big. It was a day neither Underwood nor Griffith would forget.

“I literally couldn’t miss,” Griffith said. “I felt bad because I was taking terrible shots, and I couldn’t miss. It’s been fun. … Scout team is a lot of fun because you don’t have much to lose.”

“Zach’s a heck of a shooter,” Underwood said. “When he gets it going, he’s a hard, hard guard.”

Griffith’s path to Illinois was an uncommon one. He grew up just 22 miles north of Illinois, attending Fishers Senior High School. It’s not an area known for producing college athletes, so much so that Griffith remembers his junior high coach saying if any of them went Division I, he would “eat a shoe.”

Griffith was a star at Fishers, a 1A school, averaging 17 points and 10 rebounds. He set the school record for points with 1,308 in just three seasons. After high school, playing basketball was not in Griffith’s plans. With no offers, he only applied to one school: the University of Illinois.

“I didn’t apply to any other schools,” Griffith said. “I never went on another visit. I knew since grade school this was the school I wanted to be at.”

Griffith joined the men’s basketball program as a manager his freshman season, but with Illinois’ need for another practice player, the team decided to offer him a walk-on spot for his sophomore season. The call from director of basketball operations Joey Biggs nearly brought Griffith to tears.

Since then, Griffith has been a key part of the scout team. Underwood praised his work ethic and ability to shoot from deep. He also loves how “Zima,” a nickname for Griffith given to him by assistant coach Chin Coleman, pushes his teammates.

“Tyler (Underwood) and Zima talk more trash than anybody else,” Underwood said. “Those guys get going, and they love to heckle the first group.”

Griffith also leads by example off the court. He’s a two-time All-Big Ten academic selection. Whether he’s at the hotel or even getting Covid tested, it’s no surprise to see a book in Griffith’s hand. One of his favorite things to do on road trips is going for walks. He loves checking out new campuses, listing Duke, Missouri and Michigan State as some of his favorites.

Thursday night will be Griffith’s final home game of his college career. His parents won’t be walking out with him on senior night, but they will be joining him on a Zoom call while in their home just 30 minutes away.

Griffith has tallied just eight career points, and with the schedule tightening up down the stretch, it’s not a guarantee that he sees the court again. His hard work at practice and in the classroom, however, will leave a positive impact on this basketball program.

“That guy’s about everything that we want to be about,” Underwood said. “He’s a straight-A student. He’s a guy that takes his time in the weight room extremely serious. He’s a health-nut, he’s vocal, everybody likes him; it’s a match made in heaven. He’ll always be part of the Illini family and a big part of it.”