Illini of the Week: Feagles dominates in Mobile after returning for fifth season 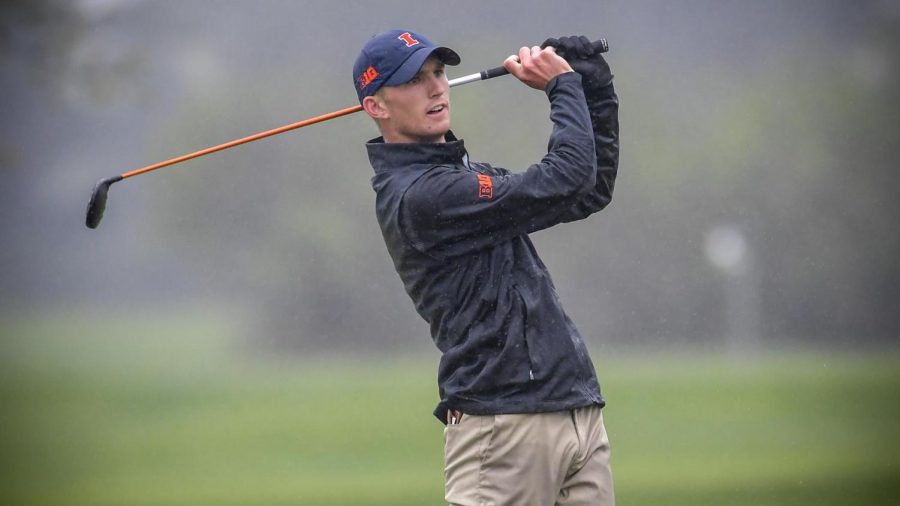 Senior Michael Feagles watches his ball after a swing during competition. Feagles has been named the Illini of the Week following his first-place finish at the Mobile Bay Intercollegiate.

In a perfect world, Michael Feagles does not win the Mobile Bay Intercollegiate. In a perfect world, the COVID-19 pandemic does not change everything. If all things went as he planned, Feagles would be an Illinois alum on the professional golf circuit. Last year, plans changed for everyone; the world changed.

When the World Health Organization announced that the COVID-19 outbreak had reached pandemic status last March, the Illinois men’s golf team had just started its season, a season which was supposed to be Feagles’ last.

“I had my senior season ripped away last year,” Feagles said. “I drove back to Arizona thinking I might never be able to represent the orange and blue again.”

Of course, it wasn’t just the NCAA making cancellations. The PGA canceled its Korn Ferry Tour, which is an avenue for collegiate golfers to transition to the PGA Tour. For Feagles, this meant turning pro would have to wait.

Fortunately, the NCAA gave athletes an additional year of eligibility to make up for the lost season, but things did not go back to normal. The team continued to train amidst a summer of uncertainty and political unrest, knowing there would not be a fall season either.

Still, they returned to campus in August.

“Coming back this year and getting that opportunity one last time, it places an importance on you,” Feagles said. “You can’t take this time for granted. This is a very important time in your life, and one day it’s not going to be here any longer.”

With his performance at the Mobile Bay Intercollegiate last week, Feagles validated all the hard work the men’s golf team has put in over the last 11 months. Feagles gave an inspiring performance, leading from start to finish. He posted a personal-best 54-hole score of 200, which is also good enough for the second-best score in Illinois history.

He scored a par or better on 52 of the 54 holes and led the tournament with 18 birdies. The win was almost never in doubt for Feagles. After posting a tournament-best 67 in two consecutive rounds, he bested himself and posted a 66 in the final round.

Feagles’ ability to stay focused while in the lead speaks to the maturity that head coach Mike Small said he brings to the team. It is a skill that Feagles was missing when he first came to Illinois in 2016, and one that cost him several wins early in his career.

“When I was younger as a freshman or sophomore, a lot of times in the lead going into the final round, I would kind of freeze up and play a bit more scared, a little more tentative,” Feagles said. “I’d end up finishing top five and not winning.”

He credits his improvement in this area to the help from Small and the team’s mental coach, though Small has been especially important in Feagles’ career.

For a prestigious golf program like Illinois, winning is expected. According to Feagles, “learning to win” is one of the main reasons he came to Illinois.

While attending high school at Brophy College Prep in Pheonix, Arizona, Feagles finished second in the state championship his senior year and left high school without achieving his biggest goal.

This failure has played a part in motivating Feagles to push himself at Illinois.

“He’s worked as hard as anybody I’ve had,” Small said. “He’s been improving every year since he was a freshman, and he’s come a long way.”

A long season lies ahead for Feagles and the Illini, as one win is not enough to predict a sixth straight Big Ten championship. Regardless, it is a good sign that team is capable of weathering change and enduring challenges.

Though plans have changed, Feagles’ focus has not.

“This team has got eyes on winning the biggest of them all: A national championship,” Feagles said.