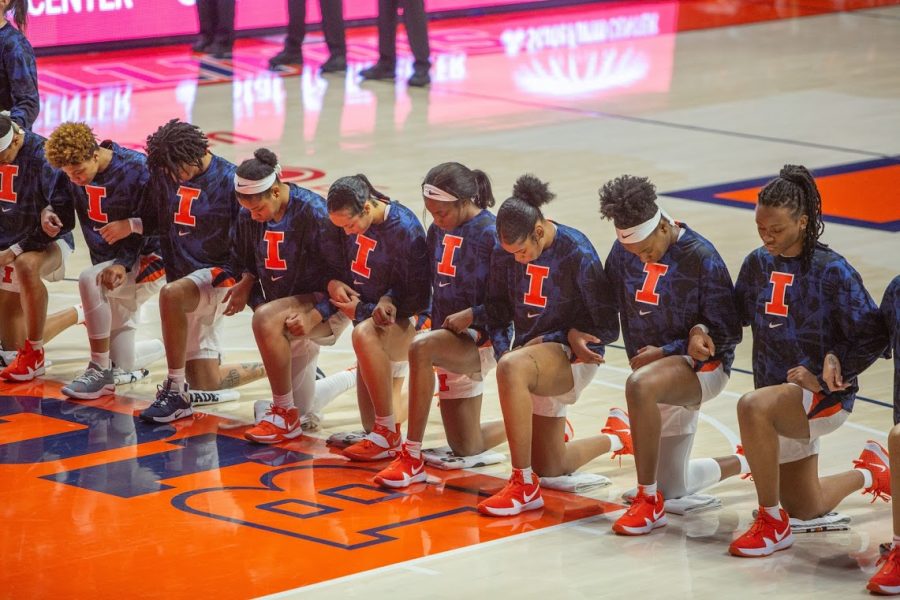 Members of the Illinois women’s basketball team kneel during the national anthem before the game against Valparaiso on Dec. 2. The team is celebrating Black History Month in multiple ways.

Before every Illinois women’s basketball home game, “Lift Every Voice and Sing” echoes around State Farm Center; this is one way the Illini are celebrating Black History Month.

“Lift Every Voice and Sing” is known as the Black national anthem, and James Weldon Johnson wrote it in 1899. The NAACP made it the “Negro National Anthem” in 1919, according to CNN. That came over a decade before Herbert Hoover declared the “Star-Spangled Banner” as the United States’ national anthem.

More recently, Alicia Keys sang “Lift Every Voice and Sing” before a Kansas City Chiefs game in September, and that was the first time many Americans heard the song.

As many people across the United States have taken the time to educate themselves on Black history over the past year, as well as during the month of February, the Illinois women’s basketball team has as well, taking time during each practice to learn about Black history.

Head coach Nancy Fahey is educating herself on Black history, and she frequently speaks out in support of Black Lives Matter and against systemic racism on social media. She attended a Black Lives Matter rally alongside men’s basketball head coach Brad Underwood and athletics director Josh Whitman in June, and she tweeted out a statement in August to reiterate her commitment to work for racial justice.

The team starts off practice each day with a “positive circle,” where players can share what’s going on in their lives away from the basketball court with their teammates and coaches. Fahey began the activity when she began coaching, and the idea was for her players to share good things that happened to them away from basketball.

“I started (it) when I first started coaching,” Fahey said. “What I noticed is that when you get to a gym, most of the time you only hear coaches talk, and they have the circle then give what they feel. What I’ve discovered is there’s a lot going on in our players lives also, and sometimes when you’re in the midst of going to school, going to practice and repeating, we forget what in life is happening well … it really just started with people sharing if something happened good to them.”

Sometimes, players discuss Black history during “Positive Circle,” and Fahey said the team tries to keep the conversation going beyond just the times when the public discourse focuses on it.

“We do that throughout the year,” Fahey said. “We start every practice with that, and sometimes there may not be (any) players on that, and we don’t force it. So no, it’s a year-round and cultural thing we’ve done since I’ve been here.”

“I’m really proud to play for a coach that invests time in those kinds of things and that cares about Black history, and learning about Black culture and things like that,” said redshirt junior center Eva Rubin. “I know that there’s been a recent surge of wanting to learn more and wanting to embrace Black culture even more in the recent months, so to have my coach really step up to the plate and be a leader in that area has been really great.”

The team takes turns sharing with each other, and a different player shares something each day. Sometimes, the people or events they discuss are ones they knew about before the discussion, but they still enjoy hearing from their teammates and seeing other teammates who might not have known about the person or event learn about it.

“My teammate, Aaliyah Nye, when it was her turn to go she talked about Madam C.J. Walker, who was the first Black woman millionaire, so that was really cool to have her bring that up,” Rubin said. “I was familiar with her, but to see my teammates be interested in hearing that story was really cool.”

The Illinois women’s basketball program has also recognized Black History Month in other ways, including a tweet that featured a video of the team sharing what Black History Month means to them. They also wear warm-ups before games with, “I am — ” and the players fill it in with names of Black people who have been murdered, including Emmett Till and Sandra Bland, among others.

Before games, most of the team kneels during the U.S. national anthem. National Football League quarterback Colin Kaepernick was the first professional athlete to kneel during the national anthem in 2016, and he has not played in the NFL since.

The NCAA has allowed kneeling during the national anthem at championships since at least 2017, when it sent a memo to schools, reminding them athletes are allowed to kneel, per The New York Times.

Conferences have jurisdiction over kneeling during regular-season conference games. Big Ten commissioner Kevin Warren stated in June that Big Ten athletes would be permitted to kneel during the national anthem before sporting events when they returned.

The Illini take a knee before the game, and the coaching staff, including Fahey, kneels during the national anthem.

“I think it makes a statement to a lot of people and for us ourselves, just knowing that something that we all personally care about is being expressed in a sport that we love, and that there’s other people around us that are backing us as well, like with our coaches, staff and people around us,” said sophomore forward Kennedi Myles. “They just care a lot about stuff outside of basketball that really affects us as athletes.”