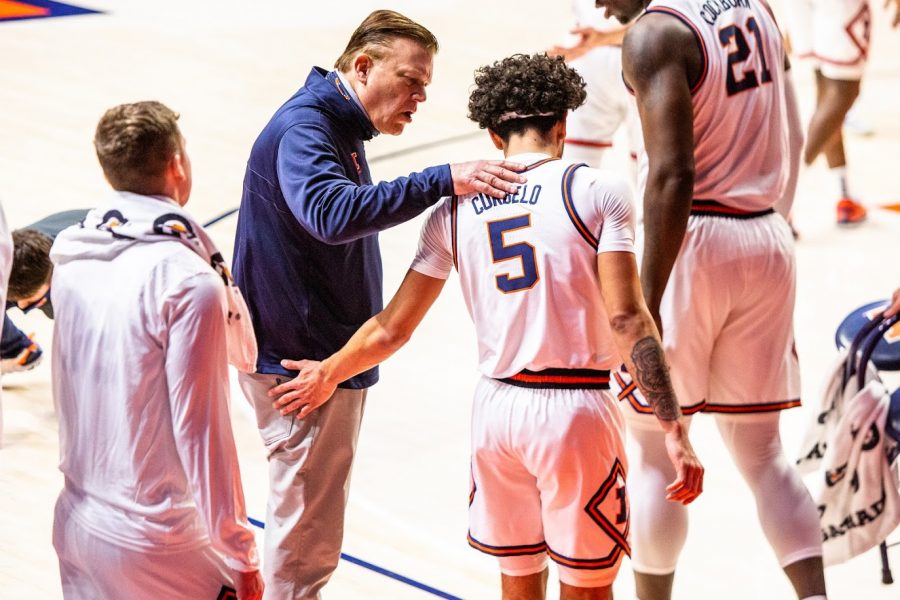 On Saturday, Illinois traveled to “The Barn” and put together its most complete game of the season, dominating in every facet of the game to take down a Minnesota squad that had only lost one home game heading into the contest. Ayo Dosunmu picked up his second triple-double of the season, Jacob Grandison scored a career-high 12 points and Trent Frazier played lights-out defense in the blowout win.

Tuesday night was a different story, as Illinois looked sluggish and tired for all 40 minutes. Missed layups and free throws plagued the Illini all game, and the Spartans came away with the hard-fought 81-72 upset win.

Though these last two games have demonstrated how unpredictable the Big Ten is, they’ve also shown how important it is for the Illini to bring energy and pace every game, regardless of their opponent. Let’s take a look at some big questions following Tuesday’s loss.

Where will production come from if Ayo Dosunmu and Kofi Cockburn have off nights?

Dosunmu is this team’s backbone; when he has an off night, the team also seems to have an off night. The Chicago native has made big shots during each of his three seasons in Champaign, so fans can’t be mad at him for having a rough game every once in a while.

Like Dosunmu, Cockburn often takes over for the Illini offensively any time the team is stuck in first gear. His size and strength in the paint are hard to contain, so it comes as no surprise that he finishes with a double-double almost every game.

But what happens if the Illini’s top two scorers have off nights?

Trent Frazier is certainly one of the lead candidates to fill that gap, and he finished with a game-high 22 points on Tuesday night after shooting 7-13 from the field, including 4-8 from beyond the arc. The Florida native has found his groove offensively over recent weeks, as he averaged 14 points per game across the Illini’s seven-game win streak. His scoring and defensive dominance were two of the biggest reasons why Illinois pulled out close wins over inferior opponents, and he’ll need to step up if Dosunmu and Cockburn aren’t able to get their shots to fall.

Freshmens Adam Miller and Andre Curbelo will also need to take it up a notch. Curbelo played his part on Tuesday, going for 12 points, while Miller wasn’t able to make an impact, as he finished with just two points in the loss. Miller has grown more confident in his 3-point shooting of the last few weeks, and he’ll need to get into a rhythm from deep going forward if his teammates aren’t getting good looks.

Curbelo, meanwhile, found success in the lane on Tuesday, though that hasn’t always been the case over the last few weeks. His sloppy turnovers and lapses in judgment have caused Illinois’ offense to stall. Though the Illini have been able to overcome these turnovers against weaker Big Ten foes, higher quality teams in the Big Ten and NCAA tournaments will punish you. Though he went 5-7 on Tuesday, Curbelo will need to step up even more if Dosunmu and Cockburn struggle to get going.

Giorgi Bezhanishvili is the final candidate in terms of filling in for Cockburn’s production. We saw that potential against Northwestern on Feb. 16, as he scored 10 points in the first half while Cockburn sat on the bench after picking up two quick fouls in the first half. The Georgia native didn’t score on Tuesday, and that needs to change if the Illini’s other big man struggles to score or needs to sit due to foul trouble.

Last season, Underwood’s squad averaged 12.1 turnovers per game, though they were still able to finish with a 21-10, good enough for fourth place in the Big Ten.

This year, the Illini are a much more complete and well-rounded team, and the expectations for this squad are similar to those of the 2005 team. Though they have been able to grind out wins despite having a tough Big Ten schedule, the Illini are averaging 13.3 turnovers per game this season through 22 games.

Once March approaches, this turnover issue could come back to haunt the Illini; in their six losses this season, the Illini are averaging over 11 turnovers per game. Though this number is below the team’s average this season, games in the NCAA tournament could come down to one or two possessions.

Free throws were a major issue for the Illini on Tuesday, something that has been an problem for the team all season. As a team, Illinois is shooting 69.2% in Big Ten games this season, which is the fourth-worst percentage in the Big Ten. On Tuesday, the Illini shot 19-34 at the line, while the Spartans went 13-20.

Cockburn gets the free-throw line the most frequently for Illinois, yet he shoots a dismal 56.2%, and he went 3-11 on Tuesday. The Illini need to be able to rely on their big man when he’s at the line, especially during high-pressure situations in March.

How high is Illinois’ ceiling in the NCAA tournament?

If one were to assess the Illini’s chances of making deep runs in the Big Ten and NCAA tournaments based solely on their performance against the Golden Gophers, a Final Four run — or further — would be a realistic assessment.

After a lackluster, slow-paced 40 minutes against the Spartans, the Illini look like second-round upset candidates.

This lack of consistency and energy is shocking, and it’s something you can’t be worrying about this far into the season. Free throws, turnovers, sloppy transition defense and a slow-paced offense are all huge causes for concern.

Tyler Underwood is the only current Illini who has played on a team that made an NCAA tournament appearance, though he didn’t get any playing time. It’s interesting to think about whether Dosunmu, Cockburn and the rest of this Illinois squad can continue to grind out results and make big shots without any tournament experience.

This team has the talent to make a deep run in March Madness. But if these issues aren’t addressed, the Illini could risk losing Dosunmu to the NBA without anything to show for his historic resume in Champaign.